The Sargents have improved seed placement and crop establishment through the purchase of their 18m seeder bar.
Photo: Hart Field Site Group

Farming on the sandy clay loams of Crystal Brook in the upper mid-north of South Australia, the Sargent family have been early adopters of no-till farming since 1999 and believe that crop establishment is key for success.

The Brook Park property is operated by Andrew and his parents Malcolm and Jane Sargent, with the broadacre cropping enterprise consisting of wheat, barley and oaten hay, followed by a break crop of canola or lentils. The average annual rainfall at the property is 400mm, with the program relying on an annual growing season of 300mm.

Around ten years ago, the Sargents invested in a new seeding system after previously using a single disc seeder for two years. “We were not achieving the results we wanted which is why we went back to a tyne machine,” Andrew says. They decided on a Flexi-Coil ST820 seeder bar which Andrew said has enabled them to improve crop establishment on-farm. 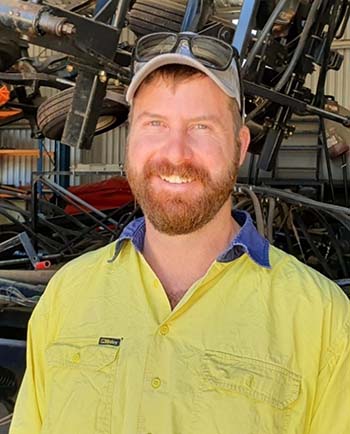 The inclusion of root boots to the machine has allowed the Sargents to improve seed and fertiliser placement.

Moving away from a single disc seeder to the knife point press wheel system was instigated by stubble handling issues, in addition to poor seed placement and herbicide damage. “By moving away from the disc seeder, we were able to improve overall crop establishment by better managing large stubble loads at seeding time,” Andrew says.

“We are also finding that hair pinning on sandy soils is no longer a problem.

“Our aim has been to maintain a good amount of stubble without reducing crop germination.”

“The suitability for coarse seeds is good, but it has been very susceptible to minor changes when using small seeds like canola,” Andrew says.

“The distribution of canola seed has been average and although some improvement has been seen since having the Flexi-Coil, variation in the distribution across rows has been observed.

“We normally check our calibration every 10 to 15 hectares when sowing canola as it’s a relatively expensive crop to invest in.”

Andrew believes the sensitivity of small seeds comes back to fan speed. “Getting fan speed right has been an issue in the past and it is critical to get it right as small variations in fan speed affect distribution and rate.”

“You are already on the back foot if you’re not achieving desired plant density for maximum yield.”

Andrew believes that timeliness of sowing is one of the most important factors to good crop establishment and they sow as quickly and as early as they can.

“I also believe selecting a good and clean seed source is important. We don’t tend to hold onto seed for more than one year to ensure quality,” he says.

Machine set up is important at Brook Park. Come seeding ample time is spent ensuring calibrations and seeding depth are correct. Andrew says seed depth is set for each crop type and is adjusted in the paddock as necessary.

“The key to good establishment is getting the basics right, don’t over complicate.

“In dry years we rely on seeding depth and chase moisture deep if we need to.”

Although their seeder bar is not a low soil disturbance system, Andrew believes minimal disturbance is an important element for improving establishment in drier times.

The Sargents have been able to maximise plant establishment through better seed placement with their current equipment by reducing hair pinning across sandy soils, which became a common issue in wet conditions during seeding. One benefit of the Flexi-Coil machine has been the ability to better incorporate pre-emergent herbicides at seeding time, allowing for better crop competition.

“Annual ryegrass and brome have been our two biggest weeds on farm. Since we have been using the knife point press wheel system, we have increased control through better incorporation of herbicides,” Andrew says.

“Pre-emergent herbicides such as Trifluralin and Tri-allate (Avadex Xtra) still work well and remain a good weed control tool within our program.”

The seeder bar has some limitations. The Sargents have had implement steer technology now for two years, however technology compatibility issues continue to interrupt their operations. “The machine doesn’t track very well without implement steer, so we are looking at ways to improve so we can better interrow sow.”

Andrew believes that singulation planters could potentially have a fit within their system, if they could be adapted to tyne technology. With the increasing costs of seed, like genetically modified canola, Andrew believes precision planter technology could have a greater fit to reduce input costs and also address the variability for germination and establishment of canola.