Yorke Peninsula agronomist Stefan Schmitt is the first to admit he faced a daunting task starting two new discussion groups for the GRDC Southern Pulse Extension project on the opposite side of the Spencer Gulf.

But with the support of his employers, Ag Consulting Co directors Bill and Jeanette Long, Stefan took on the challenge and learned a lot in the process about himself, farmers and farming on the Eyre Peninsula.

He started by talking to a few contacts in the Cleve and Lock districts, followed by “postal drops, a lot of emailing and cold calling”. Agronomists Marty Lovegrove, of Landmark Cleve, and Daniel ‘Gino’ Bowey, of Crop Smart at Lock, were a great help in establishing the groups as well as providing valuable specialist local agronomic knowledge.

“Eventually I was able to put a group together and I’ve had good attendance at all my pulse check meetings, even in the light of Cleve going through drought,” Stefan says. “So, it’s gone from daunting to being reasonably successful.”

Stefan recalls the first few meetings were intimidating, and attributes that to his lack of experience.

“(Later) we were fortunate to have Jeanette Long run some facilitation training through the project on behalf of Birchip Cropping Group,” he says. “That was invaluable. We learned about personality types and how to cater for them during a meeting to ensure that they stay engaged, as well as the process behind running a successful meeting.”

One of the most important things Stefan learned from Jeanette was to encourage people to speak up early on by asking each of them to share what they’d recently been doing on the farm.

“If you don’t get someone to talk in the first few minutes they might not talk for the rest of the meeting,” he says. “It’s critical to get a bit of discussion at the start of the meeting so it flowed. It also helps to give ownership to the group, asking them what they want to do and what direction they want to take.”

Now in his seventh year as an agronomist, Stefan became interested in working in agriculture at a young age. He grew up on the family farm near Port Broughton, on northern Yorke Peninsula, which is now run by his father David and brother Joseph.

Having completing degrees in Agricultural Science and Commerce at the University of Adelaide, Stefan is now based at Port Broughton and focused on gaining greater expertise in agronomy, research trial work and facilitation.

Stefan says pulses had made Yorke Peninsula farmers “a huge amount of money” during the boom years of the past decade, when lentils were priced at up to $1200/tonne two years in a row and chickpeas fetched up to $1400/t. The aim of establishing the groups at Cleve and Lock was to improve farmers’ knowledge and confidence in growing and experimenting with these highly profitable crops.

“When these discussion groups were starting, we were coming off the back of a big lentil price year so there was a lot of enthusiasm on the Eyre Peninsula to get into lentils,” he says. “Then as soon as it started, the prices dropped away to $500 to $600/t.”

Nonetheless, Stefan is confident future global demand for pulses, as an alternative protein to meat, will continue to increase and so will prices.

An added attraction for Eyre Peninsula pasture and vetch growers has been the release of three imidazolinone-tolerant lentil varieties: PBA Herald XT in 2011, PBA Hurricane XT in 2013 and PBA Hallmark XT in 2019.

“That’s really changed the landscape,” he says. “It gives growers confidence they can take those problem weeds out of lentils. Prior to that they would have had to use quite high rates of Group C herbicides upfront, which can be quite risky, particularly on fragile sands. This limited the uptake of lentils in a lot of these areas. Genetics have also improved a lot – they’re higher-yielding – and more people now have a flex front which makes it a lot easier to harvest lentils.”

“Shattering is a big risk with growing lentils in a low-rainfall zone, particularly if they don’t canopy up,” Stefan says. “In the last few seasons, Cleve has had some serious drought and growers have struggled to get a return from lentil crops.”

Stefan says the GRDC Southern Pulse Agronomy trial site at Tooligie Hill has been valuable over the past two years. “We’ve been able to have input into what treatments are put in at that site. Visiting it is always a highlight.”

Input from members has been integral to the success of the discussion groups. Both opted for afternoon meetings with paddock or trial site visits and guest speakers followed by a barbecue and social drinks, which Stefan says has been “really popular”. 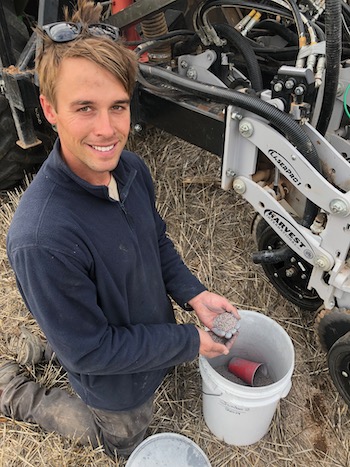 Also successful was a two-day bus tour around Yorke Peninsula that attracted 20 members from both groups in 2018. They visited trial sites to look at ways of reducing lentil damage from pre-emergent herbicides on sandy soils, and heard from long-time lentil grower Mark Schilling, at Kadina, about seed cleaning, delivery standards and marketing options.

As well as holding meetings on farms where possible, Stefan has taken care to ensure he caters for the different learning styles of individuals.

“I’d say 70 per cent of farmers across the groups are quite similar,” he says. “They’re hands on, they like doing the paddock tour, like to see, touch and feel things, and then there’s the other 30 per cent who are really into the fine detail of the stats and data. I try to incorporate both into meetings, so we have a lot of visuals. And for those that really want the nitty gritty details, there’s handouts or follow-up emails with further information, making sure we cover all those people who learn by looking and learn by listening.”

Despite two years of difficult growing conditions, Stefan is happy with the outcomes from the discussion groups, which include an increase in the acreage of pulses grown in the Lock area.

“The project’s provided a lot of really good information about diseases, pests, herbicides, marketing, everything,” he says. “It’s given farmers the confidence to have a go and grow them and be well-informed agronomically. I feel it’s worked quite well.”

Indeed, it has worked so well that Lock group members have taken steps to revive a local branch of the Agricultural Bureau of South Australia. The nearest branch, Murdinga, closed in 2002, but the growers are keen to ensure they can continue the discussion group concept after the GRDC project concludes.