For Andrew Bennett, good crop establishment is important because plant density leads to weed competition and maximum yields. Emerging plants are closely monitored by Andrew and his agronomist on a bi-weekly to weekly basis, with checks focused on insects, slugs, snails or problems incurred from seeding depth and seeding rates.

“It’s a lot easier to fix it early rather than letting it get up and finding a problem,” Andrew says.

Andrew chose his 2007 model Bourgault 8810, 9.14m seeder bar because it was set up the way he wanted it, with a double chute suitable for pastures through to beans. Fourteen years down the track he is still very happy with his purchase.

"I would buy the same one again,” Andrew says. He has made a few modifications along the way to assist with beans reaching the 50mm sowing depth and ensuring he has good seed and herbicide separation through the rows. The only downside for Andrew is the stubble flow around the wheels. 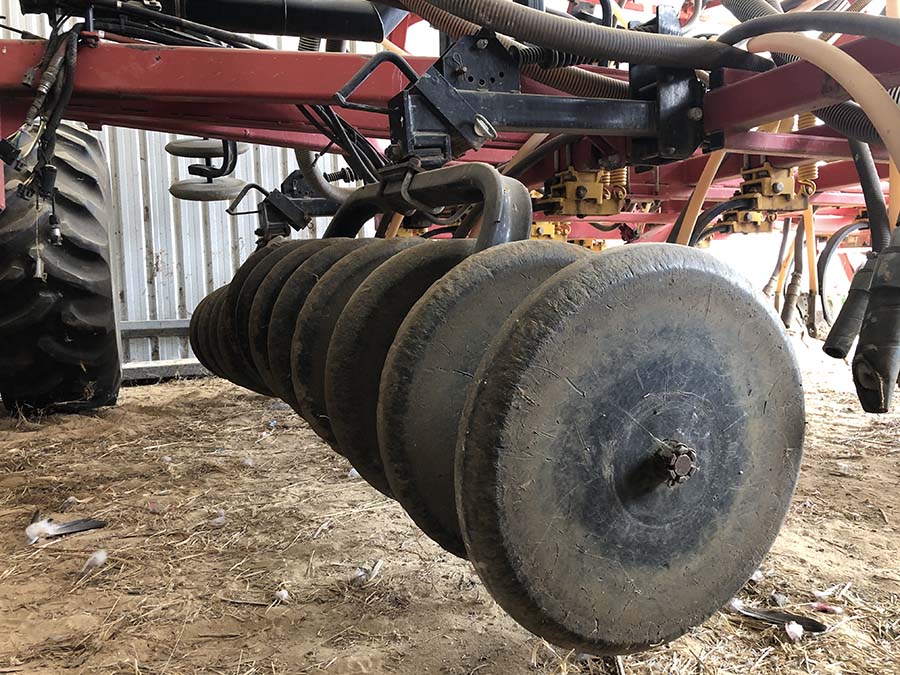 Andrew sows his canola on top of the ground and uses press wheels to give soil-to-seed contact. Image: Supplied

Andrew’s tow-behind 2007 Bourgault 5195 air-cart is fitted with three sealed bins with an auger metering system suitable for fine to large seeds. It has a double chute with a single line going out to the bar followed by four primary lines to 36 secondary heads with a 32 mm terminal. He has a Bougold 591 in-cab monitor with cameras in the tanks to monitor the seed level. The row-to-row distribution and metering accuracy is very good at low and high speed.

Andrew sows his canola on top of the ground and uses press wheels to give soil-to-seed contact. He seeds his cereals to a depth of 25 mm and beans at 50 mm. Seeding beans at this depth seems to work well on Andrew’s  sandy soils, but can be challenging on the heavier black clays. He says he  monitors the seeding depth at the start of every paddock and again when refilling the seeder.

Sowing time is also critical. Andrew plants his cereals in late April to early May, while canola and beans are planted in early May. He plants beans dry, which gives him the chance to knock down any weeds before the plant comes up. “The beans can sit there for three weeks before they germinate,” Andrew says.

Paddock selection and rotation is very important. Andrew tries to avoid burning stubbles but will do the odd narrow windrow burn of canola stubble to control ryegrass and snails. To reduce wheat stubble load, Andrew grazes cattle with a molasses blend to help with digestion and  lambs are fed on bean stubbles.

Over the past few years Andrew has been focusing on improving his soil health. He has sandy loam soils over clay, and in some areas the clay is up to 30m deep while in other areas, it is nearly at surface level. Andrew  has been deep ripping where possible and in the deeper sand, he has been delving and spreading clay to increase his soil fertility.

While this is a slow process, with 80 per cent of his sandy country completed, Andew says it has enabled him to double the production on his improved soil. It is a very expensive exercise costing around $400-$500 a hectare, however, without the underlaying clay this approach would not have been an option for Andrew.

Andrew says his  greatest challenge is early weed germination, so getting good coverage to choke out the weeds is essential. Seeding depth is very important to get right.

“If seeding depth is too deep the plant uses more energy to get out of the ground so therefore is slower to get growing,” he says.

The crop that presents the greatest challenge for Andrew is oats, due to chemical control options for ryegrass management. He also has issues with rhizoctonia but is getting around it with the use of more zinc.