Russell (centre) and his sons Nathan (left), Greg (right), Tim (not pictured) and brother Graeme (not pictured) chose their seeder setup due to ease of use and simple design which provides reliable functionality in their system.
Photo: Supplied

With a long-term goal of moisture conservation, the Dunlop brothers retain high cereal stubble loads using a stripper front on their header and run a Control Traffic System (CTF) system. Retaining waist high stubbles presents potential issues for a sowing program, however by using a disc seeder, they have found many of these issues can be avoided. Not only is diversification achieved through different crop types, but through the incorporation of livestock.

The Dunlop family view successful plant establishment as the even and healthy emergence of plants, which they see as critical for achieving good yields and early crop competition.

The seeder set-up purchased by the Dunlops two years ago was chosen for a number of reasons including the simple design, location of the dealership and access to support, compatibility of non-brand parts, price and demonstration by others that it works well in local soil types and conditions.

“With only one grease point per disc, maintenance of the seeder is not time consuming,” Russell says.

With air cart selection, the decision again was driven by the easy to use and simple design which provides reliable functionality in their system.

“The manual crank calibration is easy to use and sensitive enough for our sowing rates, however larger seeds such as beans can vary in the metering, likely due to uneven fall of seed into sections of the roller,” Russell says.

His son Greg said while the family’s 15-year-old air cart did not have variable rate capability, this was not a function they would use at sowing.

“We are more likely to employ variable rate at in season application of fertiliser,” Greg says. “If upgrading in the future liquid fertiliser capability would be considered desirable.”

A list created throughout sowing in the previous season guides maintenance and improvements to be made to the seeder prior to sowing. While maintenance is unlikely to be time consuming, seeder setup is constantly monitored throughout the sowing operation to achieve good, even seed placement and depth control.

"We sow by the calendar, dependant on rainfall, with a goal to have all crops, except for chickpeas in by mid-May. Canola will take preference prior to a rain front as we value the ability to get it up early and be competitive,” Nathan says.

Sowing rates are set by a kilogram per hectare target, adjusted by feel for variation in seed size across varieties and seasons. High quality, treated seed with fast vigour is an important first step towards achieving good establishment for the Dunlops. When sowing, consistent and even depth are achieved through setup and monitoring. This is adjusted paddock-to-paddock and between crop types. Typical seeding depths are around 2 cm for cereals, slightly shallower for canola and 4 cm for lentils.

“For beans, we are currently achieving a depth of around 5 cm but this is the limit to which we can get to with the current bar otherwise deeper would be targeted,” Russell says.

The disc system allows for good moisture retention at sowing and fast sowing speeds in dry conditions (up to 12 km/hr). One factor that does need to be considered more carefully with a disc seeder is herbicide application at sowing. The addition of Aricks wheels on the seeder bar allows for movement of the top layer of soil away from the seed. Lentils are considered the most susceptible crop to spray damage for the Dunlops in their system, something they are careful to monitor and manage.

“When transitioning from a tyne to a disc system, some herbicides such as trifluralin no longer have a fit, however, the current herbicide options, heavy stubble cover and good early vigour have been sufficient at keeping weed populations under control,” Greg says. “In some situations, where a knockdown can be achieved prior to sowing, no herbicides are applied in front of the seeder.”

Another important factor for the Dunlops is fertiliser rates at sowing. Aiming for vigorous early growth, starter fertiliser is put out at sowing at a rate of 60 to70 kg/ha of Granulock Z for cereals and 30 to 40 kg/ha for legumes.

The family work on 60kg/ha of Granulock Z applied to canola at sowing, plus Sulphate of Ammonia (SOA) applied in season.

The major challenge for the Dunlop’s sowing operation comes from the predominant soil type on their property which is heavy cracking clay. When dry, the soil is friable and sown into using the disc with ease. Issues arise when the soil is moist as it becomes very sticky.

“Build-up of soil on Aricks wheels, discs and gauge wheels can cause setbacks in sowing causing discs to stop spinning, stubble blockages and uneven seed placement,” Nathan says. “Understanding the soil type and time required for soil to dry out prior to getting going again after a rain helps us avoid this issue.”

When the conditions are marginal, and soils are sticking, the Dunlops can raise or remove Aricks wheels and press wheels. 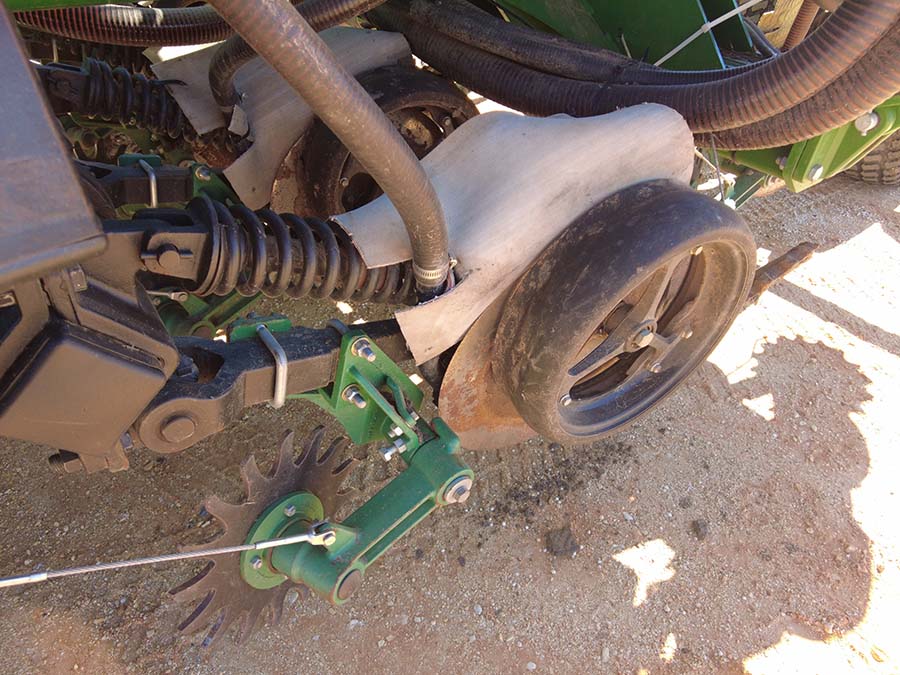 The covering between the disc and gauge wheel. Image: Supplied.

“We have also added covering between the disc and gauge wheel to avoid build-up of soils using an offcut of a shifter belt and cable-ties to achieve the desired result, a method used by a neighbour with a similar issue,” Greg says. The Dunlops are looking to trial new gauge wheels that are self-cleaning.

“Despite these steps, in wet conditions, a fair amount of time can be spent scraping sticky soil off parts so this is something we are willing to invest the time into doing as we feel when conditions are good, the speed of sowing makes up for the setback,” Nathan says.

Russell explained in the first year the family found themselves looking over the fence and seeing neighbours, who used tynes, out sowing a day or two after rain and they felt pressured to get onto paddocks.

“We now know that the speed of the disc system means that we are able to let the ground dry-out that little bit longer to avoid the mud build-up and not miss our sowing window,” Russell says.

High stubble loads can cause some trash flow issues and provide a good environment for pests such as mice and snails.

“We spread mouse bait behind the seeder via the small seed box for all crop types except canola, where we spread the bait after sowing If snails are an issue, we’ll bait them,” Russell says. Although aware that burning would be the most effective method of snail control, this is something the Dunlop’s try to avoid.

“It doesn’t align with our long-term goal of stubble retention,” Russell says. “When it comes to insect pests, seed is treated and application of broad-spectrum insecticides are avoided if possible.”

When it comes to managing trash flow, the Dunlops have had issues of stubble hairpinningand blockages occurring when the stubble is not standing. To address this issue, the Dunlops have selected varieties with more erect growth habit in cereals. To retain the standing stubble, livestock are managed so they do not graze cereal stubbles and knock them down.

“We’re not game to put the sheep on the cereal stubbles for fear of knocking them down and making it hard to sow and it goes against our long-term goal of moisture conservation,” Greg says.

When sowing, the seeder is nudged across to achieve interrow accuracy. The option of raising or removing Aricks wheels and adjusting gauge wheels allows for tweaking to conditions and sowing speed may be lowered.