Workshops bring sunflowers back into the light

Workshops bring sunflowers back into the light

From soil conditioning to weed control, sunflowers can bring agronomic benefits, although end markets have become harder to find in the past five years with the closure of Australian oil processors. Consequently, production has dropped dramatically.

That said, Australian Sunflower Association (ASA) chairman Kevin Charlesworth says alternatives, such as animal feed markets, are lucrative. Prices range from $800 to $1200 a tonne. “There is money to be made but, like all crops, all the usual things need to be in place – good agronomy, storage and buyers.”

Mr Charlesworth spoke at two recent workshops on sunflowers. Presented by GRDC and the ASA and organised by PulseAg Consulting’s Kerry McKenzie, the workshops outlined the latest information on plant growth and development, agronomy, pests, weeds and disease, harvesting, storage and marketing.

Presenter Tony Lockrey, an AMPS consulting agronomist based in Moree, outlined some of the benefits from growing sunflowers, which include early planting options as well as weed and disease breaks.

Sunflowers can be planted a month earlier than sorghum and are a quicker crop. “You can be done and dusted by January. This means you can accumulate soil moisture before a winter double crop.”

As an example, he says, a crop sequence of sunflowers double-cropped to wheat works well. “In terms of weed control, sunflowers have options for in-crop grass weed control. However, control options for broadleaf weeds are limited unless you are using imidazolinone-tolerant sunflower. Also, sunflowers can provide a break from crown rot and nematodes.”

Despite outlining reasons to grow them, he says there are also good reasons not to. This can include having heavily treed areas. “Cockatoos love them and can wreak havoc on a crop. Bird damage is extremely visual and we don’t have a good handle on the actual amount of damage caused. We also don’t have useful control options.” 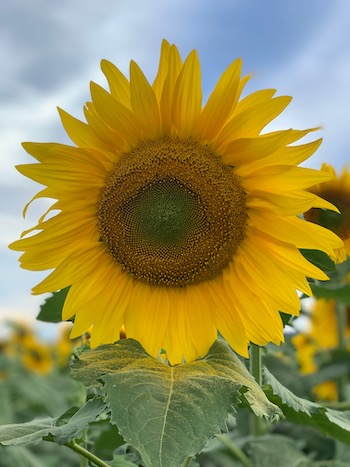 Paddock history also needs to be considered. “If the paddock has a broadleaf weed history, it might be best not to grow standard sunflowers because good broadleaf herbicides cannot be used with them.”

However, this has recently changed with the introduction of imidazolinone-tolerant varieties.The first locally available variety, Ausiclear®20, was released this past season.

The variety was bred by Barenbrug Australia northern breeding manager Chris Haire, who is based in Toowoomba.

Mr Haire says the imidazolinone-tolerant sunflower variety is an important breakthrough. “Controlling broadleaf weeds in sunflowers has been a challenge for growers for many years.

“Growers have always had some grass control options, but there’s really been no control methods for broadleaf weeds, so they have had to use crop rotations and just plant into paddocks without broadleaf weed pressure.

“Ausiclear®20 now gives an opportunity to spray and control some of those difficult broadleaf weeds using the imidazolinone group of herbicides, specifically Intervix® from BASF. This is a broad-spectrum broadleaf and grass control herbicide that previously couldn’t be used in sunflowers.”

As with all residual herbicides, the level of residue will be dependent upon length of time since application, rate and environmental conditions, he says. Also, as an earlier-maturing hybrid, Ausiclear®20 has a lower moisture requirement and can be grown in more marginal areas as an opportunity crop.

Loretta Serafin, a summer grains research agronomist at the NSW Department of Primary Industries who also presented at the workshops, says the new variety is positive news. “For a minor crop, this investment is big news. It reinforces that there are good summer options, like sunflowers, out there.”

Sunflower grower Mick Hockey, who farms 3400 hectares at Spring Ridge, north-easter NSW, attended one of the workshops. Mr Hockey has grown sunflowers for several years but was keen to hear about additional marketing options.

“The main reason we keep them in the rotation is price. It always comes back to markets and price. With sunflowers, you have to have your market lined up at a price that suits.”

Mr Hockey grows the hybrid SuperSun 66, after a long fallow following wheat or barley. He then plants wheat again to get some cover back. He typically supplies Paradise Farms at Gunnedah. However, this year, after planting 160ha, the kernel processor does not need his supply so he will store them on-farm, confident of finding a buyer. “Sunflowers are a good soil conditioner, but we do need additional markets.”

For Gunnedah grain grower Duncan Hill, sunflower price fluctuations – from $500/t to $1500/t – can cause headaches. However, he tends to plant a minimum of 200ha annually across his farm in September.

He finds sunflowers cope well with high levels of chloride in the soils across the 1200ha property. Last year, he planted the new variety Ausiclear®20 and found the broadleaf weed control, especially against bladder ketmia and barnyard grass, valuable. “I would have grown non-imidazolinone-tolerant sunflowers if there wasn’t a choice. However, I think these varieties are great because residual chemicals are going to increasingly become the way we control broadleaf weeds.”

Ms Serafin says the workshops helped remind growers and agronomists about the basics. “Some younger agronomists have not had any experience with sunflowers. So, providing a one-stop shop for agronomists and growers, covering everything from disease to weeds to insects to agronomy to establishing future contacts, is vital.”

Mr Charlesworth agrees, saying the workshops helped ensure important agronomic knowledge and new research is shared. “We want to keep the flag flying, so to speak. Because of diminished production, we could start to see sunflower knowledge lost,” he says.

“As an association, we are worried that if prices rise, growers will rush to plant sunflowers without knowledge and in-crop support. We don’t want them to then have a bad experience and never grow sunflowers again. These workshops are about ensuring that doesn’t happen.”

Since the training, Tony Lockrey says there has been an increase in sunflower inquiries and more fields earmarked for spring sunflowers around Moree.