Jim Heal and Red the kelpie inspect the canola crop that had grown to an impressive height by August.
Photo: Courtesy of Jim Heal

Each year, GroundCover™ follows a group of growers from across Australia as they manage the cropping season. As spring arrives, they tell Melissa Marino how they have navigated through wet and overcast conditions.

Some paddocks got too wet with 160 millimetres in July alone. We needed a plane to spray fungicide and insecticide over about 600 hectares of wheat that we couldn’t get on to. Planes were very busy with mouse control in the district as well.

When the canopy stays wet, applying fungicide is crucial to prevent disease building up ahead of the warmer days. We got across most of our country with the boomspray, hitting canola to prevent blackleg and Sclerotinia and it looks pretty healthy.

We have spread another truckload of potash over our sandy areas. Tissue tests showed some canola was deficient in potassium even though we spread 75 kilograms/ha of potash in March.

Canola was six feet high by August so it will be interesting come harvest – she’ll be pretty slow. All crops are promising – probably the best I’ve ever seen at this time of year. And there’s no disease pressure in cereals. Pastures are ticking over well, so 230ha of barley we planted for sheep feed will end up as a cash crop instead. It can pay for the plane – and the mouse bait.

We had mice where our mother bins were parked from last year’s harvest, so we spread bait around those areas and will keep monitoring.

Wild pigs are coming in quite big numbers from the natural habitat that surrounds our farm, so we’ve been busy baiting. They’ve been chewing our lupins quite happily, making a bit of a mess.

Off-farm our new grower group 3FIN (Three Springs Farm Innovators Network) met for the first time. I’m on the committee. We’ve done a three-year strategic plan and are getting it incorporated. It’s a great way to get the community together.

Everyone’s cautiously optimistic. If we can get through September with no frost or excessive heat it will be a very busy harvest – and a long one.

We’ve had plenty of rain. With 250mm at KI in June/July it got too wet for cropping. A lot of country was waterlogged. Canola really suffered. Late June we resowed 200ha that had got too wet and eaten by slugs, but by August that was under water too. Crops sat in water for a few weeks and some died.

It was quite challenging to do any spraying or nutrition. If it wasn’t raining, it was too windy to fly. We just couldn’t get the plane in the air. We’ll probably lose about 10 per cent of the farm.

But it’s never ideal at both farms and at Paskeville everything looks a million dollars. Things really turned around after a dry start. Rainfall (150mm in June/July) was perfect. We got our chemical out on time and applied extra fertiliser – 40 litres/ha of liquid nitrogen with a boomspray. Through September we’ll apply more nitrogen and trace elements if the crops need it – if it keeps raining.

It’s good insurance to know no matter the weather you will have some good crops, especially when grain prices are high. With Canada in drought the canola and lentil prices are fantastic. And lentils got an extra boost with India removing the tariff. If we get decent spring rain we’ll have a good crop and good prices, which is very rare.

This year has been pretty hectic. We bought a Queensland property and my brother and his family moved there, growing sugarcane, mungbeans and soybean under irrigation. It’s a steep learning curve but they’re loving it.

It’s meant I’ve been doing a lot of driving between KI and Paskeville. I got stuck on the island a couple of times because it was too rough for the ferry. It comes with a lot of challenges going back and forth but it’s good.

Stuart McDonald and Ellen Downes run a mixed-farming enterprise at Canowindra in central-western NSW. They grow wheat, canola, chickpeas and barley and are moving to a more diverse system with lupins, oats and multi-species forage crops. They have self-replacing Merino ewes and a small herd of studIllawarra dairy cows, which are Ellen’s family heritage from Jamberoo.

It was a cold, bleak winter with frosts and only a few sunny days. We’re still very hesitant to say ‘bloody rain, go away’ but it has left us with very narrow windows to access the paddocks.

We got to most of the canola with a grass spray, but we couldn’t get the wheels over the ground for cereals until August, spraying for grass and broadleaf weeds. Urea went out as soon as possible in August – hopefully in time to achieve a yield lift.

I had great ambition to tailor our nitrogen program around soil testing and zoning, but they got bogged three times attempting deep-nitrogen testing. I had to pull them out with a tractor. I thought we’d come back when it stopped raining, but it didn’t stop.

So we’ve gone from trying to be precise to getting on what we can, when we can. Everything is hungry for urea (up to 400kg/ha) so we’ve thrown whatever we can at it. It’s become very simplistic, but that’s the nature of the conditions.

We’ll apply fungicide across canola at 30 to 40 per cent flowering in September. One spray on canola is almost mandatory in our system and chickpeas will also get a treatment.

Water was flowing across the chickpeas and we lost some to inundation, but most have held up. The wheat also looked surprisingly green, despite sitting in water. It’s got potential.

Crop growth has been really slow. Late-sown wheat (LRPB Mustang ) struggled to get through the heavy stubble. Frosts and the wet really impeded it, but it’s also a function of moving to a disc system. We were so focused on getting the crop in, we didn’t think enough about it coming out of the ground.

In future, we’ll plant earlier and have more nutrition out early because stubble takes nitrogen away from the crop initially. They’re all little factors that, when put together, have contributed to our problems. But it’s a learning curve and we’re adapting our system for the long term, so they can be locked away and learnt from in the future.

We had a fairly wet July – about 200mm, which is not too unusual, but 24 days were rainy with some extremely heavy falls. The paddocks were very wet and hard to get on. We have a reasonable amount of hill, so I can potentially get bogged and make a mess sliding across the paddock.

Because we grow potatoes we can’t get away with a no-till cropping program. It would have been nice to have had the potatoes harvested a bit earlier and the wheat established to hold the soil.

The wheat is coming along okay but we lost about 10 per cent to erosion and it didn’t like sitting in the wet. It looked a bit yellowish. Slugs were around, but bait got them under control.

We managed the first herbicide and nitrogen application over some drier days early August. We’ll do a preventive fungicide in October when the crop should be hitting its straps.

We’ll continue planting onions in any fine gaps through September. The market is very weak so we’re cutting them back, leaving a paddock in pasture for beef cattle. We’ll sow poppies from mid-September.

We have plenty of options here on the coast, so we change things around if the market isn’t suitable. Our grower group took a factory tour of Simplot where our potatoes are processed. It’s great to see what they do with our product, and you get a good understanding of their quality requirements.

The weather has been odd to say the least. In early August we had a 32°C day, frost the next morning, then rain.

It was dry in late July, which allowed us to catch up on in-crop sprays for broadleaf weeds, grasses and black oats in wheat and chickpeas. We were behind because if it wasn’t raining, it was blowing an absolute gale.

Everything was consistently wet on top for a period. It was inconvenient in that we couldn’t really get anything done, but it set us up for a decent season.

We are building contour banks, but they don’t like wet weather. We bogged the D11 (bulldozer) and spent a day digging it out. That was a nightmare. We try to do a few hundred hectares every year to prevent waterlogging and erosion and get better use of rainfall.

But I’ve got no complaints. Everything got prophylactic fungicide early so we’re pretty confident that won’t be an issue. We’ll keep an eye on legumes for grubs and disease.

The crops took off with some warm weather. We’re gearing up for harvest to start late September with faba beans, clearing our sheds and silos and making sure everything is weevil-free.

A few mice were getting around so we baited before they got out of control as crops came into head early August. We have such a large area that the cost of a plane to do it once is about the same as buying a spreader. So we did it ourselves and it will pay for itself inside one season.

It’s looking good as long as late frosts stay away. It’s an old wives’ tale that you can prevent frost if a lot of smoke is in the air the night before, so we set excess grass on fire. I’m not sure if it actually achieves anything but it makes you feel better for trying. And it reduces our summer bushfire risk. 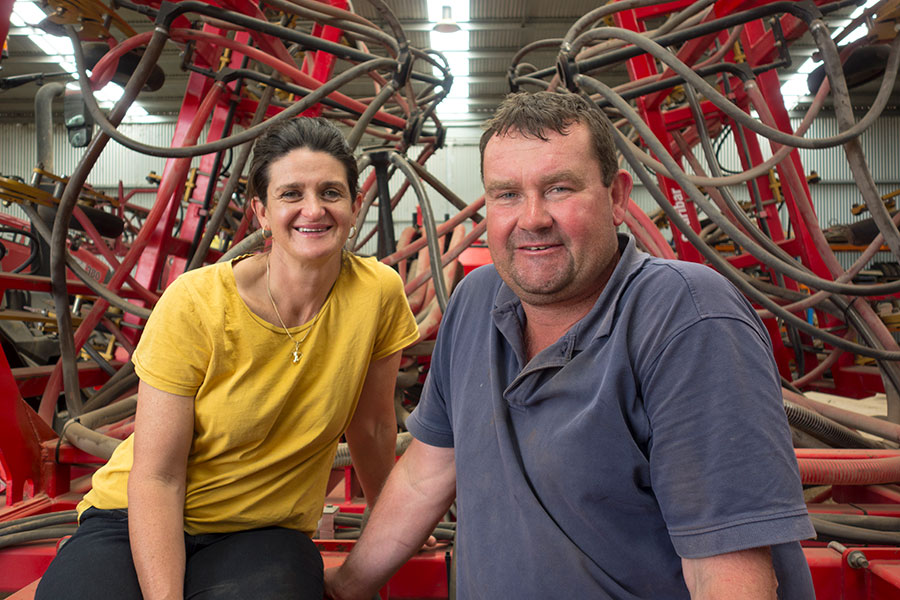 It was a case of ‘get out your gumboots’ – it has been very wet. June was decile 8 (for rainfall) and July decile 9. The soil profile was absolutely full to capacity after a wet summer.

Our beds worked very well removing excess water, but crops were still waterlogged. By early August, cereals were taking a turn for the worse and starting to yellow – anaerobic conditions were taking their toll.

We needed to get urea out and booked a plane in August, but we had to wait for conditions to dry out a little. We didn’t want to apply urea with water sitting in the paddocks as it results in significant nitrogen losses.

Using a plane is normal for us because we usually get pretty wet. We minimise ground applications through winter if necessary to prevent compaction, getting bogged and making a mess.

Our crops were set up well with good root development and establishment, so we will do what we can for them.

We applied fungicide to canola, barley and red and white wheat. Some cereals received a growth regulator. Beans (PBA Amberley ) had two fungicide applications but will have more if disease warrants.

The beans are a good colour and, along with canola, look the best of everything. They seem to be handling disease so far.

In September we hope to be sowing spring barley into weedier paddocks. This provides a couple of good knockdowns. Given the rain, we won’t run out of moisture, but it will help dry the soil profile. Last year we sowed barley as late as Melbourne Cup day. The crop returned 5t/ha, so we’re not worried about doing it.