Turnip weed, here flowering in wheat, produced 32,000 seeds a square metre in research trials. Work also found all of its seeds are retained, suggesting that HWSC practices are likely to reduce its seed bank in the soil.
Photo: Professor Bhagirath Chauhan

Weed seedbank persistence can be less than 12 months for some species and more than 42 months for others, and some weed species can still be holding more than half of their seeds at crop maturity.

This new information on weed biology, presented at GRDC Updates by Professor Bhagirath Chauhan, may provide new insights into how weeds are controlled and managed in the northern region.

Professor Chauhan leads weed biology and weed management research for the Queensland Alliance for Agriculture and Food Innovation (QAAFI) at the University of Queensland. He said weeds cause an annual revenue loss of up to $140 million in the northern region.

Integrated weed management (IWM) programs are considered vital to reducing those losses, but to be effective and sustainable these programs also need improved understanding of weed biology – data often not available for emerging weed species in the northern region.

“For example, knowledge of weed seedbank persistence is critical for the development of IWM tactics for herbicide-resistant or difficult-to-control weeds,” Professor Chauhan said.

“Similarly, information on weed seed retention at crop harvest may be used to create the opportunity to use harvest weed seed control (HWSC) tactics and prevent the build-up of weed seedbanks.” The GRDC-supported ‘Emerging weeds’ project led by The University of Adelaide, aimed to address that and saw the biology and ecology of nine weeds studied in the QAAFI-led component.

Feathertop Rhodes grass a major weed in the northern region and Professor Chauhan showed it produced almost 150,000 seeds per square metre in mungbean crops. However, its seeds persisted only for a year on the soil surface and 1.5 years in the soil.

“These results suggest that prevention of seed set can rapidly deplete seedbanks of feathertop Rhodes grass and similar weed species. The most effective management is to prevent seed set and drive down the existing seedbank through intensive management.”

The work showed that common sowthistle and Mexican poppy took 18 months for 100 per cent seed depletion on the soil surface. Seed survival increased for both species following seed burial but, their respective persistence varied with sowthistle surviving for 24 months and Mexican poppy for more than 42 months

Surface seeds of bladder ketmia and sesbania pea, both hard-seeded species, were still viable on the soil surface and buried seed at 42 plus months. “This suggests that these seeds will keep germinating in no-till farming systems beyond three years of their shedding.”

Buried seeds of all weed species persisted longer than surface seeds. This is not a surprising result, he said, as buried seeds have reduced risks from seed predators and reduced exposure to fatal-germination factors such as high fluctuations in temperature and surface moisture conditions.

Turnip weed flowering in chickpea. The image is taken with a drone. Photo: Professor Bhagirath Chauhan

Assessed in wheat, common sowthistle produced up to 193,000 seeds a square metre, but 95 per cent of these seeds had dispersed by harvest.

In contrast, 100 per cent of seeds were retained for turnip weed, which produced 32,000 seeds a square metre. “These results suggest that turnip weed exhibits high seed retention at wheat harvest and employing HWSC practices are likely to reduce its seedbank in the soil.”

Professor Chauhan also noted that in a poorly established crop in the northern region, turnip weed grows more than 4 to 5cm in stem diameter. “This may impede harvest and HWSC suitability. In such situations, seed sterilising practices such as crop-topping and desiccation may need to be used in the leadup to harvest.”

For common sowthistle, seed-capturing practices may not have desired results in wheat because the weed matured much earlier than wheat and most seeds had dispersed before harvest. “These results suggest that a higher level of seeds of this weed species could be captured in a shorter-duration crop or variety. Strategies delaying the emergence of common sowthistle in crops such as the use of pre-emergent herbicides could see the capture of more seeds from late-emerging weed seedlings by HWSC.”

Mexican poppy growth was severely affected by competition from the 18cm row wheat crop. “These weed plants reduced wheat yield by 20 per cent but did not produce a single seed, suggesting the weed-suppressive benefits of narrow-row planted crops. However, growers have observed Mexican poppy seed production in wider-row winter cereals, chickpeas and winter fallow fields.” 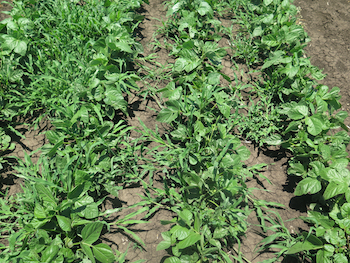 Although button grass and feathertop Rhodes grass produced more than 100,000 seeds a square metre, seed retention of at least 60 per cent suggests potential opportunities for HWSC, Professor Chauhan said. “Similar results may not be possible in a longer-duration summer crop, like sorghum. Where in a previous study, only 60 per cent of feathertop Rhodes grass seeds were retained at sorghum crop harvest.”

High seed retention and differential maturity periods between crops and weeds provide an opportunity for controlling weed species through HSWC practices. Crop-topping and desiccants may also be possible options in some crops.

In ongoing research on weed phenology, Professor Chauhan is looking at a range of summer weeds and their emergence at different times in the year, such as October, December or February. He will also study the influence that a cropped or fallowed paddock has. Crop competition can have significant effects on the growth habits and heights of weeds at crop maturity, changes that can greatly affect weed seed production potential and efficacy of HWSC practices.