When Graeme Wright started work at the Joh Bjelke-Petersen Research Station in Kingaroy in 1986, peanuts were a bit of an ‘orphan’ crop. “They were so under-researched and not sure where they belonged,” Dr Wright recalls.

Dr Wright is looking back at peanut breeding and his time as Australia’s top breeder as the GRDC-supported peanut breeding program undergoes a period of transition and he slowly exits his role.

“After 30 years of GRDC investment, the breeding program is entering a new phase. The goal has always been to bring this orphan crop in line with other crops. We’ve done that, steadily introducing the best breeding technology to peanuts. It has taken a career to do it and see the benefits. Now I’m helping with the next transition.”

For former employee Brondwen MacLean, much of her time at GRDC was spent working closely with Dr Wright on peanut breeding projects. She credits his academic and interpersonal skills with getting peanut breeding to where it is now.

“Graeme was able to take the best technologies being used in other crops and apply them to peanuts, leading to many breeding highlights. He was able to think broadly and modernise the program.”

Together they worked to combine the breeding efforts of the then separate and competitive PCA and DAF to create one collaborative breeding program.

Through it all, Ms MacLean says Dr Wright was also able to see broad opportunities. “For example, before anyone was even thinking about high oleic oil and its health benefits, Graeme saw a good breeding and then marketing angle for peanuts.”

High oleic peanuts, which have increased shelf life and healthier oils and moved Australian peanuts away from being a commodity product, were made possible because of rapid screening tools. Initial screening was via chemical assays, then near-infrared (NIR) spectroscopy and later single-nucleotide polymorphism (SNP) and molecular markers, which helped identify specific genetics. Dr Graeme Wright enjoyed getting to field days. This one, at Alloway near Bundaberg, was showcasing new high-oleic, disease-resistant peanuts. Photo: Graeme Wright

Dr Wright says molecular marker use has been a highlight. “Being able to tap into that, through collaborations with United States and Indian counterparts, has been important. We rode on their coat-tails to get new markers for leaf spot, leaf rust and high oleic oil. But importantly, we helped develop some important markers for them too – for blanchability and net blotch. We also added value in a truly collaborative research effort.”

Dr Wright says working with overseas collaborators, including the International Crops Research Institute for the Semi-Arid Tropics (ICRISAT) and the Indian Council of Agricultural Research, was rewarding.

“In the 1990s, we introduced peanut germplasm from India via a collaborative research project with the Australian Centre for International Agricultural Research.

“Some of the early maturing, drought-resistant material we accessed was a bit wild and woolly and it took time to tame, but we did and some of these lines are now really competitive with good quality, like the high oleics, disease resistance and large kernels.”

Perhaps one of Dr Wright’s fondest memories is working with students. These include Bega’s Daniel O’Connor and Shona Wood, plus his “star student” – the University of New England’s (UNE) Professor Andrew Robson.

Dr Wright “wooed” the young rice physiology researcher with talk of “the wonders and excitement of doing a PhD in Kingaroy on remote sensing in peanuts”, Professor Robson recalls. 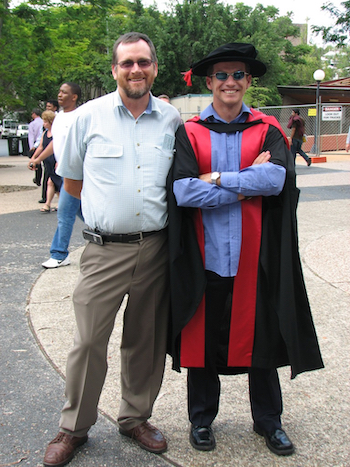 Dr Graeme Wright at the graduation of one of his star students, Professor Andrew Robson from the University of New England. Some of Dr Wright’s fondest memories have been working with students. Photo: supplied by Andrew Robson

“The most memorable moments were when Graeme and I were squashed in the back of a Cessna with a Sony camcorder hanging out of the window, imaging crops – ‘prehistoric drones’ in action,” Professor Robson says.

“Graeme’s retirement, while very much deserved, is a major loss to Australian agriculture and is another example of our discipline losing a champion researcher with experience, industry engagement and true grit.”

Dr Wright says he has been very lucky to have forged a career when he did. “I’ve been fortunate to live in an era where long-term careers were valued.”

He says GRDC has been instrumental in the continuity of his role. “I’d like to acknowledge that. GRDC kept the program alive and made a big commitment to variety improvement. Despite being a small crop, they understood its value in a larger farming system context. Growers have also been supportive.”

As he helps the breeding team transition, he looks forward to spending more time with his family and in the Bunya Mountains near Kingaroy.