Rodney Trethowan is hosting trials run with GRDC and NSW Department of Primary Industries investment on his farm near Rand, in southern NSW.
Photo: Nicole Baxter

Hosting independent crop trials has allowed Rodney Trethowan to identify which wheat varieties and remediation strategies offer the best hope to boost profits on the alkaline-sodic subsoils at his grain farm near Rand in southern New South Wales.

During the past five years, Rodney and his wife Sue have watched with interest as trials with GRDC and NSW Department of Primary Industries investment have screened wheat germplasm in search of the genetics best able to tolerate the hostile alkaline-sodic subsoils on their farm.

Rodney became involved in the national multi-agency trial through his Wagga Wagga-based agronomist Peter McInerney, of 3D-Ag, and NSW DPI soil scientist Dr Ehsan Tavakkoli when they were looking for a suitable site with an alkaline-sodic layer in the subsoil.

At the time, Dr Tavakkoli was overseeing the NSW component of a national project (UA00159) led by Associate Professor Glenn McDonald with support from Dr Rhiannon Schilling, both from the University of Adelaide, and other researchers from across Australia. The project comprises trials on 12 sodic and non-sodic soils in Western Australia, South Australia, Victoria, NSW and Queensland.

Dr Tavakkoli considered Rodney and Sue's farm ideal for the NSW trial because it has subsoils with exchangeable sodium (ESP) of more than 15 per cent at depth. In Australia, soils with ESPs of more than six are considered sodic.

The aim was to screen 52 bread and durum wheat varieties, advanced breeding lines and landraces to determine which, if any, would better tolerate the difficult, dispersive and hostile growing conditions, where roots cannot penetrate, yet plenty of water can be found. 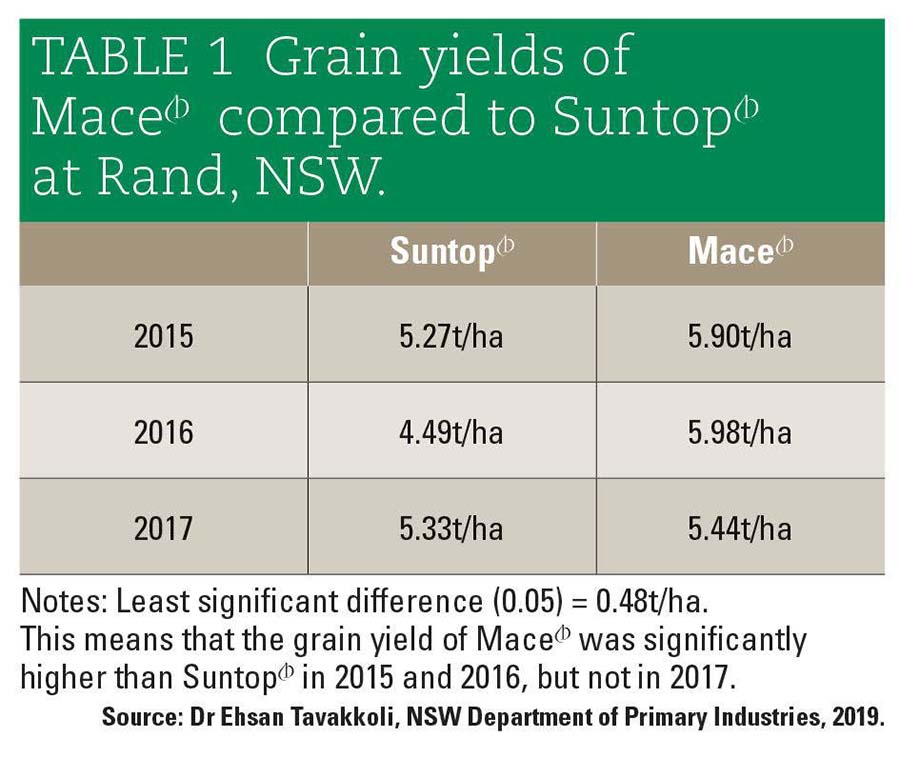 Mace was superior to all other commercial wheat varieties screened in trials on hostile soils on the Trethowan farm after the first two years.

After the first two years, Rodney learned Mace was superior to all other commercial wheat varieties screened on his farm, including Suntop (see Table 1), which, at the time, comprised the bulk of his wheat plantings. In 2017, Rodney started growing Mace and achieved superior grain yield results for the variety on his low-lying alkaline-sodic subsoils.

Rodney has since replaced Mace with Scepter because it shares many of Mace's properties and offers a yield advantage.

Another GRDC-NSW DPI co-investment (DAV00149) showing potentially "game-changing" results on Rodney and Sue's farm is exploring the changes in soil properties and grain yields after deep placement of organic and inorganic soil amendments.

After two consecutive seasons, Dr Tavakkoli has demonstrated that a number of treatments, including deep placement of organic amendments alone or combined with gypsum and additional nutrients, can significantly increase both barley and wheat yields.

While these amendments offer hope for lifting grain yields on low-lying alkaline-sodic subsoils, Rodney is also working with his agronomist Peter McInerney and precision agriculture specialist Jon Medway, from Terrabyte Services, to determine the most profit-limiting constraints across the farm.

The trio is using geospatial biomass imagery, statistical analysis and ground truthing with one-metre soil tests and landscape analysis to map the key profit constraints on a site-specific basis and develop a plan for their remediation.

Peter says low-lying parts of the farm with rock-free alkaline-sodic subsoils may be treated with pea hay pellets, gypsum and added nutrients, while soils higher in the landscape may simply need lime.

"There's no doubt combining pea hay pellets with nutrients such as phosphorus and ameliorants like gypsum will lift yields on some of Rodney and Sue's soils," Peter says.

"But other soils will require different tools."

Peter says safflower will be trialled as a 'bio-cultivation' tool to add organic matter into the subsoils of the upper slopes where rocks prevent the use of deep tillage.

"Safflower has a strong root system that penetrates compacted alkaline-sodic soil to a depth of more than one metre," Peter says. 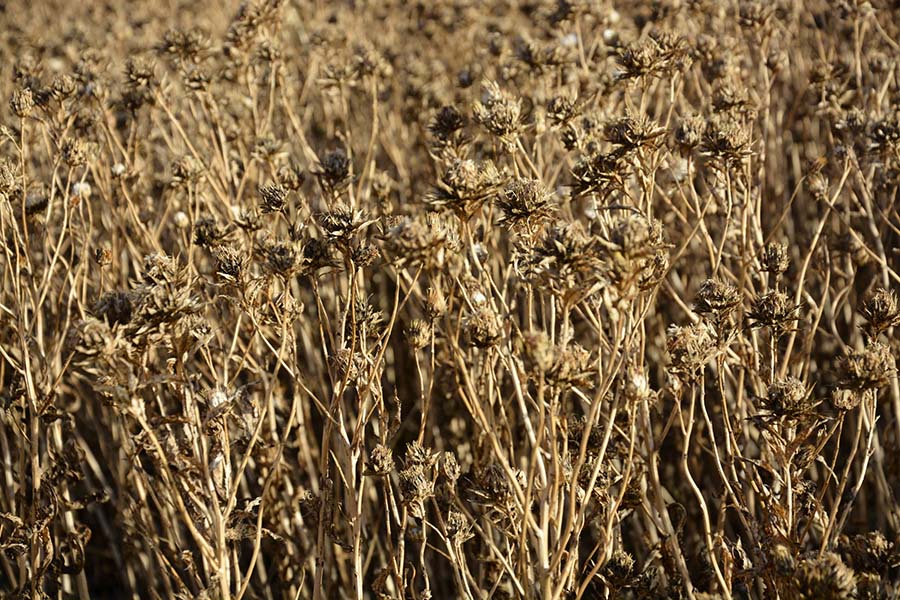 The Trethowans will trial safflower in 2020 as a 'bio-cultivation' tool. Photo: Alistair Lawson

"In 2001 we used safflower at Oaklands for bio-cultivation, but back then it was a difficult niche market."

Peter says super high oleic safflower developed by GRDC and CSIRO as an alternative and high-value cash crop will have broader appeal.

As a consequence, Rodney and Sue will plant super high oleic safflower in 2020 to explore its agronomic and cash crop benefits.

"On upper slopes with rocky subsoils, a small trial of super high oleic safflower is earmarked for comparison to canola as a means of adding organic matter to the subsoil through its hardy root system," he says.

"Then, barley would be planted in 2021 to determine how successfully its roots explore the subsoil via the channels left by the decaying safflower roots."

Renovating the soil with safflower effectively costs nothing, Peter says, except for the knowledge needed to manage and market the crop.

"It also allows Rodney and Sue to better manage annual ryegrass and reduce their frost risk, because safflower doesn't have to be planted until late May to early June and flowers outside the main frost risk period," he says.

Rodney says barley will follow safflower because its profits have eclipsed those of wheat during the past 10 years, seemingly because barley is more tolerant of alkaline-sodic subsoils than wheat.

Although Rodney, Sue and Peter are cautiously optimistic about subsoil manuring for parts of the farm, all three have their eyes on Dr Tavakkoli's trial to see if the yield benefits continue for the next three years.