Modifying headers to include air assist, as shown in this image, can reduce chickpea harvest losses by up to 90 kilograms per hectare in low-yielding seasons.
Photo: Northern Grower Alliance

Harvest losses in chickpeas could be reduced by modifying header set-up, with potential benefits comparable to an extra 20 per cent in yield.

Over the past two years, a research project by the Northern Grower Alliance (NGA) and an observational study by MCA Agronomy have both looked into chickpea header losses.

NGA chief executive Richard Daniel says that while there have always been concerns about loss levels at harvest time, new varieties had increased growers’ worries. Many indicated high levels of harvest grain and pod loss, particularly in crops with reduced biomass that ‘feed’ poorly into the header. 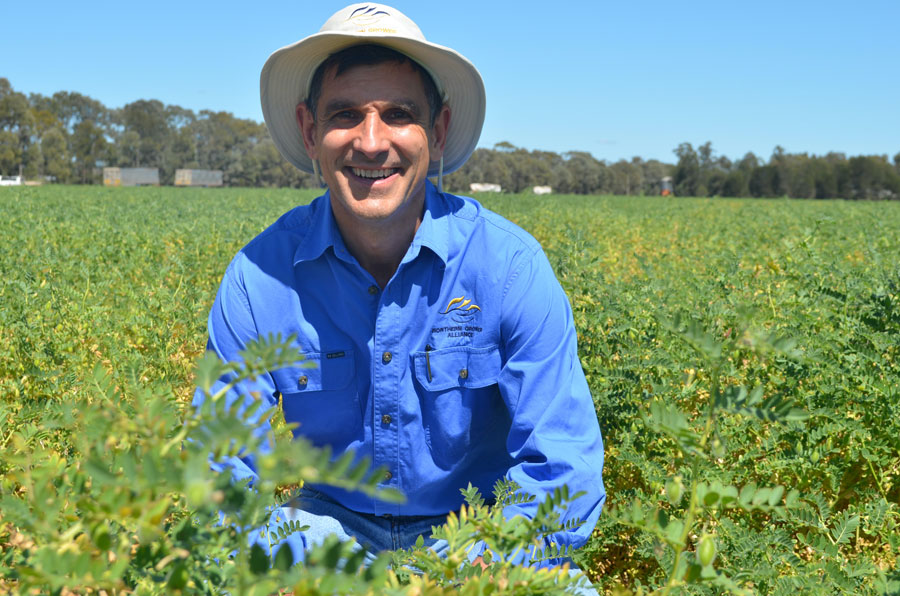 This loss is different to grain that passes through the header, called processing loss, or grain left on plants, called harvest height loss.

“Front-of-header grain loss is made up of pods and grain that are knocked off by the reel, cut off by the knife but fall outside the header front, or are thrown out from the header by the drum or belt.”

With GRDC investment, the NGA set out to investigate this loss, running four trials during 2018 and 2019, with additional trials also conducted in 2020. During the same period, with client help, MCA Agronomy also began its observations.

The NGA trials, which occurred in low-yielding years at Gurley, Wee Waa and Bellata (NSW) and Bongeen (Queensland), showed that header modifications, through air assist or reel brushes, could reduce chickpea harvest losses by 50 to 90 kilograms per hectare.

At all four trial sites, between 100kg/ha and 200kg/ha of grain was lost at the front of the header using a conventional set-up, with the majority of losses comprising whole pods rather than individual grains.

Mr Daniel says the work is important because it quantifies harvest losses in lower-yielding years. “It gives industry an understanding of those losses and whether the costs in adapting a header are justified.”

Adjustments made to headers can cost up to $25,000. Depending on how many chickpeas are planted in a rotation, this cost could be recouped in one season. “At losses of $50 to $70/ha, in many cases it will not take long to pay off.”

South-eastern Queensland agronomist and MCA Agronomy director Ed Offner says he was spurred on to look into harvest losses after noticing how many chickpea pods were left behind at harvest.

In an ‘observational’ study, the MCA Agronomy team found that losses were not variety specific and could reach $100/ha.

“The funny thing is, if I went to a client and suggested they invest in something that would cost them $100/ha, we’d have quite a robust discussion about it. Yet, they were losing this much at harvest.”

Grower clients had begun trialling ways to reduce losses, including adding paddles to the reel, fixing different light crop fingers, adding bristles behind the knife sections and a combination of these attachments.

“That grower was achieving a large reduction in losses,” he says.

“We became interested in the concept and started discussing it with clients.”

“The average improvement in losses was 180kg/ha, with one very short, low-yielding crop showing an extreme improvement of 297kg/ha.”

Mr Offner says the MCA data collected is limited but promising, especially with the NGA results showing similar improvements. However, he notes that the observational work occurred in very-low-yielding years.

“The results may not be replicated in more favourable seasons with taller crop canopies improving feeding over the knife.”

“In lower-yielding, lighter crops, plant material doesn’t flow effectively through the header front. The fuller the header front, the more effective it is. Both 2018 and 2019 were low-yielding seasons, with yields varying between 0.4 and 1.0t/ha, so caution is needed.”

“While assessing at one of the 2019 National Variety Trials’ chickpea sites, we looked at the results in the commercial paddock where some areas had even been left unharvested. The paddock only achieved about 300 to 400kg/ha in terms of yield, which was unfortunately quite common last season.

"But there was almost the same amount left on the ground. Certainly, an air-assist harvest would not have recovered all the pod losses, but the harvest job probably lost about $100/ha in yield.

“A lot of effort goes into breeding, agronomy and management. We don’t want to lose it at harvest.”

At the same time as it was evaluating harvest losses, the NGA was also researching existing and new desiccation tools, desiccation timing and its role in helping to create an efficient harvest.

It found that any impacts on yield and grain quality were relatively minor, even when application occurred significantly earlier than currently scheduled.

“If trying to justify the need to desiccate in a year where the crop is coming in quickly, it can be hard to put a case together. Desiccants certainly dry the crop down more quickly than without use, if wet weather is coming, which can be handy. But we have struggled to show any clear impact on yield or quality.”

Instead, its use will depend on prevailing conditions, harvest management choice, attitude to plant-back restrictions, weeds at harvest and the speed of desiccation required.

“This effect was irrespective of whether the plots had been desiccated or not. It is likely that the lower levels of damaged or split grain is at least partly due to the higher levels of grain moisture at harvest.”

As chickpeas dry out, they lose 1.2 per cent of effective grain yield for every per cent of grain moisture.

“To me, that says ‘get in there and harvest as soon as the crop is ready’. There is potential to deliver at higher moisture and be paid for a larger yield, but this will also assist in ensuring better grain quality.”