As the maize season ends in the tropics, the waiting game begins – what will fall armyworm (FAW) be attracted to next?

North Queensland agronomist Brent Wilson, who works for Nutrien Ag, is one of those most curious. The first to discover FAW (Spodoptera frugiperda) in the Burdekin, Queensland, in March 2020, Mr Wilson has quickly become an in-field expert on this invasive pest.

In his experience to date, Mr Wilson says FAW has tended to limit its destruction to maize, although it has also been found in sorghum, pulses and horticulture crops with minor feeding damage.

“FAW has focused its attention on maize, popcorn and sweet corn crops. Popcorn crops have suffered the most damage with yields significantly lower than previous seasons. The question now is where will it go?”

Overseas experience shows that FAW can migrate over large distances, yet the difference between infestations in the tropics and other parts of Australia could be in how long FAW persists as temperatures reduce in southern parts of Australia.

Leading Queensland’s response is Queensland Department of Agriculture and Fisheries (DAF) principal entomologist Melina Miles. She says FAW’s infestation in maize in the Burdekin and Bowen regions has been continuous, from crop emergence to maturity.

“Consequently, crop growth rates and yield potential are significantly impacted. Infestations during cob-fill cause reductions in yield and in grain quality, including the impact of secondary fungal and bacterial infections entering the cobs.”

In Australia, its potential effects on crops grown in more southerly areas and its seasonal migratory range are not yet fully understood, Dr Miles says. Geographic and climatic lessons will also be learnt.

“In theory, we could have a corn crop in Tasmania in January that has FAW. But the infestation will not last long because of the cooling temperatures. Whereas in the tropics, consistently warm temperatures have allowed FAW populations to persist and grow.” Mr Wilson outlines the steps to take if FAW infestation is suspected.

Step 1: Ensure that FAW is present, not Helicoverpa armigera

“Regular monitoring is absolutely critical. Get into the paddock. Mark out an area and check it two to three times each week.”

FAW’s early feeding habits create an etching or windowing effect on leaves, “a tell-tale sign” of its arrival.

This can be difficult and often leaf damage is seen before larvae are found. In maize, larvae have been found in the whorl, under wrapper leaves, in leaf axils, in silks and cobs. In sorghum it can be found on the leaves and in the whorl. As it can be hard to distinguish between FAW and Helicoverpa amigera, Mr Wilson suggests taking the larvae and some leaves home to grow the larvae out to the fourth instar to confirm identification.

“Take some pictures at the five-to-seven-day growth mark to confirm it is FAW. Unique identifiers of FAW are not pronounced until the later stages of its growth cycle.”

See the Beatsheet website for resources on FAW identification.

International thresholds are being relied upon at this point but will be updated as Australia’s FAW experience grows.

Mr Wilson explains that thresholds help make control decisions. “In some cases where larvae infestations in maize crops have been below the threshold of 30 per cent, ongoing regular monitoring was undertaken, rather than opting to apply an insecticide treatment immediately.

“The overseas experience has shown us how rapidly this pest develops insecticide resistance, so we need to use the chemistries we have in a controlled and measured way to ensure we have them when we need them.”

“The familiar ‘check and spray’ approach to pest management is not working as well as we would like. Cheap, broad-spectrum chemistry is unlikely to be effective because of insecticide resistance. What worries me the most is that the overuse of conventional chemistry will lead to an increase in resistance in both FAW and Helicoverpa armigera.”

For Dr Miles, the current FAW situation is reminiscent of the late 1990s, when Helicoverpa armigera was almost unmanageable because of resistance to synthetic pyrethroids and carbamates.

“Cotton growers were forced to spend up to $1800 a hectare to get a crop. There is probably already resistance to the older chemistry in the FAW population that arrived in Australia. If we repeatedly use the newer chemistry against them, we will see resistance issues rapidly emerge in FAW and in Helicoverpa armigera.”

She acknowledges that losing products such as Altacor®, Affirm® and Success Neo® is a sobering consideration. “I’m sure we can do better than repeat the mistakes of the past. We are looking to develop a better understanding of FAW and the tools available to manage it.”

There are differing options depending on crop type and infestation levels. The latest are outlined in the Fall Armyworm Continuity Plan, produced with GRDC investment and compiled by sustainable agriculture research organisation Cesar Australia, Plant Health Australia, the Centre for Agriculture and Bioscience International, and DAF.

Potentially, the range of options will include the use of selective insecticides; naturally occurring predators, parasitoids and pathogens (bacteria, virus and fungi); semiochemicals (such as Magnet®, an ‘attract and kill’ option); and mass trapping. Future options may include self-limiting FAW and genetically modified traits.

“To date, a number of parasitoids and predators have been observed attacking FAW. Most of these we are familiar with from other related caterpillar pests, like native armyworms and Helicoverpa.

“The beauty of natural enemies is that they can reach FAW eggs and larvae, where insecticides can’t. Whilst selective insecticides have been used preferentially, in maize these are limited to two applications per crop, and the broad-spectrum options are highly disruptive to natural enemies.” 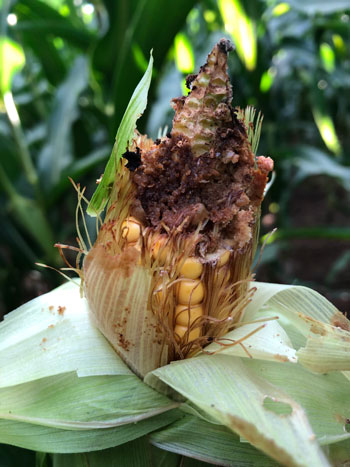 If managing insecticide resistance seems an impossible ask, Dr Miles says a resistance management schematic developed by DAF could help. It shows how available modes of action (MOA) might be deployed in a maize crop to manage FAW and reduce selection pressure on FAW and Helicoverpa armigera.

Importantly, she says, successive generations must not be exposed to the same MOA. This is why windowing is suggested. Area-wide compliance with a window- based strategy would further strengthen this resistance management approach.

See the GRDC presentation on FAW for more details.

The FAW learning curve has seen Mr Wilson scouring the internet and speaking with retail agronomists and university extension agronomists in the US. Although the information is helpful, the US situation is different to Australia’s. In the US, genetically modified Bt (Bacillus thuringiensis) corn is predominately grown. It is effective at controlling FAW, but this is unlikely to be an option in Australia just yet. Bt provides continuous control of larvae through the vegetative stages (in particular) and in feeding in sites where they cannot be easily contacted with conventional insecticides.

Another option open to US growers and being considered in Australia is a product called Fawligen®. It contains a Nuclear polyhedrosis virus (NPV) to which FAW is susceptible. This NPV is a new virus for Australia and requires review, in terms of its potential impact on native Australian species, if used here. DAF and AgBiTech have applied to the Commonwealth to import the product for evaluation in Australian research trials.

Dr Miles is positive that management options will expand, and levels of control will improve, as Australian growers and agronomists gain experience with FAW. Locally derived thresholds and understanding of the role of natural enemies will also contribute to confidence in managing the pest. In this regard, it is also important to acknowledge how confronting FAW damage can be.

“From a social perspective, we shouldn’t underestimate that.”

A list of current permits for FAW insecticide options is searchable via APVMA.