A shift in thinking has prompted Stuart McDonald to test new ways to build the long-term resilience of his family's 1363-hectare mixed farm near Canowindra, New South Wales.

The shift follows Stuart's completion of a 17-week study tour, with GRDC investment, that sought to explore more profitable and sustainable ways to integrate livestock into his family's grain-growing enterprise.

If done well, he says, improved integration of livestock and grain production can increase whole-farm income and make better use of available rainfall. 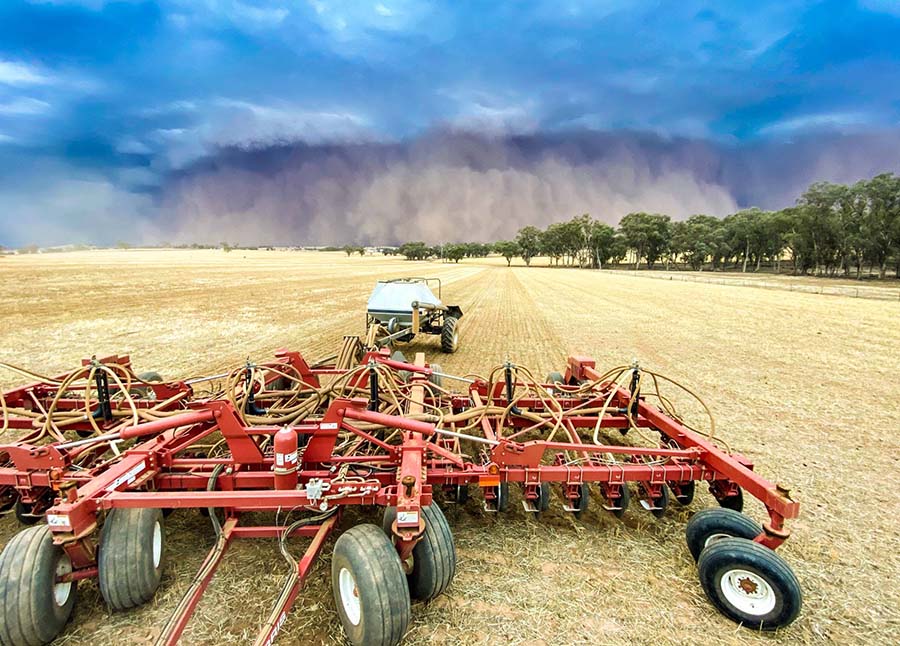 To fortify the business against future shocks, Stuart applied to Nuffield Australia to explore how best to integrate livestock and grain production.

Subsequently, he was named among GRDC's 2018 Nuffield Scholars.

Part of Stuart's 17-week scholarship included a visit to a farm in France where he saw poly cropping with buckwheat, canola and clover.

There, Thibault Presles told Stuart he planted the poly crop in one pass, yielding a positive gross margin and four to five separate harvests.

"The faba beans were terminated naturally with frost or with herbicides," Stuart says.

"But they were planted to feed the 'underground livestock' and his soils were the spongiest and most alive I saw."

In the Midwest region of the United States, Stuart visited growers who aim to have a living plant in the ground at all times.

"A farmer we visited, Jacob Miller, was sowing warm-season and cool-season forage mixes and grazing them intensively to improve his soil," he says.

Stuart also saw how cover crops could aid water movement into the soil, which he was told lifted microbial activity and the yields of subsequent crops.

"As a dryland farmer, water is the resource I cannot change," he says.

"But if we can manage how roots grow we have the ability to maximise the amount of water we can use." 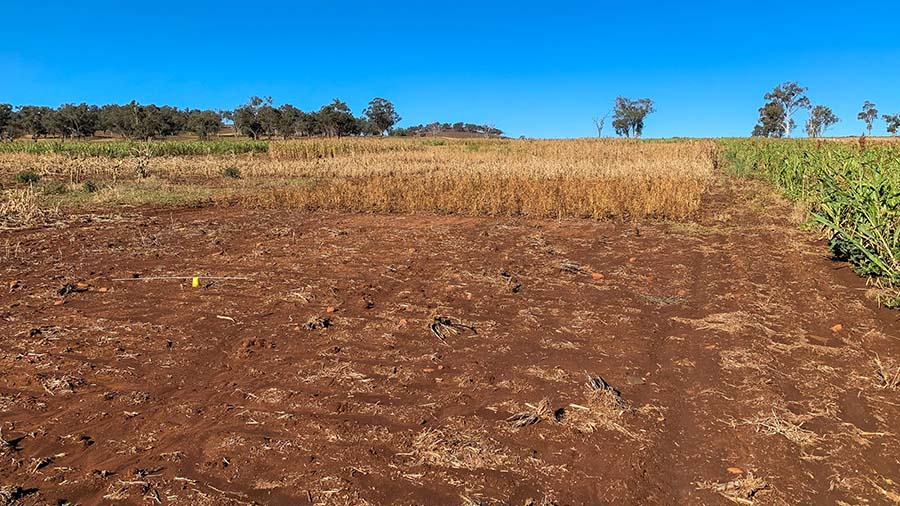 To date, dry conditions have constrained Stuart's capacity to test the concepts he saw oversees, beyond what many Australian mixed farmers already do.

Nonetheless, he remains passionate about running his own small experiments and hosting NSW Department of Primary Industries (DPI) trials.

Recently, Stuart hosted a two-year NSW DPI experiment on his farm with GRDC and Cotton Research and Development Corporation investment. 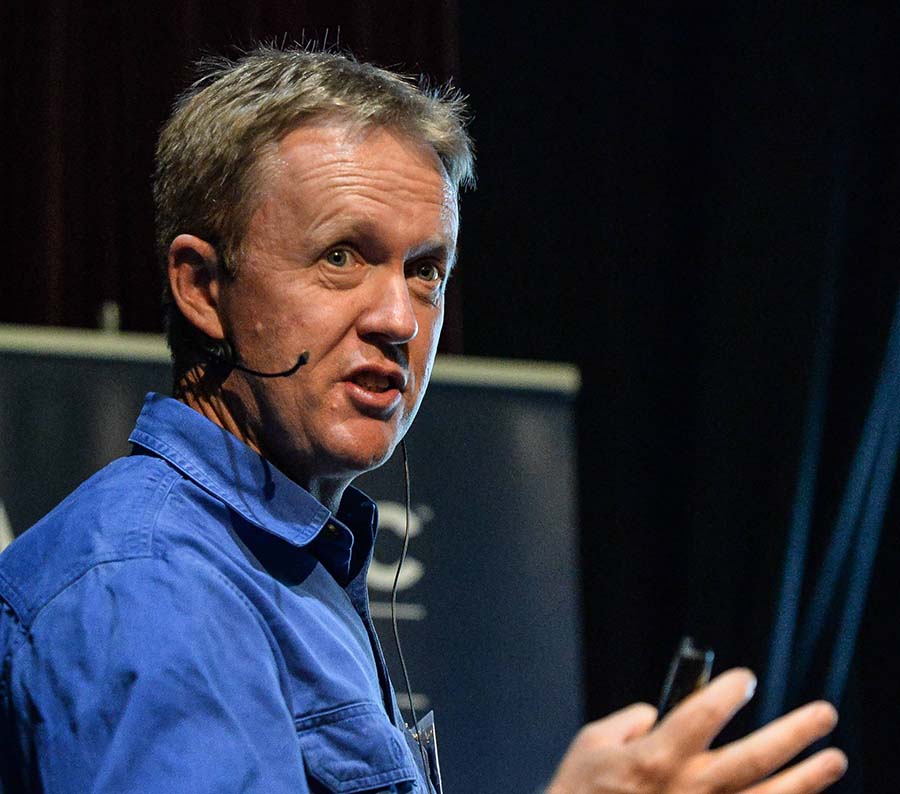 "The recharge rate was surprising and warrants further investigation to determine whether the soil water underneath the high-biomass treatments would overtake the bare fallow moisture levels in a normal year," Mr McMaster says.

For Stuart, the cover crop trial showed rainfall is more profitably used when it falls, which requires a more flexible approach to crop selection that favours appropriate species and varieties for the rainfall timing.

Although crop establishment was initially uneven, the 200mm of rain that was recorded until 8 April meant the waist-high crop would supply valuable feed for his sheep. Stuart says it will be followed by a winter forage crop to build soil carbon over time. 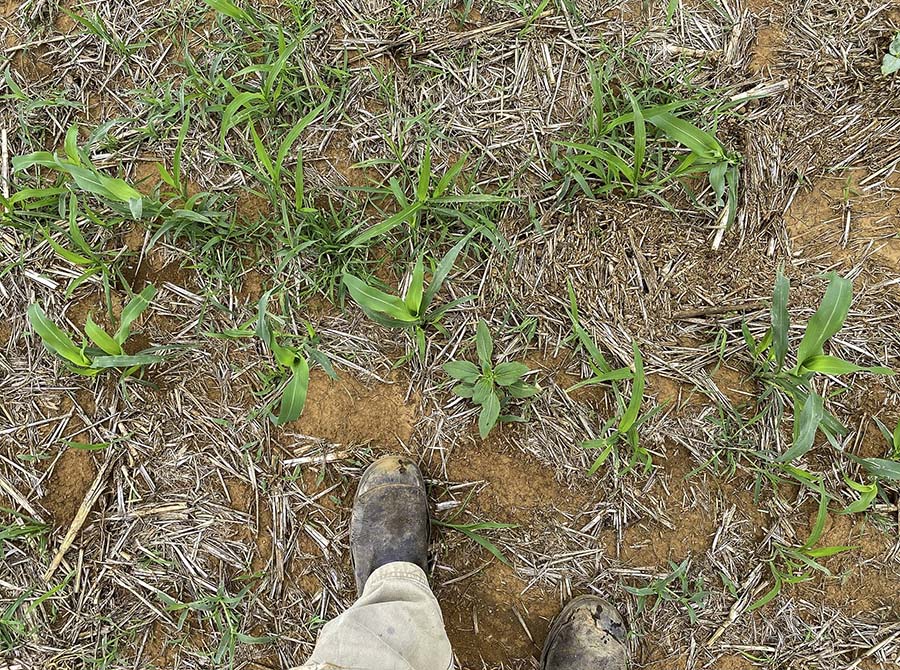 Stuart says integrating cover crops for grazing with his grain production is part of a new direction he has been working towards to increase plant diversity and farm resilience. Hosting the NSW DPI cover crop experiment gave Stuart a front-row seat to see what might be achieved by better integrating cover crops and livestock with grain production.

He now sees November or December rain as an opportunity to sow a cover crop in paddocks with little cover.

Another lesson learned was that high-biomass forage crops can tap into deeper subsoil moisture reserves and capture rainfall from intense weather events.

"Colin's research demonstrated that late January is an ideal time to terminate a cover crop, allowing paddocks to harvest rainfall before a winter crop is planted," he says.

"February storms are not uncommon in this area."

Additionally, the trial showed growers with livestock can capitalise on the increased biomass available from cover crops when red meat prices are high.

Mr McMaster says the grazing value available would more than compensate for the grain yield penalty of the winter crop and provide additional income to buy more nitrogen to support the high-output system.

Stuart has two 17ha paddocks dedicated to testing the concepts he saw overseas and adapting them to his environment.

One adaptation he is working on is having a living root in the soil for as long as possible.

"I want to see if I can establish a mixed-species summer crop in November or December, terminate it in early February, harvest moisture after the crop is sprayed out and build ground cover to protect the soil," he says.

"If we want to harvest grain from the following winter crop, we will need rain from planting to spring."

In some years, Stuart says his planter has bogged and water has run off paddocks. In years like this he says a six-week summer cover crop may help improve paddock trafficability, while also allowing him to harvest a reasonable winter grain crop.

"Our winter grain cropping is built around harvesting summer moisture so it is dangerous to say 'we will throw that away' without sufficient on-farm tests," he says. Stuart McDonald has two 17ha paddocks set aside for testing some of the concepts he saw overseas and adapting them to his farming system.
Photo: Stuart McDonald

"We can grow biomass through the year and Colin McMaster's trial has given us a clear understanding of the costs and benefits to our livestock and grain enterprises."

"I'd love a garden-like soil, but if I am selling it to my neighbour, there's no point," he says.

"That is where we hope to use grazing to add income to our whole-farm business while also building the resilience of our soils."