Stuart says the 17 weeks he spent visiting other growers, with GRDC investment through a Nuffield Scholarship, pushed him out of his comfort zone and inspired experimentation and change on his 1363-hectare family farm.

Now, ground cover is prioritised on his Canowindra property to cool the soil over summer, reduce moisture evaporation and speed rainfall infiltration.

"I have become less enthusiastic about making hay and overgrazing since seeing the benefits of ground cover overseas and at home in dry seasonal conditions," Stuart says.

"I want to avoid compacting the soil surface so it can take in the maximum available rainfall over summer."

To preserve available ground cover, Stuart is building containment yards to accommodate up to 2000 sheep whenever grazing conditions do not benefit animals or paddocks. 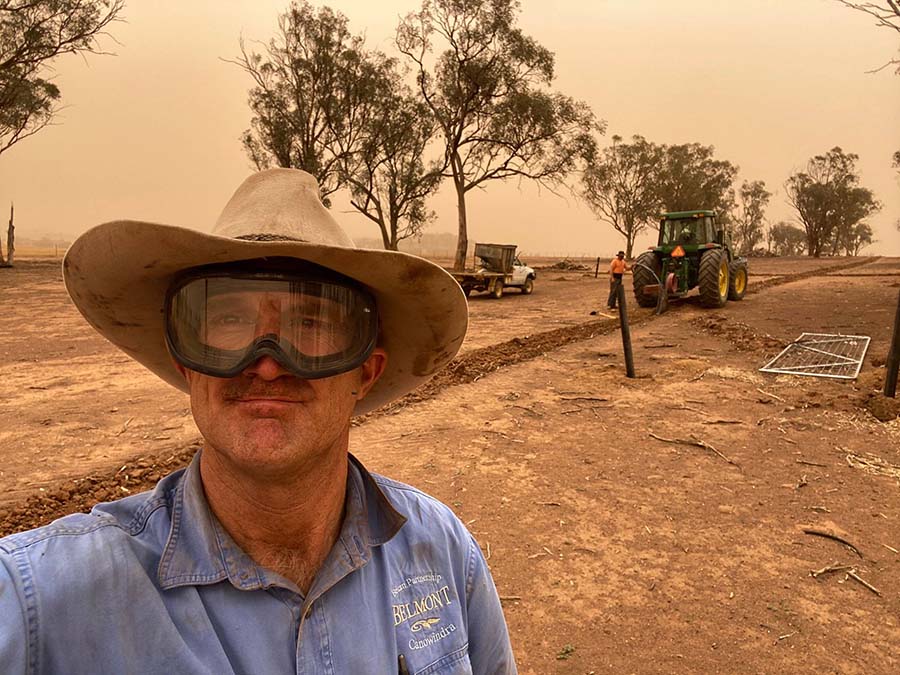 Stuart McDonald in dry and dusty conditions earlier this year while plumbing water into the containment yard he is adding as a permanent fixture on his family's mixed farm near Canowindra, in central New South Wales. Photo: Stuart McDonald

Stuart says his travels have encouraged him to trial some of the tactics he saw overseas growers using to add diversity to his mixed farming system. One tactic he has tested is companion planting.

In 2019, Stuart sowed wheat and chickpeas together in two 17ha trial paddocks that had been sown previously to a mixed-species summer forage crop.

While the wheat-chickpea mix established well, producing good levels of biomass, the companion crop ran out of moisture when the season turned dry.

"I had hoped to harvest the chickpeas, but they were droughted out by the wheat and died," he says.

"We harvested one light 17ha wheat crop and lightly grazed the remaining 17ha."

Stuart says he would trial the mix again if it was planted into a paddock that had been fallowed over summer.

Dry conditions take away a bit of the experimental enthusiasm, he says, but there is potential for a wheat-chickpea mix to produce grain in a high-rainfall season.

When GroundCover™ spoke to Stuart earlier this year, he planned to expand his PBA HatTrick (PBR) chickpea plantings.

Additionally, he hoped to bulk up LRPB Mustang (PBR) wheat as a replacement for AGT Condo (PBR).

He says the decision was made after NSW Department of Primary Industries trials, with GRDC investment, showed early termination of a mixed-species summer forage crop enabled the winter crop to yield 2.15 tonnes per hectare of grain.