Figure 1: Five years of effort at UC Davis has developed wild-cultivated hybrid germplasm that is under analysis for aluminium and acid soil tolerance.
Photo: UC Davis

Roughly 50 per cent of the Earth's arable land is classified as acidic, with soil pH of 5.5 or less. Soil acidity is a primary factor limiting agricultural productivity and pH often decreases with the intensity of agricultural practices.

For Western Australia in particular, soil acidity is a major cropping constraint. Extensive surveys of soil pH profiles across the state's south-west show that more than 70 per cent of surface soils and almost half of subsurface soils have pH values low enough to have a negative impact on agriculture.

An international alliance between scientists at the University of California-Davis in the United States, Addis Ababa University in Ethiopia and Murdoch University in Western Australia (with GRDC investment) is investigating genetic solutions to improve chickpea adaptation to these challenging acidic soils.

The nature of acid soil tolerance of chickpeas is complicated as it is interrelated with phosphorus response.

Low pH acts in large part by increasing the solubility of toxic ions (especially aluminium and manganese) and reducing the bioavailability of key nutrients (especially phosphorus). These two factors, toxicity and reduced soil fertility, are the drivers of reduced productivity in acid soils.

Some plants exhibit tolerance to acid soils, which frequently involves exclusion from, or tolerance to, aluminium in the actively growing root tip. Tolerant root tips continue to grow and function, even though their growth rates may be diminished. Sustaining root function allows tolerant plants to access water and nutrients and maintain yield potential.

Under acid conditions, aluminium ions have an immediate effect on root growth, adversely affecting root tip physiology through biochemical interactions. Some plants, however, can reduce the level of active aluminium in the soil near their roots by secretion of organic acids (often malate or citrate), which lock up otherwise toxic ions. This way plants can create a tolerance to acid soils.

Low-pH soils are also often phosphate-deficient, because aluminium has the effect of making phosphate unavailable to the plant. Research suggests there is a link between aluminium tolerance in plants and their response to phosphorus stress.

Indeed, genes for aluminium tolerance can also increase phosphorus uptake (and subsequent grain production). While these interactions are complex, one common feature is the development of more-favourable root system architectures arising from the plant's aluminium tolerance. This is why it makes practical sense to consider both aluminium and phosphorus when evaluating plant tolerance to acid soils.

The wild germplasm was collected from the Mesopotamia region of south-eastern Turkey. This six-year activity was based on shared investment from GRDC, the US Agency for International Development and the US National Science Foundation.

This tiered approach provides a multi-pronged breeding approach. It uses genetic variation within elite cultivars, then wider genetic variation present in landraces and then the widest genetic variation from wild-cultivated crop hybrids. This allows initial breeding to utilise the first source of breeding, while subsequent breeding efforts seek to incorporate the more diverse germplasm sources, which may also possess undesirable breeding characteristics that need to be eliminated.

Importantly, the wild-crop hybrid germplasm was recently introduced from UC Davis into Australia and is undergoing quarantine prior to seed increase.

Much of the previous work on acid soils and aluminium tolerance in chickpeas has used hydroponic screening chambers and single aluminium concentrations. Such studies oversimplify the root environment and have broadly failed to deliver tolerance for agricultural situations. Moreover, most previous studies used toxic concentrations of aluminium, which missed potentially important physiological responses that occur at lower aluminium levels. 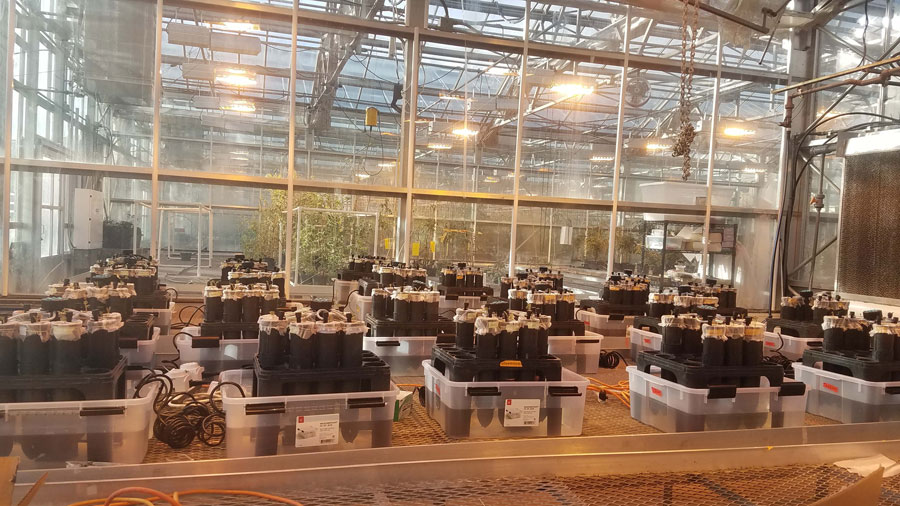 At UC Davis, these challenges have been addressed by completely revising plant assays. The UC Davis group has developed a synthetic soil-based assay that quantifies several aspects of plant growth across a standardised range of aluminium concentrations. Moreover, due to the genetic structure of the wild-crop hybrid populations, trait data can be analysed using genetic tools, which will uncover molecular markers linked to traits. Such information can translate directly into breeding programs and facilitate the release of novel, superior genotypes.

The aluminium tolerance screening strategy at UC Davis develops a quantitative 'response value' for tolerance, allowing genotypes to be rationally compared (Figure 2). Each genotype is assessed for performance at six aluminium concentrations across a 20-fold range. Data is collected on plant productivity (root and shoot biomass) and root architecture. Image data is processed to quantify total root length and density, lateral root production, root width and area, and branching patterns. 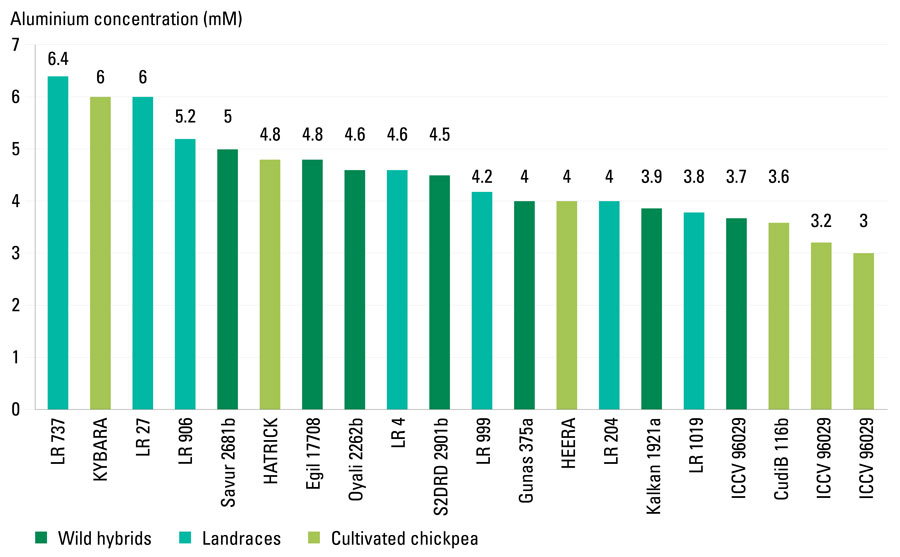 Although the assay is time consuming and requires high replication, the initial results are promising. Early efforts optimised and standardised the assay, while recent efforts focused on quantifying the response of several elite cultivated, landrace and wild-crop hybrid genotypes.

The ultimate objective of this work is to introduce high-value aluminium-tolerance genes into elite crop varieties that perform under a range of environmental and growing conditions, which will provide Australian growers with greater options for sustainable and profitable farming systems. Efforts so far have touched less than 0.01 per cent of available germplasm and short-term efforts will increase screening of wild-crop hybrids.