Breeders are seeking to optimise wheat productivity in a range of trials, including this site on the Liverpool Plains, NSW.
Photo: GRDC

Dr Jefferies says pre-breeding research must focus on developing tools and technologies which enable breeders to increase the speed of variety development and the magnitude of yield, disease and quality improvement per breeding cycle.

GRDCs multi-pronged approach to pre-breeding involves focusing on the key pillars of:

Dr Jefferies came to GRDC in 2016 from Australian Grain Technologies (AGT), Australias largest and market-leading wheat-breeding company. Prior to that, he was a University of Adelaide wheat breeder and senior lecturer. 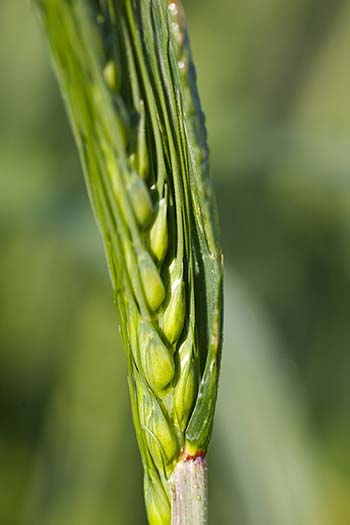 Australian researchers were among 200 scientists from 73 research institutions in 20 countries that unlocked the complete wheat genome in 2018, after 13 years of collaboration.

The success, supported by GRDC, paves the way for accelerated development of wheat varieties with higher yields, enhanced nutritional quality and improved sustainability, that can better adapt to climate challenges.

Wheat is the staple food for more than a third of the worlds population. It accounts for almost 20 per cent of the total calories and protein consumed by humans.

Due to its complex genetic make-up, genetic improvements to wheat varieties have been harder than in crops such as rice and corn.

The International Wheat Genome Sequencing Consortium says to meet a projected world population of 9.6 billion by 2050, wheat productivity needs to rise by 1.6 per cent a year.

Much of this increase must be achieved via crop and trait improvement to preserve limited natural resources.

It says the full genetic map of wheat will allow breeders to identify faster the genes and regulatory elements underlying complex agronomic traits, such as yield, grain quality, resistance to fungal diseases and tolerance to abiotic stress.

The wheat genome sequence lets researchers look inside the wheat engine and reveals tools to vary and adapt to different environments through selection, as well as sufficient stability to maintain basic structures to survive under various climatic conditions.

The International Wheat Yield Partnership (IWYP) aims to raise the genetic yield potential of wheat by 50pc in 20 years.

At the fundamental level, this will be achieved by improving wheats ability to capture and process the suns energy, through photosynthesis, and making sure the captured carbon ends up in the wheat grain.

Even increasing wheats photosynthetic efficiency from 1 to 1.5 per cent would allow growers to increase their yields on the same amount of land, using no more inputs.

Periods of extreme high-temperature, in particular short periods of heat shock, are a major threat to wheat yield and grain quality throughout much of the Australian wheatbelt.

Investments such as this will help breeders in converting genetic variation for heat tolerance into yield gain for Australian growers, he says.

Professor Richard Trethowan, of the University of Sydney, says it is vital new wheat germplasm with improved high-temperature tolerance, and molecular tags linked to this tolerance, are developed for use by commercial breeding programs.

While the effects of high-temperature on yield and grain quality are well known, those traits underpinning plant response to high-temperature and the inheritance of tolerance are less well understood," he says.

Professor Trethowan is leading a GRDC investment to undertake extensive phenotyping of wheat lines produced from a diverse range of international sources.

These wheat lines are being assessed for field response to high temperature using both traditional and new phenomic methods, he says.

We are also looking to calculate genomic breeding values for heat tolerance to select the best crosses to generate the next generation of lines."

A major stumbling block to the genetic improvement of all complex traits is accurate phenotyping and the lack of broad scale and relevant phenotyping strategies have historically limited genetic progress.

A critical element of this investment has been the development of accurate field-based heat phenotyping methods," Professor Trethowan says.

"These heat chambers can accurately apply heat to plants in the field.

The stage is set to now develop new and improved germplasm using the latest molecular tools and associated breeding strategies.

Genomic selection is a breeding method that requires a reference population consisting of wheat lines that are phenotyped for the trait of interest and genotyped at many DNA markers distributed across the whole genome.

Various statistical methods are then used to estimate the effect of each DNA marker on the phenotype. The collection of all these DNA marker effects is called a prediction equation that predicts a genomic breeding value of a wheat line.

This prediction equation can then be used to predict new plants that are only genotyped and do not have a phenotype.

This allows for early selection of plants/lines without them having to be phenotyped, which can decrease breeding cycle times and increase genetic gain substantially.