A four-hectare site carved from a wheat crop at Hagley in north-central Tasmania has captured the imaginations of grain growers across the country.

This is because the patch of red soil in the high-rainfall zone (HRZ) was the epicentre of the GRDC-invested hyper-yielding cereals project, and home to its main trial site for the past four years.

Foundation for Arable Research (FAR) Australia managing director Nick Poole, who led the project in collaboration with Southern Farming Systems, considers the step-change in yield potential it has provided. The project has set new benchmarks for productivity in irrigated feed wheat and barley crops in Tasmania, Mr Poole says.

The new benchmarks, based on consistent findings from three years of trials, are 13 to 13.5 tonnes per hectare for wheat and more than 10t/ha for barley, he says.

However, the trials also show it is possible to exceed these indicators of cereal production potential, with yields from the experimental plots peaking at 17.27t/ha for wheat (believed to be the Australian record) and 12.62t/ha for barley. In theory, higher yields could be achieved for irrigated feed wheat and barley. The trials testing cereal performance used supplementary irrigation only, Mr Poole says.

He says the research, development and extension (RD&E) effort, and the benchmarks it has established, aims to close the yield gap between potential and actual crop yields for feed wheat and barley in Tasmania.

This was the main objective of the project since the average yield for red grain feed wheat in Tasmania prior to 2015 was 4.4t/ha, and the state remains a net importer of cereal grain. For example, Tasmania produces about 60,000 to 80,000t of cereal grain a year and imports 150,000t.

“A major aim was to reduce the dependency of end users such as the dairy industry on the federal government subsidising transport costs for imported grain,” Mr Poole says.

“Despite a more suitable climate for grain production and much higher yield potential than the mainland, the average yield of feed grain cereals was below its potential for the climate and soils in Tasmania.

“The project was set up to identify new feed cereal germplasm and management approaches that could lift the state’s feed grain productivity.”

The trial program examined Australian and international germplasm candidates, specifically selected for Tasmanian growing conditions, sourced from the mainland and the UK. 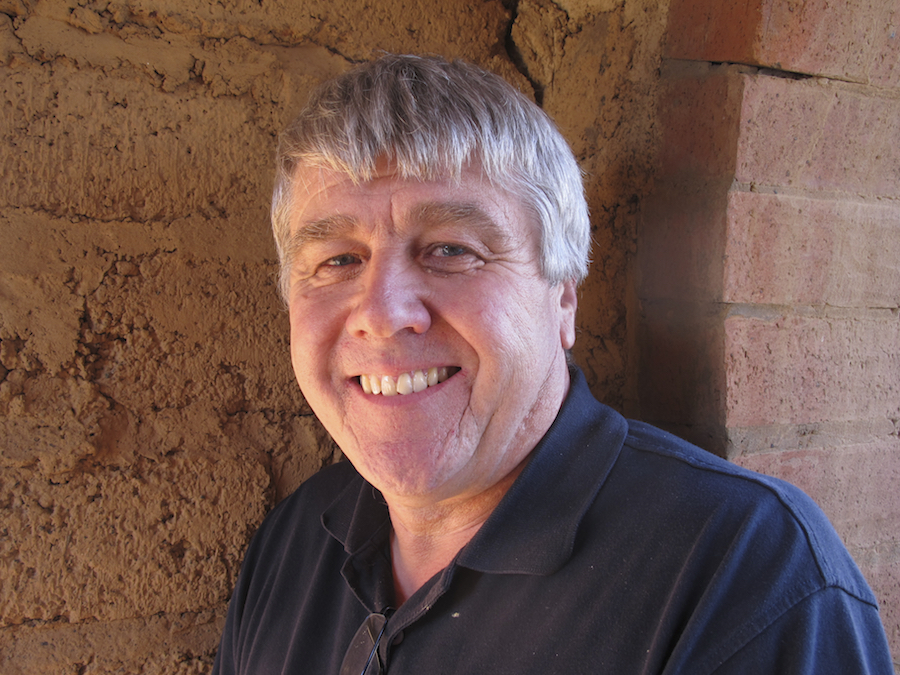 “Four winter wheat and two spring barley lines have been identified to underpin the benchmarks in productivity,” Mr Poole says.

These were discovered in the project’s initial two year-phase (2016-2017), which saw researchers compare the new germplasm with cereal varieties predominantly grown in Tasmania: SQP Revenue and Manning wheat, and Westminster barley.

The wheat and barley germplasm was then screened for four main attributes: high yield, straw strength to reduce susceptibility to lodging, disease resistance and plant development (phenology) suited to April sowing in Tasmania.

Meeting these selection criteria were the wheat lines RGT Relay, RGT Accroc, Annapurna and RGT Calabro, as well as the barley lines Rosalind and RGT Planet. Annapurna wheat is in the process of being commercialised.

But critical to securing the yield potential of this high-performance germplasm are the agronomic strategies developed through the project, which were put to the test in three years of trials. “Keeping 10t/ha crops standing was a major objective of the research,” he says. “Cereal crops in Tasmania also tend to have larger, slower-growing canopies compared with those on the mainland, particularly with irrigation.

Intervention with plant growth regulators and knowledge of canopy management to promote robust straw strength is essential to achieving the yield potential of some hyper-yielding varieties.

These included applying the plant growth regulators (PGR) Moddus and Errex at growth stage 31 to 32 at recommended label rates, or dividing the same amount of active ingredient between two applications at GS30 or start of stem elongation and at GS32 or second node.

Mr Poole says split PGR applications were more effective than a single application, particularly where wheat grown for grain only (not grazing) was sown in early April.

The trials also highlighted that time of sowing, particularly delaying sowing from early to late April, was an effective tactic for reducing lodging.

For example, sowing RGT Accroc wheat in early April resulted in high rates of lodging, the severity of which increased with plant population density. However, where the same variety was sown in late April, there was no lodging, and the effect of plant population (70 to 185 plants per square metre) on lodging was neutral.

But for varieties less susceptible to lodging, such as RGT Relay and RGT Calabro wheat, the highest yields were achieved where crops were sown in late April with higher plant populations. Sowing these varieties at populations of 180 to 190 plants/m2  lifted yields by 1t/ha compared with populations below 100 plants/m2.

“Project results demonstrated that using PGRs to prevent lodging in April-sown crops could generate yield gains of more than 2t/ha, but more typically the yield gain was 1t/ha.” Grazing was found to provide “significant advantages” in preventing lodging where wheat was sown in early April, especially in varieties with weaker straw, such as RGT Accroc.

“Grazing was frequently associated with the lowest grain yields, but depending on dry matter prices, some of the better overall gross margins,” he says.

Mr Poole says disease management was another major focus of the study since Tasmanian crops are vulnerable to high pressure from disease-causing fungal pathogens as a consequence of the state's high-rainfall climate and long growing season.

Cereal cropping generally runs from April to January (early barley harvest) and as late as March.

“The growing season in Tasmania is more disease-prone than any other environment in Australia,” he says.

Mr Poole says the strategies developed for the timing of fungicide applications are “crucial for optimising the productivity and profitability of hyper-yielding cereals”.

Trials in the final two years of the project (2018 and 2019) showed the return on fungicide investment for the hyper-yielding wheat lines was typically $3 to $4 for every dollar spent.

“But for some cultivars, such as DS Bennett, the return on fungicide expenditure was much higher at $13 return for every dollar spent,” he says.

The exception to this finding was RGT Planet barley. Trials showed fungicide investment returns from this variety were more variable, with expenditure returning $7 for every dollar spent in 2018 compared with about $3 in 2019. The timing of fungicide applications for controlling crop diseases, such as stripe rust, is crucial for optimising the productivity and profitability of hyper-yielding cereals. Photo: FAR Australia

Mr Poole says the discovery of a seed-borne barley disease, Ramularia leaf spot, as well as options for its control have also positioned growers to improve barley cropping performance in Tasmania.

“The study was one of the first conducted in Australia to show control of this disease,” he says. 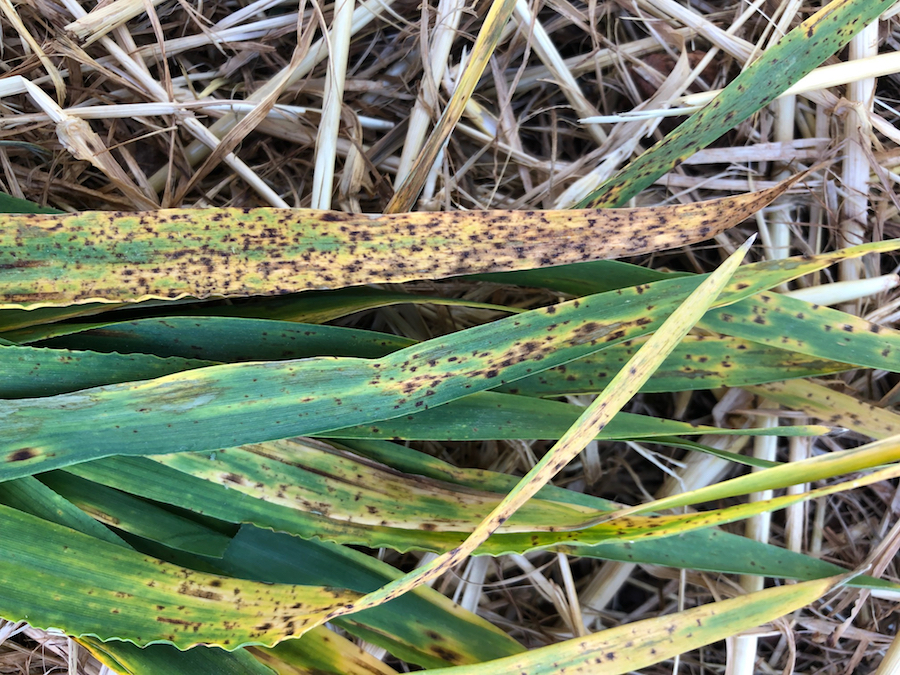 Mr Poole says an important finding was that Tasmanian cereals, which produced high yields, were mainly drawing on nitrogen reserves contained in fertile soils, rather than applied synthetic nitrogen fertiliser.

High soil fertility, including soil nitrogen, is characteristic of many farming systems in Tasmania, since they often feature a diverse enterprise mix with long-term rotation phases, including livestock, he says.

"In all years of the project, it was noted that high yields were evident in trial plots that received either no applied nitrogen fertiliser or relatively modest rates.

For instance, 2016 trials showed cereals yielded 14 to 17t/ha, even though applied fertiliser rates were relatively low at 150 to 220 kilograms of nitrogen per hectare.

“This indicated that the Hagley research site had high levels of inherent soil fertility due to the farm's cropping history, with long rotation phases of lucerne and large basal fertiliser applications for crops such as potatoes.”

Mr Poole says analysis showed that cereal crop canopies (at harvest) had frequently removed more that 300kg of nitrogen/ha from the soil.

He urges growers to position cereals in the rotation following a pulse, brassica or long-term pasture phase to maximise yields. “Recent analysis of wheat trial data in the UK also suggests that high-yielding wheat is produced on soils that would themselves generate high yields without the use of synthetic fertiliser.”

The research team collected more than 250 grain samples over four seasons to determine their quality, particularly the nutritive content of hyper-yielding cereals for sheep, cattle, poultry and pig enterprises.

Near-infrared spectroscopy analyses of the grain samples for major nutrients at the Feed Quality Service laboratory in Wagga Wagga, New South Wales, found that feed grain quality is determined by seasonal conditions and agronomic practices, rather than variety type.

Analysis also showed Tasmanian feed grain was one of the country’s top performers for quality, and that variable energy and starch levels detected in wheat samples could be used to differentiate prices for segregated feed grain.

Mr Poole says the project, and other trials on the mainland, show hyper-yielding cereal varieties and agronomic strategies can be adapted to cropping areas across the country’s other HRZ growing regions.

The influence of the research on mainland cropping regions was highlighted by the number of interstate visitors to the annual field day at the main Hagley trial site.

“Mainland visitor numbers grew each year and in the final two years they outnumbered the Tasmanian visitors,” Mr Poole says, adding that the field day attracted interstate growers not just from the HRZ, but also from medium and low-rainfall zones.

Building on the hyper-yielding cereals project in Tasmania that concluded last year, GRDC has invested in a new national initiative to push cereal and oilseed yield boundaries in cropping areas across the country.

Also leading the new project, Mr Poole says, “This initiative is about trying to improve productivity, increase yields and close what we believe is a significant yield gap (between potential and actual yields) in parts of Australia's high-rainfall zone.” 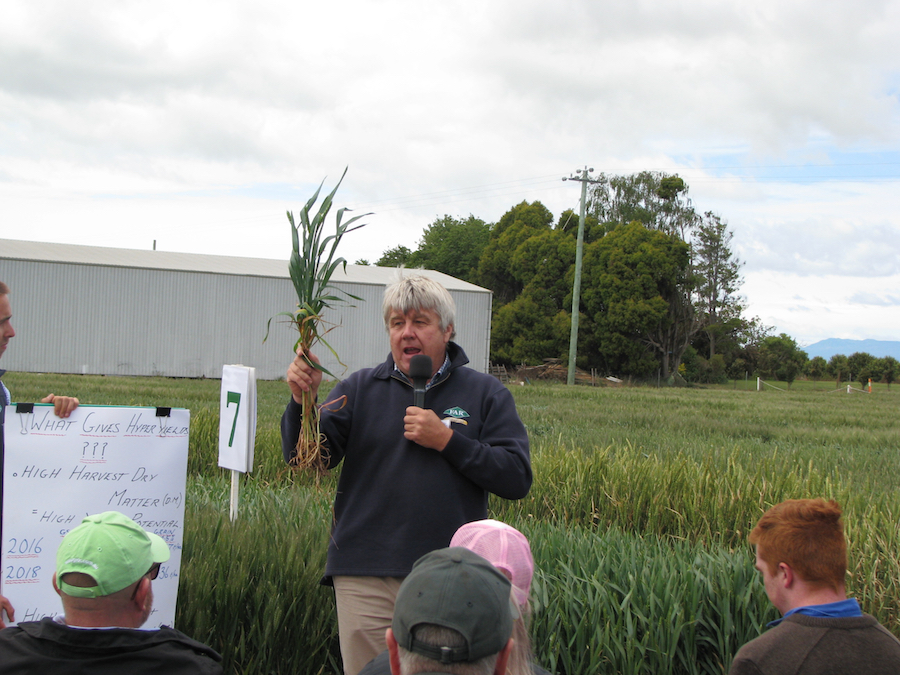