The trials are part of a two-year GRDC investment, led by SLR Agriculture, focusing on the relationship between the long coleoptile trait and agronomic factors including time to emergence, soil temperature and planting depth, as well as the combined effect of these factors on crop establishment.

Following the success of last year’s trials, sites are being sown this year at Yuna, North Ballidu, Meckering, Muntadgin, Pingaring and Esperance. At North Ballidu, trials sown into moisture at a depth of 130mm were already showing good emergence just nine days after sowing. 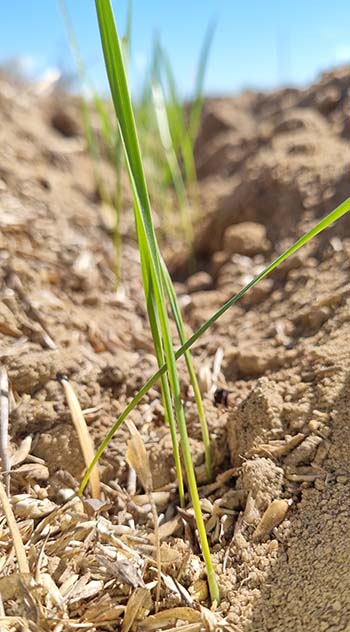 The coleoptile is a modified leaf which protects the developing shoot as it emerges. A longer coleoptile enables seed to be sown deeper. The ability to deep-sow means better use can be made of stored soil moisture.

A longer period for root growth will also increase access to deeper moisture and opportunities for exploring increased nutrient uptake.

Project lead Michael Lamond of SLR Agriculture says that the long coleoptile trait stands to become an important risk-management strategy for Western region growers to respond to the changing climate and increasing enterprise size, which is extending the sowing period.

“With long coleoptile lines, growers can chase moisture deeper in soil profiles from summer rains prior to normal sowing windows in medium to low-rainfall zones. By sowing into moisture with a variety with correct genes for a planting date, a spring flowering window is more certain than with dry sowing,” Mr Lamond says.

“While the long coleoptile trait has been around for a long time, renewed interest in the trait from growers is due to extensive research conducted by Dr Greg Rebetzke and the team at CSIRO Agriculture and Food.”

There are three distinct groups when considering coleoptile traits:

Results from last year’s trials were presented at the GRDC Grains Research Update in Perth in February. Twelve varieties with standard, longer or long coleoptile traits were trialled across the sites, at various sowing depths.

“The split in emergence from deep sowing to shallow sowing was very dramatic. We could see the difference across the trial plots, not only in plant density, but plant vigour as well.

“Sowing these varieties appeared to give growers the ability to chase moisture down from a summer rainfall event rather than sowing dry and waiting for a general break to the season.”

“Through over 35 grower groups, approximately 600 farmers have been exposed to the first year’s findings from the project,” Ms Asquith says.

“Visits to the trial sites have engaged growers in really topical discussions around issues related to long coleoptile varieties such as herbicide interaction, risk of furrow fill, soil amelioration and improved crop safety.

“The second year of GRDC’s investment will take this project into additional regions, with the two new trials extending into the Geraldton and Esperance port zones, in addition to four trials in the Kwinana East, Kwinana West and Albany zones.

“It’s an exciting time for WA wheat growers, who will no doubt be eager to see the results from new long coleoptile varieties and extended trial locations.”

GRDC has invested in ongoing research and development of the long coleoptile trait, and currently has a request for tender open focusing on integrating long coleoptile wheat into Australian farming systems.

Ms Asquith says that GRDC continues to work with research partners on a range of investments to develop tools and technologies that offer growers choices and information about ‘when, how and what to sow’ to maximise their overall profitability.

Further information on long coleoptile research is available in the following GroundCover articles:

The recording of Michael Lamond’s 2022 Grains Research Update presentation on this project is available on the GRDC website past events page.