The ‘amelioration ripper’ built by Toowoomba-based machinery manufacturer TTQ is playing a key part in a transformational soils project. It consists of three front tynes, which can rip to a depth greater than 800 millimetres, and five back tynes that are set for deep nutrient application depending on both the front tynes and paddock requirements.
Photo: Stirling Roberton

Researchers were faced with a significant engineering challenge when it came to tackling subsoil constraints – how could ameliorants, such as gypsum, be applied variably but also at depths not attempted before?

The University of Southern Queensland’s (USQ) Professor John McLean Bennett and Dr Stirling Roberton are working to ameliorate the northern region’s major soil constraints – compaction and sodic and/or dispersive soils – through a project co-invested by GRDC, USQ and the Department of Agriculture and Fisheries (DAF).

To do so, they needed a way to get deep into the soil. Rising to the challenge was Toowoomba-based machinery manufacturer TTQ. Taking USQ’s initiative to engineer a solution, TTQ created a machine dubbed the amelioration ripper.

It consists of three front tynes, which can rip to a depth greater than 800 millimetres, and five back tynes that are set for deep nutrient application depending on both the front tynes and paddock requirements.

Despite some engineering challenges, TTQ director Geraint Hudson enjoyed the task, encouraging the researchers to dream. “I told them not to limit themselves, to draw up a wish list and we would see what we could do. We came back with a counter-offer of sorts, and after a few more meetings and a few more months, the machine was built.”

TTQ and USQ also worked with Coalstoun Lakes-based Seabrook Seeders on the bins and metering units that sit above to deliver ameliorants. 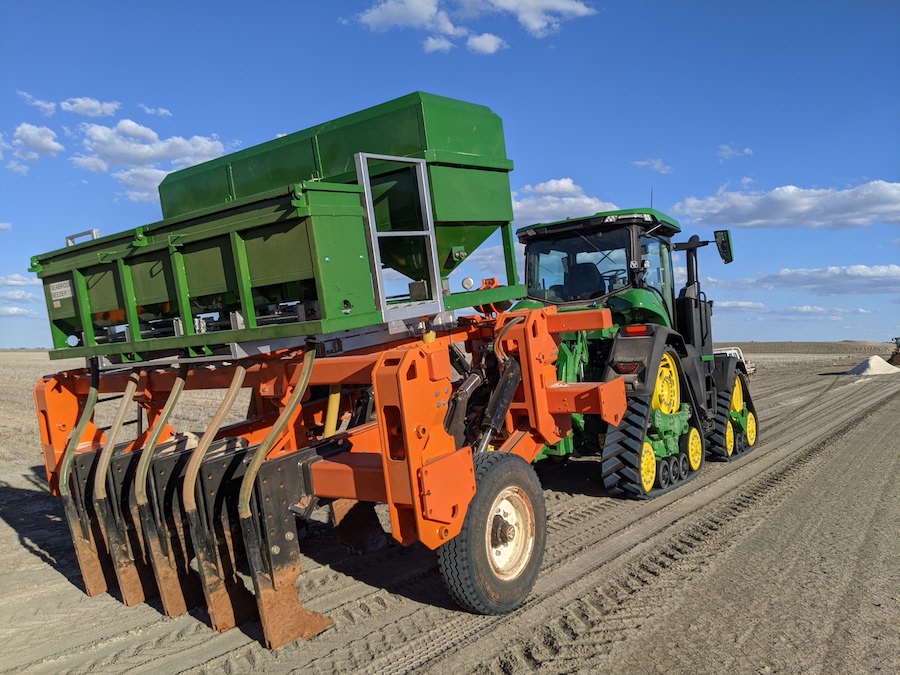 The ‘amelioration ripper’ is overcoming a significant engineering challenge – variably applying ameliorants such as gypsum at depths not attempted before. Photo: Stirling Roberton

The machine has been used across the northern region since January in on-farm trials where the aim is to use gypsum strategically, not blanket paddocks with it.

It will head to Jack Pearlman’s property later in the year when ripping conditions are favourable. However, Professor Bennett and Dr Roberton have already helped to pinpoint areas at the farm that need attention.

Jack farms 3300 hectares at North Star, northern New South Wales, with his parents Michael and Kylie. They had been planning to spend about $50,000 on gypsum, applying it to address perceived sodicity issues.

However, an aggregate stability test showed that the soil was not dispersive but naturally hard-setting and gypsum would not help. Instead, fracturing the hard-set soil through ripping while improving organic matter and stubble retention should be the focus. Dispersive conditions in the surface and subsoil were identified in other areas of the paddock, where the deep gypsum trial is planned.

Dr Roberton says an aggregate stability test should be done before any major work. It reflects on research that is finding that industry reliance on measuring sodicity to indicate soil instability is misplaced.

Jack, who is enjoying the trial work with Dr Roberton and Professor Bennett, welcomes the chance to better understand the farm’s soils and how to best ameliorate them. He moved back to the farm in 2015 after completing an agribusiness degree at the University of Queensland. Since then, he and his family have found variability more noticeable.

“We’ve always had variability and soil-tested for nutrients, but we have become more aware of it and thinking of how to address it. Last year, for example, the crops looked the same for the first 12 weeks post-emergence. They were coming along nicely. But then the roots must have hit something in the soil and some of it started to pull back. Some of the areas hit were just two metres from better-performing parts of the paddock. It drives you up the wall.”

Variability has also been picked up through their use of normalised difference vegetation index (NDVI) satellite imagery, which shows crop biomass production and can be used as a crop health indicator.

The Pearlmans’ rotation is usually wheat/barley/chickpeas/sorghum, but is increasingly moving to include more imidazolinone-tolerant barley as a disease management tool. “It is fairly cheap to grow and also provides important ground cover.” 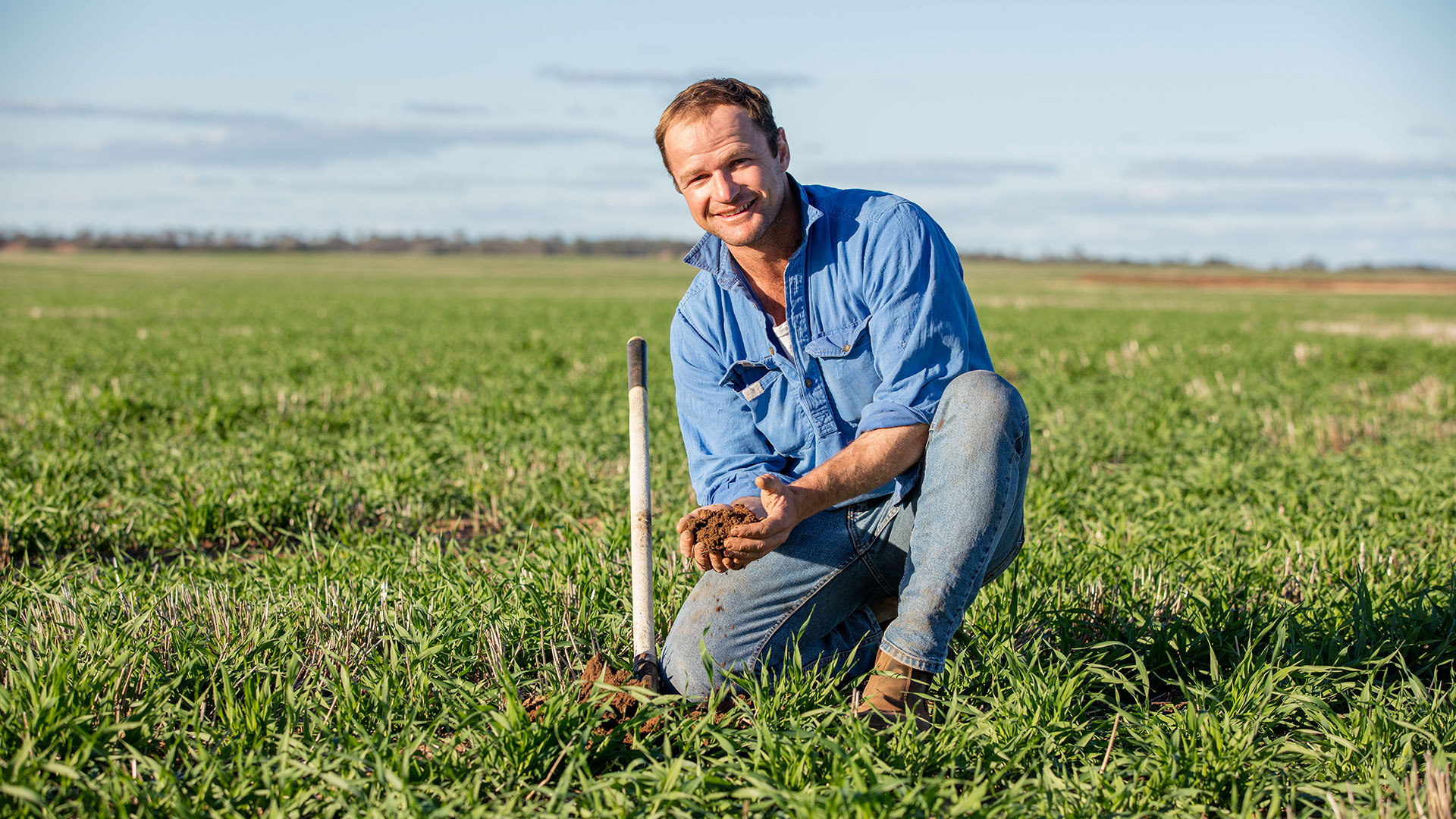 The family has also moved away from running breeding cattle and addressed compaction on previously grazed country with a deep ripper. That success has led them to purchase their own TTQ ripper, which will be used to deep rip and deeply place monoammonium phosphate fertiliser.

This is different to the research-led ripping, which will add ameliorants with the aim of removing soil constraints. Jack anticipates that the intensive work will only need to occur on about 20 per cent of one 800ha farm.

For Jack, the soil work is about getting the most from the farm, a point Professor Bennett is keen to highlight. He says a cultural change may be needed to better manage soils. “We need to change the narrative around soil science and the data we will use to manage it.

“We have to improve the land we have. Genetics and plant breeders have done so much to improve yields, but we need to address soil constraints on land we already use. We can’t keep buying more land.”

He says the work is showing that there are more soil constraints than previously thought. “Soils have a natural variable capacity. So, we need to ask, what can we do to manage that? Our job is to identify the ‘do-nothing’ thresholds and future opportunities.”

Dr John Rochecouste, GRDC soils, agronomy and nutrition manager (north), says the project is ambitious. “The difference with this research is we want to understand if it is possible to make permanent or long-term improvements to correct compaction and sodic or dispersive soils,” he says.

“Once we understand what is needed to overcome these constraints permanently, we can develop economic tools to accurately assess the whole-of-farm business impact. This economic analysis will consider soil amelioration costs and yield gains, as well as the overall improved productivity of the land, so growers – and, importantly, their financiers – can then evaluate soil amelioration as a capital investment on-farm.”