An innovative form of computer modelling known as discrete element method (DEM) is providing an opportunity to simulate machine setting scenarios to develop a performance index for soil amelioration equipment.

A range of tillage equipment is used to ameliorate problematic soils, including mouldboard ploughs, two-way disc ploughs and rotary spaders. Their efficacy in mixing soils is tested in field trials but optimising performance can be expensive and limited in terms of the number of scenarios that can be assessed.

He is completing a GRDC-supported research fellowship investigating the operation of rotary spaders using DEM to see how mixing uniformity is controlled and affects crop responses to different amendments.

He is teaming with Dr Jack Desbiolles and Dr Chris Saunders at the Agricultural Machinery Research and Design Centre at the University of South Australia. Their work also benefits from a close collaboration with Dr Lynne Macdonald (CSIRO) and Trengove Consulting (Bute, SA).

“DEM is a cutting-edge technology that can be used to model the operations of most agricultural machines. In our case, this significantly helped us fully understand the processes involved in how a tillage machine affects the soil profile and how we can improve its performance to address specific soil constraints,” Dr Ucgul says.

His research is twofold: examining whether crop yield responses can be improved by optimising the mixing of lime in acidic soils, and the incorporation of animal manure in soils with poor organic matter content.

Field trials over two years investigated both components and were then complemented with DEM simulations.

“However, spading in the lime treatments increased crop vigour by up to 52.7 per cent in year two, relative to the control,” Dr Ucgul says. 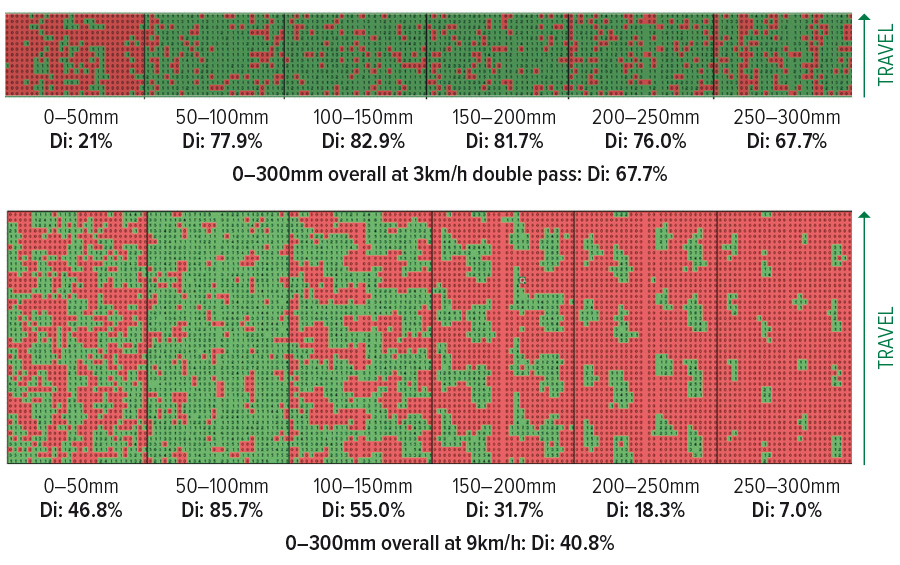 In year one of the experiment, barley grain yield increased by 0.37t/ha or 8.7 per cent over the control when lime was incorporated by spading, but only in high uniformity mixing treatment. This benefit was also maintained in year two when lentil was grown, with 37 per cent greater biomass in the high uniformity treatment. Grain yield responses were not statistically significant, presumably due to harvest losses.

“The data to date indicates that lime should be incorporated through the profile and mixed thoroughly for the most rapid crop response.”

DEM simulations were run to quantify the extent and uniformity of amendment mixing under various soil and machine scenarios. A mixing index (Di) was developed to quantify the level of mixing. The objective is to provide an accurate basis for comparing treatments and correlate these with crop responses.

A series of simulation results show what happens when lime particles placed on the soil surface are mixed through at zero to 300-millimetre depths with 50mm resolution (Figure 1). The percentage of the spaded soil volume that contains some lime (Di value in Figure 1) ranged between less than 10 per cent at depth to greater than 80 per cent in shallow layers.