Soil researchers in Western Australia are looking eastwards to investigate practices where substantial yield increases and improvements in soil structure have been achieved by placing composted manures deep in sodic clays.

However, results from GRDC-invested trials with the Department of Primary Industries and Regional Development (DPIRD) in WA show responses to a variety of amendments depend on seasonal rainfall and soil type. It is also a challenge to separate the soil structural improvement effect from the increase in additional nutrition provided by the amendment.

As a result of the reduced water infiltration and drainage, salts in rainfall accumulate within the root zone, resulting in transient salinity which further reduces PAW by increasing the soil's osmotic potential. Sodicity and transient salinity occur together with their impact on crop growth most evident in dry seasons, which are becoming more frequent as rainfall trends lower across WA's eastern wheatbelt.

Previous research on alkaline clays has concentrated on deep ripping to fracture the soil to aid water infiltration, root growth and drainage and stabilise the clays with gypsum. The responses to these treatments have been, at best, variable and in most cases short-lived in these soils.

The question being asked now is: apart from gypsum, what other amendments could be used to improve water infiltration and storage in these soils? Further, can zones be created for these amendments to allow roots to develop deeper into the soil profile when they are incorporated to depths greater than 40 centimetres?

Improved root growth in a trenched slot with amendments at the Ongerup site in 2017. Photo: DPIRD

Trials at Ongerup, Lake Grace and Nangeenan were used to assess the deep placement of various amendments and their combinations. The deep placement was done using either an auger trencher or a 'ditch witch' that created trenches about 10cm wide and more than 40cm deep. 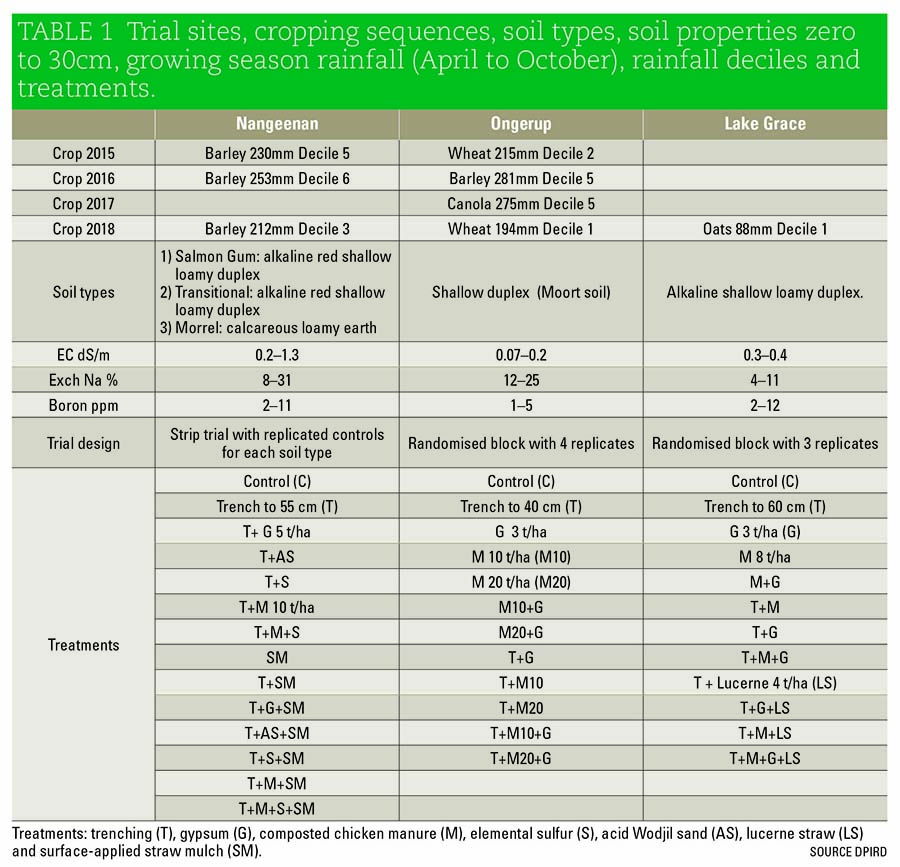 The trenches of sodic soil mixed with amendments were spaced 90cm apart within each plot, resulting in four parallel trenches per plot.

Fertiliser was applied to all treatments at seeding to achieve average to above-average yields at each site.

At Nangeenan, grain yield decreased in Morrell less than in Salmon Gums soils, which was, in turn, less than transitional soils. The Morrell soils generally had the highest salinity and sodicity levels and equal-highest boron levels.

The straw mulch increased crop yields by almost 50 per cent on the Morrell soils but had no effect on the Salmon Gums and transitional soil types. It is likely that mulch was able to reduce evaporation and maintain higher moisture content near the soil surface for longer where crop roots are restricted by sodicity, transient salinity and boron.

Zones of lower soil strength could be created through trenching in deep sodic Western Australian soil and generally they have increased grain yields, but the effect appears to be dependent on soil type and location. - DPIRD researcher David Hall

Trenching had a small but significant effect on increasing crop yields at the Nangeenan site. The trenched treatments increased crop yields by 10 per cent when averaged over all years and soil types. Trenching with amendments often resulted in higher early season growth but rarely was this converted into grain yield, due to lack of finishing moisture.

For instance, in 2016 the trenched chicken manure treatments (T+M, T+M+S) had significantly higher early season growth as measured by normalised difference vegetation index (NDVI). However, there was no increase in yield, while screenings and proteins were higher than the other treatments. This suggests that the increased early season biomass growth was not converted into grain yield.

The metering-out of resources to prevent 'boom-bust' scenarios in dry environments is a challenge. The acid Wodjil sand (AS) and gypsum (G) treatments resulted in minor but not significant improvements in crop production (Table 3).

Elemental sulfur had a large impact on reducing soil pH from 8.0 to 5.0 in the zero to 10cm layer of the Morrel soil. In the less-alkaline Salmon Gums soil, the same amount of sulfur reduced the pH from 7.5 to 3.6.

Yield reductions in the Salmon Gums and transitional T+S treatments are attributed to the large decline in soil pH. Laboratory experiments have shown that acidifying the Morrell soils will reduce clay dispersion; however, further research is being done to better define rates of sulfur application in alkaline soils with differing initial pHs.

Figure 1: Changes in soil (a) sulphur and (b) pH as a result of the control (C), trenching (T), elemental sulphur (S) and composted chicken litter (M) on a Morrel soil at Nangeenan. Source: DPIRD 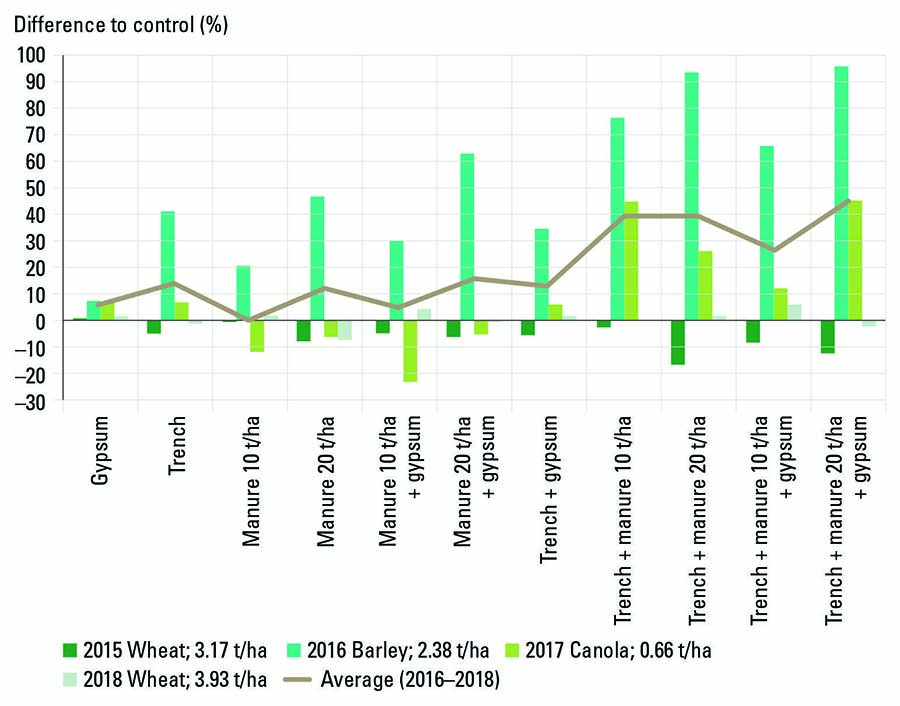 Figure: 2 Percentage difference in grain yield between the manure, gypsum and trenched treatments at Ongerup between 2015 and 2018. Source: DPIRD

Over multiple years the 'trench plus manure' treatments have demonstrated the capacity to generate higher yields that would take advantage of good seasonal conditions, such as high seed and tiller numbers. Yield potential could not be realised in all years due to adverse environmental conditions including frost and low rainfall.

However, even with these environmental stresses, the yields obtained from trenching or manure addition resulted in the highest or equal-highest yields. Increased early season growth in the manure and trench amended treatments did not always result in higher grain yields. NDVI, biomass at anthesis, grain yields and grain weight all indicate that the manure and trench amended treatments were unable to convert the additional biomass into grain due to lack of finishing moisture.

In 2018 this resulted in a 'boom' of early season growth which, if not followed by rainfall at the end of the season, results in a 'bust' scenario with crops prematurely haying off. There was no effect of gypsum at this site.

The Lake Grace site had a history of gypsum application. The crop yields at this site were at their rainfall-limited yield potential, ranging from 2.7 to 3.4t/ha (Figure 3). This is exceptional given that the growing season and annual rainfall for the site were 88 millimetres and 157mm (Decile 1) respectively. No effects of trenching were found at the Lake Grace site in the initial year of the trial, despite having fewer plants establishing.

Composted chicken manure (M) resulted in increased yields (14 per cent), regardless of whether it was surface-spread or deep-incorporated (Figure 3). The deep incorporation of gypsum and lucerne straw had no effect on crop production in 2018. The benefits from the deep placement of amendments occurred mainly in higher-rainfall seasons in the absence of frost. In low-rainfall seasons, deep-placed amendments often produced improved early season biomass (boom) but resulted in no increase in grain yield (bust).

Zones of lower soil strength could be created through trenching and generally increased grain yields but appeared to be dependent on soil type and location.

The effect of the composted chicken manure main treatment resulted in higher yields at one site regardless of whether it was incorporated or surface-spread, but this was not consisted across sites, again indicating the response to be site-specific. This suggests that the yield improvement was mainly due to improved nutrition.

Sodicity, boron toxicity and transient salinity are associated with alkaline loam and clay textured soils that occupy about 2.5 million hectares within the WA wheatbelt.

At Nangeenan, the manure treatment increased early season growth but did not result in higher grain yields. This lack of conversion from dry matter to yield is most likely related to insufficient water from anthesis to grain fill. Separating the improved nutrition from improved soil physical properties as a result of the manure application was difficult to achieve in these experiments.

Gypsum did not significantly increase yields at any of the sites. At Ongerup and Lake Grace, there had been a history of gypsum application by the grower prior to the trials being established. The higher salinity levels at Nangeenan would have reduced clay dispersion and therefore the effectiveness of gypsum.