Ben Biddulph with a weather station at the extensive NFI site in Dale.
Photo: DPIRD

Results from trials across the southern and western regions of Australia have reassured growers that crop input decisions should be made to optimise production – debunking a long-held theory in some growing regions that later-season nitrogen applications can make a wheat crop more susceptible to reproductive frost damage.

Dr Biddulph says data from the study showed maturity differences between varieties were much more significant in terms of reproductive frost responses than the impact of nitrogen inputs and plant densities.

“The key message for growers from this three-year study is plant density and nitrogen rate decisions should be considered for local yield potential, but they should not be considered as exacerbating frost risk,” he says.

In frost-prone areas, growers should continue to sow longer-maturity varieties of all crop types and maintain high seeding rates and standard nitrogen inputs to optimise yield potential and profitability.

Dr Biddulph says there had been some speculation that later-season nitrogen applications could “soften” the crop, meaning it was more susceptible to frost effects at higher temperatures than those crops without this later-season application.

“Our research tested this theory extensively, but found no evidence to support it,” he says.

“If a wheat crop is severely frosted it is unlikely that plant density or nitrogen management has contributed significantly to this outcome – it is more likely due to a combination of variety by sowing date and subsequent alignment of susceptible reproductive stages to frost events.”

Further, he says, growers have reported that applying nitrogen after tillering appears to increase frost damage in years of high yield potential in frost-prone areas, possibly due to increased canopy cover and more synchronisation of canopy development.

“Some of the farm-scale trial data did show that there was a statistically significant increase in frost severity and duration with higher seeding rates and added nitrogen, but this was not large enough to relate to differences in frost damage or any subsequent yield impact.”

As a result of these commonly held beliefs about nitrogen application and canopy management, he says, some growers may have adopted conservative nitrogen strategies in frost-prone areas to reduce canopy cover and lower frost risk.

“While there may be financial reasons for managing inputs applied to a site with long-term frost-affected yield potential to reduce financial risk, it does not actually reduce frost damage.

“In the trials run in frost-prone landscapes, maintaining the normal grower practice of seeding rate and nitrogen for local yield potential gave the greatest financial return without frost, some financial advantage with moderate frost and, most importantly, was never worse off with severe frost.” 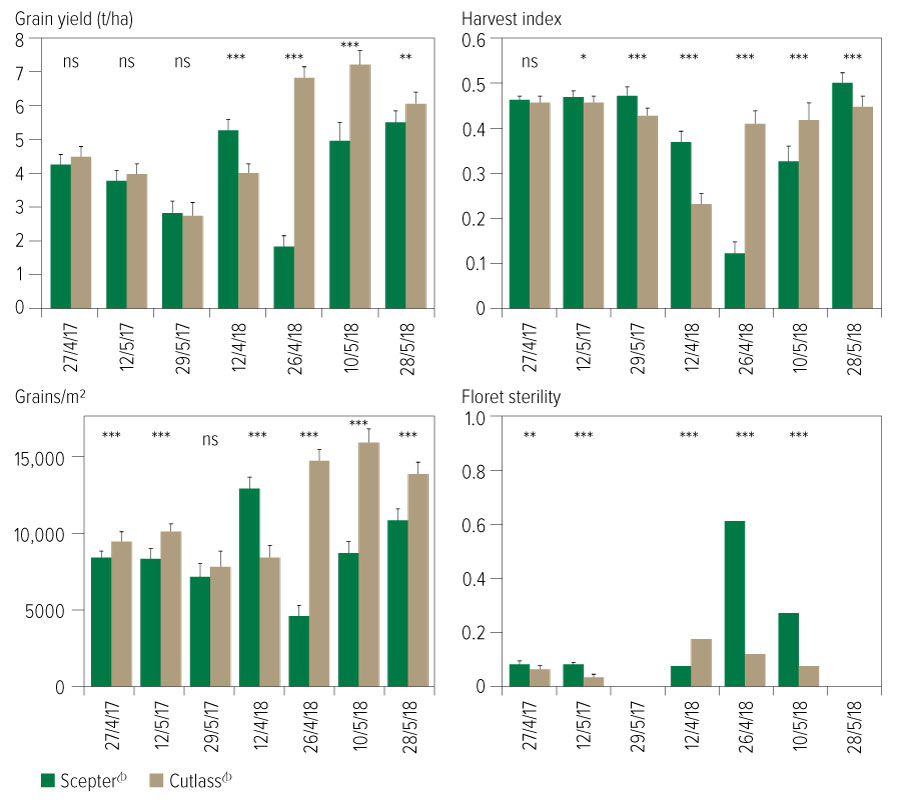 In rice crops, increased nitrogen applications have been shown to interact with low temperatures (not freezing), resulting in increased sterility and yield loss.

But Dr Biddulph says this response has not been seen in research on wheat crops.

Replicated trials at Dale (WA), Yarrawonga (Victoria) and Condobolin (NSW) compared sowing time, spring varieties with a spread of maturity types, and post-seeding nitrogen applications. These DPIRD-managed trials were run in collaboration with the Foundation for Arable Research (FAR) and the NSW Department of Primary Industries.

Sowing times were spread from mid-April through until early June.

“Across all sites, seasons and sowing windows, sowing time and variety maturity contributed the majority of variance where trials were frosted, meaning that maturity selection remains the most influential decision for frost risk,” Dr Biddulph says.

The large-plot trials considered the impact of nitrogen applications and plant density in frost-prone parts of the landscape on changes in frost severity and duration.

For each trial, a flat, uniform and nitrogen-responsive site (mostly canola stubble) was sown as close to the break of the season as possible (mostly early May) and managed according to local grower practices.

Each trial had two seeding rates and three nitrogen rates.

The three nitrogen treatments were:

Throughout the reproductive crop sensitivity window, an increase in the duration of the frost of about two hours was observed for those treatments with the highest seeding rate and highest nitrogen rate, which was not enough to change frost damage.

This compares to treatments with stubble retention, where the duration of the frost window increased by 10 to 20 hours throughout the entire window of plant reproductive sensitivity.

In fact, in moderately frosted crops, there appeared to be a small positive response in yield and gross margin as a result of the nitrogen application at some sites and seasons.

Dr Biddulph says the work in these large-plot trials reaffirms the message from the small-plot trials that seeding rates and nitrogen applications, calculated for local yield potential, will give the greatest financial return without frost, some financial advantage with moderate frost and, most importantly, no negative financial impact with severe frost.

“Managing plant density and nitrogen within good variety and sowing-time decisions will reduce the likelihood of excessive losses to frost and maximise yield and profit with or without frost damage,” he says.