Developing solutions to complex production stresses that affect the grains industry requires resources – both intellectual and infrastructure – and time to build and test the knowledge.

Abiotic stresses such as drought, waterlogging, extreme temperatures (cold, frost and heat), salinity and mineral toxicity negatively affect growth, development, yield and grain quality of crops. For wheat alone, it is estimated that frost causes losses to the Australian grains industry of at least $400 million per year.

For many years GRDC, in conjunction with many state-based departments of agriculture and universities, has invested in research to better understand the effects of frost on grain crops and to develop management solutions for growers in frost-prone areas; however, given the highly-variable nature of frost events, it is a challenging and time-consuming endeavour.

For Brenton Leske, who hails from a farming family based in Cascade, 650 kilometres south-east of Perth, the reality of the effects of frost on cropping enterprises is hitting home as he is seeing more-regular frosts affecting his family business.

However, rather than pursuing a career on the farm, Mr Leske is exploring other ways in which he can support growers in managing frost. His career, so far, is an example of combined industry investment in capacity building and the benefit of being imbedded in an established research program with purpose-built infrastructure.

As an undergraduate in 2013 at the University of Western Australia (UWA), Mr Leske’s honours research was supported by GRDC. Supervised by Dr Ken Flower and James Easton, his honours project aimed to determine whether the composition of fertilisers can improve wheat root and shoot growth in the acidic Wodjil soils in Western Australia. He gained fundamental plant physiology skills as well as generic research skills such as time management and self-motivation through this training.

“My research project was also supported by CSBP and the Grower Group Alliance. These linkages enabled me to undertake an industry relevant project and start building a professional network,” Mr Leske says.

Upon graduation in 2014, Mr Leske gained one of a few graduate positions with the Department of Primary Industries and Regional Development (DPIRD) and was embedded in the GRDC-supported four-year National Frost Initiative (NFI) working with Dr Ben Biddulph, DPIRD.

This position gave me insight into a high-priority constraint on Australian grain production and access to the national intellectual pool of experience that was focused on the constraint.

He was encouraged to pursue a PhD in an area of identified need for frost research and in 2017 started full-time on this further study, supervised by Professor Tim Colmer of UWA and Dr Ben Biddulph. Mr Leske received a stipend as part of his Grains R&D Postgraduate Scholarship from DPIRD for four years and a top-up scholarship from GRDC through a Grains Industry Research Scholarship for three years, both from 1 July 2017.

“From the wheat and barley variety screening work that DPIRD was doing in conjunction with the University of Adelaide, various gaps were identified. The first was the need to reliably ‘control’ the effects of frost in the field to have a benchmark to compare frost damage,” he says.

“The second was to determine yield under frost and to relate the factor being screened for – frost-induced floret sterility – with yield loss. This required detailed physiological dissection.”

“The result is that various assumptions are then made by modellers when they develop frost damage functions used to inform sowing decisions,” Mr Leske says.

In 2016, DPIRD established a permanent frost nursery, hosted by Bill and Anne Cleland at Dale, WA, and managed by Living Farm. The site had a dam installed, which has enabled trials to be irrigated to establish early sowing. It also has a mobile field laboratory, weather stations and a mobile phone booster station to ensure all data is relayed to Perth on a regular and secure basis.

“This is a unique resource that has enabled the research team to make large gains in the development of frost knowledge – and it was at this site that my PhD work was based,” Mr Leske says.

Previous research to establish control measures to exclude frost from trials had used methods such as field-based heat tents, or portable polyethylene chambers.

“These pose problems through shading and reducing radiation interception, resulting in experimental artifacts. Unless the addition and removal of the covers are automated, they require active management. An effective field frost exclusion method needs to prevent frost damage while not impacting growing microclimate or yield, and be automatic (particularly when the research trials are located some distance away from the researcher), modular, mobile and affordable.” 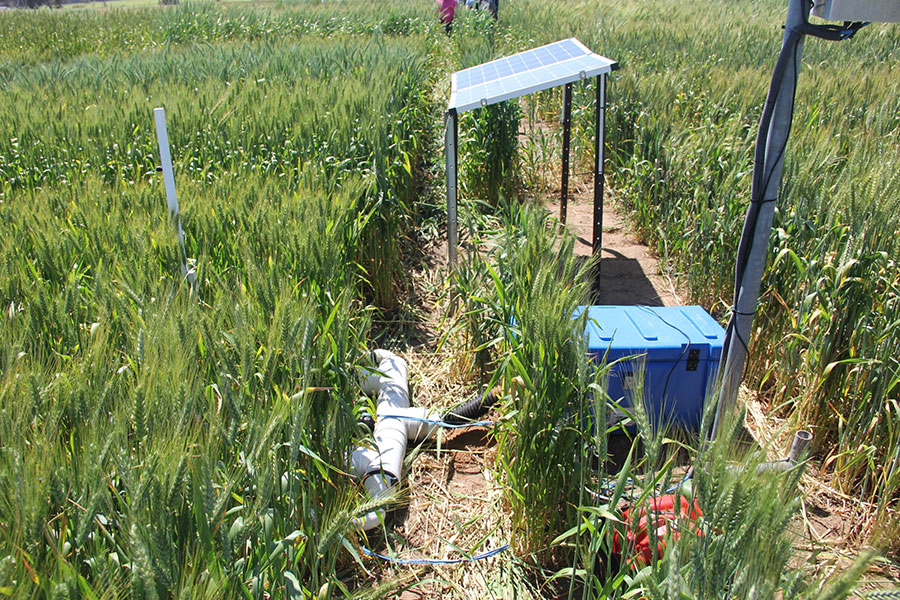 Mr Leske used a diesel heater method of control prototyped by Dr Bonny Stutsel as part of her NFI-supported PhD studies, also at UWA, and determined that it was a reliable means of providing a frost-free control in his field studies. It was then used as the control method for further studies within his PhD.

The development of a reliable frost control method enabled Mr Leske to further describe the type of low temperature damage incurred by wheat. He found that the combination of cold (5°C to 8°C) and chilling damage (zero to 5°C) contributed 20 to 30 per cent of floret sterility (half of floret sterility present).

A major part of Mr Leske’s PhD studies was devoted to examining how the structural aspects of wheat spikes may predispose wheat to frost damage. He spent hours painstakingly dissecting wheat spikes affected by varying degrees of frost to examine these components.

“Frost inflicts damage on grain crops by sterilising the reproductive tissues within the developing florets, but I needed to determine how frost was interacting with the structure of wheat spikes to really get a handle on the particular components involved,” Mr Leske says.

The length of the awns at the upper and lower parts of the spike was positively associated with floret sterility when spikes were exposed to frost – that is, longer awns increased frost damage.

“Outer grains, those in the outer florets, in the wheat spikes were found to be key determinants of grain yield when exposed to frost, but distal grains can play a minor role in compensation.”

Mr Leske also found significant variation in these traits across the three varieties that he studied. Wyalkatchem (PBR), a known frost-susceptible variety, suffered significant yield loss compared to less-susceptible Scout and Cutlass . Wyalkatchempreferred to direct more resources to growing heavier grains in the outer florets and putting fewer resources into grains in the inner florets. In contrast, Scout and Cutlass spread their resources across both outer and inner florets, creating a spread of grains throughout the spike (Figure 1).

Figure 1. The relative contribution of spikelet grain position (G1 to G4) to spike grain weight in three wheat cultivars: Cutlass (PBR), Scout (PBR) and Wyalkatchem (PBR), sown in mid-April (17/04/2019) (a), early May (01/05/2019) (c) and mid-May (17/05/2019) (e). Absolute spike grain weights for the same sowing dates are shown in (b), (d) and (f) with significance (p < 0.05) noted by letters with each sowing date compared separately. Relative contributions are calculated from the predicted mean of absolute spike grain weight (n=45 spikes per data column). Floret Sterility (FS) of G1 and G2 is shown at the top of each graph.

There was a negative relationship between the sterility of both proximal (G1 and G2) and distal (G3 and G4) grains to grain yield.

“The contribution of grain position to spike weight and ultimately grain yield was made up by G1 and G2, 70 to 80 per cent, followed by G3, 12 to 18 per cent and then G4 with between seven and 17 per cent,” Mr Leske says.

“Contributions by each grain position varied with sowing date and floret sterility level. Under low floret sterility the weight of grain in proximal positions G1 and G2 contributed more than 70 per cent to the total spike grain weight.

Therefore, measurement of frost damage in proximal florets is sufficient for determining the level of frost damage within a crop and using this to determine if the crop should be cut for hay or left to harvest the grain.

Mr Leske says this knowledge, together with technology advance, could provide opportunities for breeding and selecting varieties less susceptible to frost.

“At the core of our frost research is the motivation to help growers with their crop management decisions to manage the risk of frost. Part of those decisions can include considering the economics of salvage options when damaging frost(s) occur,” Mr Leske says.

Once a crop is frosted, there is a difficult decision as to whether to take the crop through to grain or to cut for hay and this can be very dependent on the market opportunities at the time and the structure of the farm business for hay making.

To explore this management question, Mr Leske undertook some economic modelling scenarios using the 2018 and 2019 seasons as examples (Figure 2).

“These show the gross income differences of taking 15 wheat varieties of different maturities, sown from mid-April to late-May, through to grain compared to cutting for hay at various levels of frost damage.”

As can be seen in Figure 2, as the average level of damage increases, the more economical is the decision to cut for hay, but this depends on the prevailing hay market, access to hay-making equipment, labour and the transport distance to the market.

“Consultants have access to calculators to help make these decisions and growers are encouraged to seek this sort of assistance when it comes to making a challenging decision to salvage a frosted crop,” Mr Leske says.

Read more: How well does assessment of outer florets of a wheat head following frost(s) relate to grain yield at the end of the season?

For practical advice on managing frost.