The use of chaff lining and chaff tramlining for harvest weed seed control (HWSC) has increased dramatically over the past five years, as both are relatively cheap and easy options to implement.

Unlike burning or baling, the advantage of these systems is that they allow retention of the straw residue to maintain ground cover and that no after-harvest operations are required for chaff-line management.

Yet despite these systems being used by Australian growers for more than a decade, their influence on weed seed survival has not been investigated.

Recent GRDC investment in the northern region has enabled the University of Sydney, Charles Sturt University and the Queensland Department of Agriculture and Fisheries to look at the impact of chaff on weed seed survival over the summer-autumn period.

In a series of field trials at Wagga Wagga, Narrabri and Toowoomba, weed seeds in mesh packets were placed under or adjacent to chaff lines at harvest, then collected just prior to crop planting the following autumn.

Surprisingly, when the seed was collected there was little or no difference between the survival of weed seeds placed beneath the chaff windrows and the seed placed beside the windrows (see Table 1). The differences in the type and amount of chaff had little or no impact on the survival of weed seed present under chaff windrows.

This means that, in most cases, the presence of chaff does not lead to large reductions in weed seed survival.

Instead, the observed differences in seed survival were more dependent on location (paddock environment), rather than chaff type and amount, with differences between sites of more than 80 per cent for some weed species. 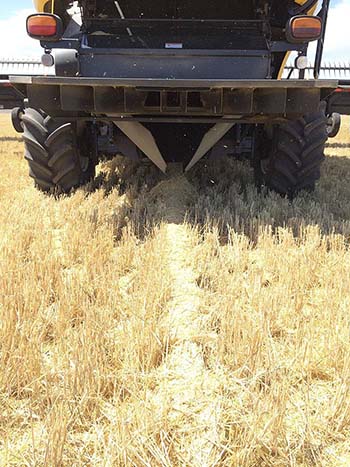 Annual ryegrass seed survival was generally lower at the Toowoomba sites, where it averaged 30 per cent - compared to approximately 80 per cent at the Narrabri and Wagga Wagga sites.

However, the location effect on seed survival was not consistent for all species. Wild oat seed survival was generally lower at all sites - averaging 36 per cent - but substantially higher (91 per cent) at one of the Toowoomba sites.

Summer rainfall and seed predation are the factors most likely responsible for differences in weed seed survival between sites.

Total rainfall from December to April varied markedly between sites, with:

Higher rainfall levels will increase microbial damage to seed, particularly in more fertile soils such as those at the Toowoomba site.

There was very little variation in the average daily temperatures at Toowoomba (22°C), Wagga Wagga (23°C) and Narrabri (26°C).

Surprisingly, there was little or no difference between the survival of weed seeds placed beneath the chaff windrows and the seed placed beside the windrows. - University of Sydney Associate Professor Michael Walsh

Weed seed loss due to predation was clearly evident at the Toowoomba sites - and when there were very low levels of chaff material, predation was similarly high on seed beside or beneath the chaff.

The exception was for wild oats, where there was no predation over summer-autumn.

While concentrating weed seeds into chaff lines and chaff tramlines at harvest does not reduce their viability before sowing, it does make it easier to monitor and manage emerging seedlings in a targeted and more efficient manner - such as using high label rates with a shielded sprayer.

For more information on the research findings, download a copy of the GRDC Update paper Impact of chaff lining and chaff tramlining on survival of weed seeds from the resources and publications section of the GRDC website.