Novel research is examining the performance of virtual fencing technology as a farm automation tool that uses livestock grazing for targeted weed control and to minimise grazing impacts on grain crops, ground cover and erosion-prone areas. Dr Llewellyn, who is based at CSIRO’s Waite Campus in Adelaide, says the technology has attracted enormous interest from mixed farmers, particularly those seeking to better manage grazing and ground cover across increasingly large cropping paddocks.

“One of the attractions for growers is the potential for targeted grazing to more effectively manage weed populations in mixed-farming rotations,” Dr Llewellyn says.

“Animals receive audio cues via a neckband device that indicates where the virtual fenceline is positioned,” he says.

“To train the animals, a mild pulse is also administered if the animals ignore the initial audio cue and continue to move towards the virtual fence.

“It is remarkable how quickly the animals learn to respond to the audio cue alone.”

The paddock set up for this technology, which is linked to a satellite base station, cloud-based data storage and an app (web and tablet), is being commercialised by Melbourne-based agricultural tech company Agersens using patents developed at CSIRO.

CSIRO scientists are also in the early stages of developing a prototype that adapts the virtual fencing technology to sheep using an eartag device, instead of the neckband device fitted to cattle.

Neckbands were found be unviable for sheep due to the insulating properties of wool and its growth rate.

To test the efficacy of these systems for both cattle and sheep, five trials are planned on mixed farms across South Australia as part of the three-year project before it concludes in 2022.

The first of these trials, which ran from October to November last year, examined the effects of ‘zonal grazing’ cattle on a grower’s property at Long Plains, north of Adelaide, using Agersens’ eShepherd® livestock management system.

The CSIRO research team monitored the impacts of the system on weed populations and ground cover where 40 head of cattle grazed paddocks of vetch after it was cut for hay. Regrowth of the vetch and weeds including ryegrass and sow thistle was substantial following significant rainfall. “The eShepherd® technology performed well and effectively fully contained the young cattle in the paddock zones established by the three fenceline shifts,” he says.

“The ability to strip-graze, targeting particular weedy areas of a paddock, is a potential benefit of virtual fencing that could see farmers increase grazing pressure to reduce weed seed set and also manage ground cover in fragile areas."

“Preliminary results from the trial show strip-grazing using virtual fencing more than halved the amount of ryegrass seed heads compared to the paddock grazed without virtual fencing, and there was no significant difference in cattle live weight gain over the two-week trial.”

The CSIRO team will also examine weed populations and crop performance when the grazed vetch paddocks are sown to wheat next year.

Another trial planned in autumn aims to examine the effectiveness of virtual fencing for managing early season zonal grazing of cattle in a dual-purpose cereal crop to optimise ground cover, weed control and crop yield potential.

“Following the cattle trials, the project’s on-farm trial program will study the potential for virtual fencing to be applied to targeted sheep grazing for winter and summer weed control,” Dr Llewellyn says. 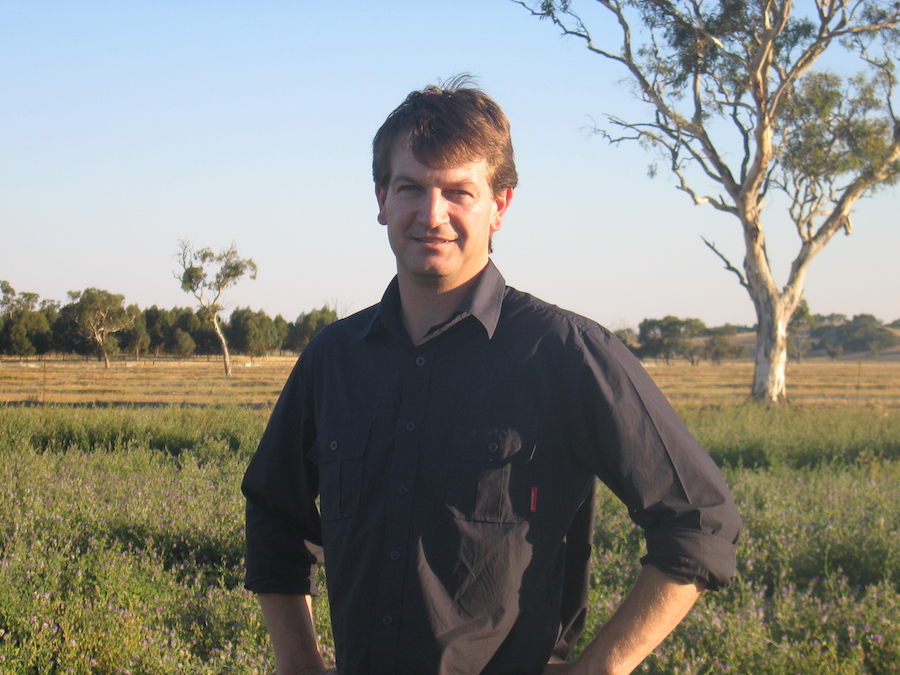 The on-farm trial tested the performance of a pre-commercial version of the eShepherd® virtual fencing livestock management system developed by agricultural tech company Agersens in a 14-hectare lucerne paddock in May last year.

Beef cattle were trained to graze the paddock within virtually fenced boundaries with audio and electrical cues administered by automated GPS-enabled neckbands fitted to the livestock as part of the eShepherd® system.

“The trial successfully protected a watercourse area containing eucalyptus saplings from being grazed on a commercial farm.”

To achieve this result, the CSIRO research team applied the prototype neckband devices to 20 Santa Gertrudis heifers for the 44-day trial. The system was then applied to establish a contoured virtual fenceline in the paddock to prevent the cattle from grazing the watercourse area.

Dr Llewellyn says it was one of the first virtual fencing trials showing animals can be trained quickly to respond to a contoured virtual fenceline. Cattle were quickly trained to respond to a contoured virtual fenceline in a paddock trial on a farm at Eden Valley, South Australia. Photo: CSIRO

This contoured approach could allow farmers to virtually fence different soil types for zonal or strip-grazing in paddocks, he says.

“The cattle were prevented from grazing the exclusion zone containing the saplings for 99.8 per cent of the trial period.”

CSIRO scientists also mapped and analysed the availability and quality of pasture feed in paddock areas where virtual fencing was used to manage cattle grazing (inclusion zone) compared with areas where grazing was excluded (exclusion zone).

“So towards the end of the 44-day trial period, there was plenty of incentive for the animals to try to cross the virtually fenced boundaries.”

For instance, the technology might be used to exclude livestock from waterlogged or fragile soils, reduce overgrazing and erosion, and maintain optimal ground cover.