Tactics for feathertop Rhodes grass management outlined in the north

Tactics for feathertop Rhodes grass management outlined in the north

Many growers have completed their first control spray using a glyphosate-based application, and are now expressing concern about how to deal with survivors.

"While it is not surprising that these naturally tolerant and/or resistant weeds have survived the initial glyphosate treatment, there had been some talk that the prolonged dry may have resulted in significant depletion of the seedbed - especially that of FTR," Mrs Green says.

"It would appear that seed survival and spread during the drought has been greater than expected, and so growers are now looking for options to control what are, in many cases, large survivors."

Mrs Green says, ideally, growers should only apply Group A herbicides to small weeds in order for them to work reliably.

She says if there are situations where growers need to clean up a glyphosate 'failure', then it is highly recommend to not use Group As on large weeds.

"If growers try to use high rates of a Group A herbicide to control escapes, they are likely to end up with more failures than successes - as well as possible plantback issues," she says.

Scenario 1: What can growers do if they have already used a first spray of glyphosate and have survivors/resistant FTR or BYG?

Mr Congreve's advice: Most likely this will require cultivation, before the plants set seed. If there is only the odd plant, match the strategy to the size of the problem and get out the chip hoe.

There is no legal herbicide option that is going to work reliably on large FTR or glyphosate resistant BYG that has survived a glyphosate spray (this includes any double knock options).

Added to this, there are serious supply issues with almost all fallow knockdown herbicides, so Mr Congreve recommends keeping these herbicides for the next flush of small weeds, where they were most likely to be effective.

Following a successful cultivation to remove existing weeds, growers have several options, he says, including:

Mr Congreve says where growers were not prepared to cultivate, it may be possible to 'slow down' the escapees by applying the maximum registered rate of paraquat as a medium/coarse spray quality with water rates of 100 litres per hectare or more - depending on the weed size (thorough coverage is essential, so travel slowly).

"This will not kill large weed escapes, but will probably set them back significantly and stop seed set for a few weeks. This may give more time to allow the cultivation to be completed," he says.

"Multiple applications of paraquat 'may' eventually kill large grasses. If you keep applying it every time, the plant tries to reshoot.

"There is no specific time required for the subsequent application, although it needs to be applied after green shoots are present, and this will depend on rainfall/soil moisture."

Scenario 2: Can growers expect subsequent FTR germinations, or will it all come up with the first rain? 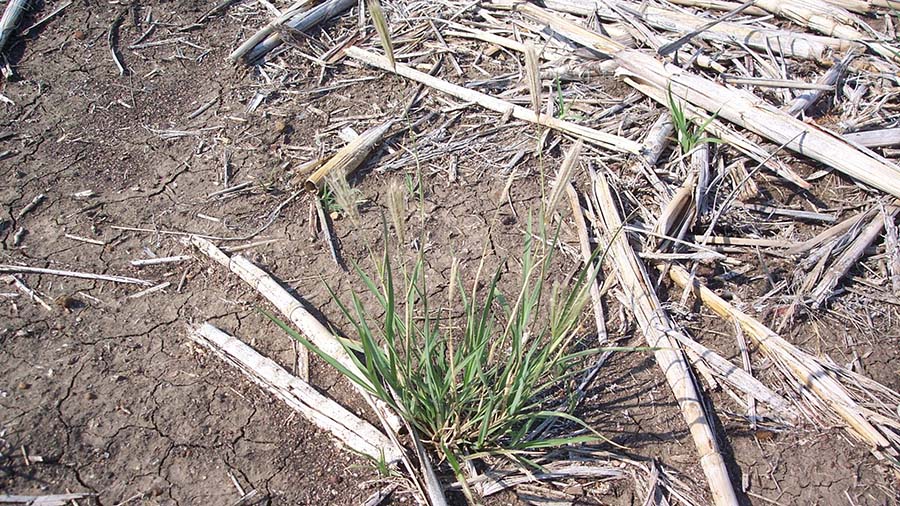 Advice is for growers to ideally only apply Group A herbicides to small feathertop Rhodes grass plants. Another option is cultivation for bigger plants. Photo: Mark Congreve, ICAN

Mr Congreve's advice: It is likely to still be warm enough for FTR to germinate on any follow-up rain during March or April 2020.

"In previous 'wet' summers there has been multiple germinations on rainfall events, so it is possible this will happen this season if wet weather continues - it will depend on seed levels in the soil," he says.

"We have been surprised by the amount of FTR germinating in recent weeks, following a couple of very dry summers. We really are still learning about the behaviour of this weed."

It is a statement supported by Mrs Green.

Mrs Green says feedback from both researchers and growers had reinforced that FTR knowledge and management remained a high priority across both Queensland and NSW.

"To help growers manage FTR, the GRDC has just invested in a new project to further develop industry's understanding of the ecology and management of this weed," Mrs Green says.

"We have already done extensive research into FTR in northern NSW and Queensland, and this new project will focus on extending information to growers via field days, workshops, publications and media.

"In southern NSW, there will be additional trial work to understand FTR behaviour on different soils and within different farming systems, with extension to follow the completion of these trials."

Growers and agronomists will start to see these research activities roll-out from this winter.