Feathertop Rhodes grass is commonly found on roadsides and on vacant land across much of Australia. These weed populations can spread onto farms where they establish along fences, in fallows and within cropping paddocks.
Photo: Nicole Baxter

A weeds management specialist says now is the time to be thinking about taking decisive action to drive down known seedbanks of feathertop Rhodes (FTR) grass.

Mark Congreve, a consultant with Independent Consultants Australia Network (ICAN), says the reminder comes after recent research has confirmed the difficult-to-control weed can establish during late winter or early spring, often before many other ‘summer’ weeds.

“Waiting until FTR plants are larger than 10 centimetres and applying an ineffective product such as glyphosate in the hope of achieving control will not work because most populations are glyphosate-tolerant,” Mr Congreve says.

“In fallow paddocks, successful strategies almost always revolve around applying a residual herbicide before the first late-winter to early spring rain to stop FTR plants from emerging. There are several options, but the choice of product will depend on the plan for the following crop.”

Mr Congreve says seeds move about in dust storms and floodwaters flowing across paddocks, on machinery and on the hides of animals.

“The weed is a poor competitor and, experience shows, seed production is greatly reduced by robust crop competition, especially where crops are grown on narrow row spacings.

“Accordingly, it exploits areas of poor competition found in crops sown on wide rows, such as sorghum, gaps in crops and other bare areas of soil such as fencelines, fallows and roadsides.”

Mr Congreve says the most effective and least costly way to manage FTR is to keep it out of cropping paddocks and off farms.

“Successful management involves a strong commitment to farm hygiene, roadside management of non-crop areas such as fence lines and individual plant removal whenever found,” he says.

“If FTR establishes, developing an integrated weed management plan is the best way to drive down the population of weed seeds in the soil.”

A paddock surrounding a GRDC FTR demonstration site at Moree, New South Wales, provides compelling evidence of just how difficult and expensive successful control of FTR can be when relying on herbicides alone.

Mr Congreve says a common mistake made in managing FTR is allowing plants to establish before acting with herbicides.

“For southern Queensland and northern NSW, this first major germination can often be any rainfall event after the start of August and slightly later for those farming in areas further south,” he says.

“Observations of the paddock around the Moree demonstration site during the past 12 months show that applying a double knock during September, four to five weeks after the germinating rainfall, was not effective.

“FTR produced seed before the sorghum was harvested, which left a heavy FTR seedbank (see Figure 1). By 20 August 2020, the first spring emergence of FTR was observed. 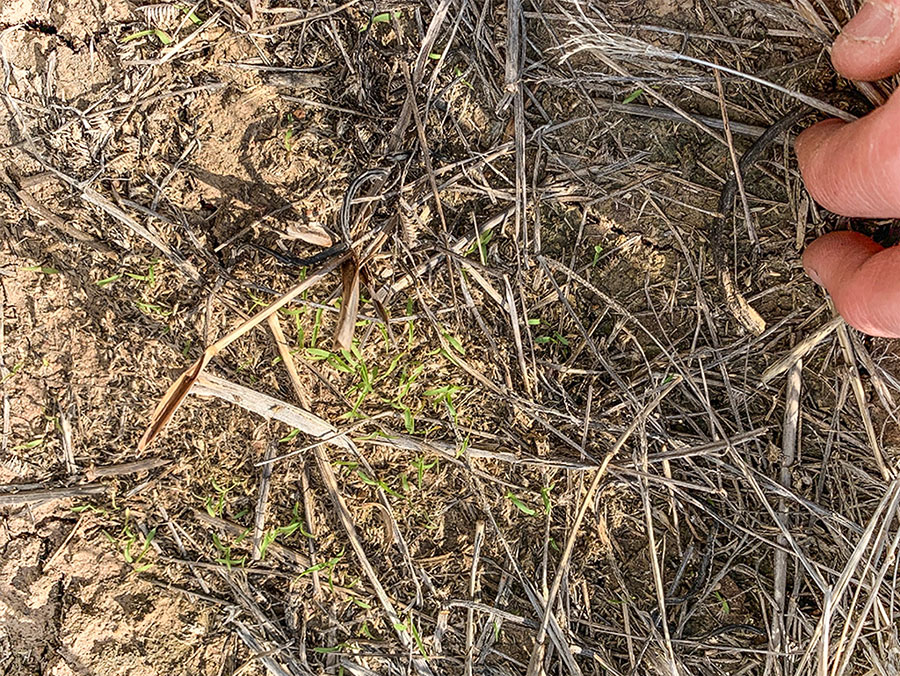 “Four to five weeks after the first FTR germination on 18 September 2020, a double knock application of two litres per hectare of glyphosate plus 500 millilitres/ha of clethodim was applied across the infested area.

“Eleven days later, 2L/ha of paraquat plus 150mL of imazapic was sprayed.”

Inspection of the paddock after spraying, Mr Congreve says, showed the timing of the double knock was too late after emergence, and the time between knocks was longer than the ideal five to seven days, allowing some FTR to survive.

“While the growth of these seedlings appeared to be affected by the broadcast herbicide, several plants were not killed and went on to establish in the fallow,” he says

“The weather remained dry until early December when a WEED-IT® optical sprayer was employed to target the existing established plants with a mixture of 3L of glyphosate plus 1L of propaquizafop (Shogun®) and 34 grams of saflufenacil (Sharpen®) per 100L.

“Another WEED-IT® application of 3L of glyphosate plus 1L of propaquizafop (Shogun®) and 34g of saflufenacil (Sharpen®) was sprayed in late December, again targeting the surviving established plants (see Figure 2).

Figure 2: After the first optical spray. 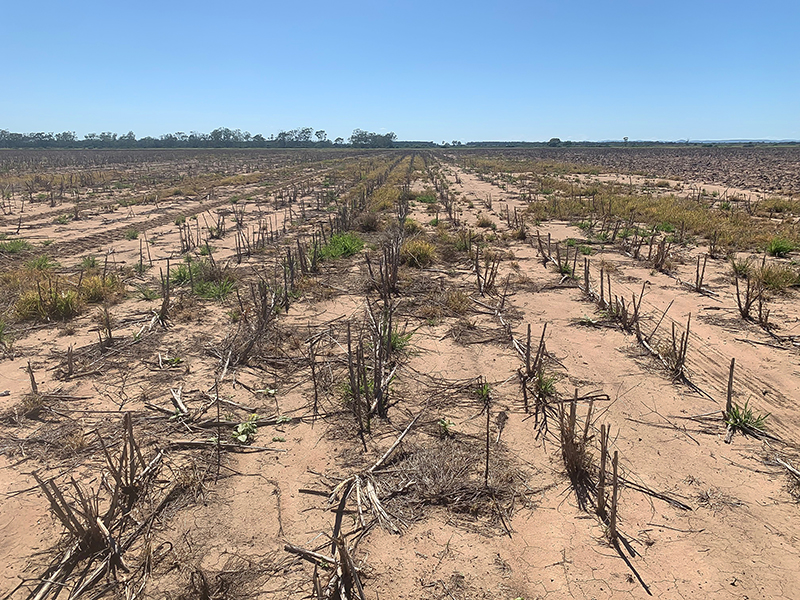 By March, Mr Congreve says patches of FTR still remained following a significant rainfall event, despite two double knocks and four applications of glyphosate plus Group A herbicide via a WEED-IT® (see Figure 3). 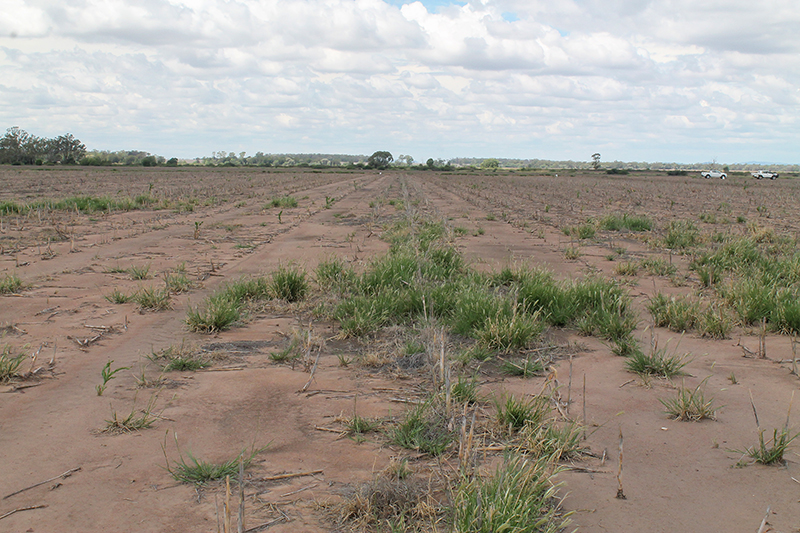 “After not being able to adequately control this established population with post-emergent herbicides, the remaining established FTR plants were removed during April by cultivation with a Kelly chain.

Mr Congreve says the overuse of post-emergence herbicide in this example proved not only ineffective on the established FTR, but also places extreme pressure on the development of herbicide resistant populations of the weed.

“Within this same paddock, demonstration strips of various residual herbicides were applied in September and December 2020. While the FTR plants present in these strips during spring 2020 were still growing in March 2021, there was no evidence of new seedlings, despite a large seedbank (see Figure 4).” 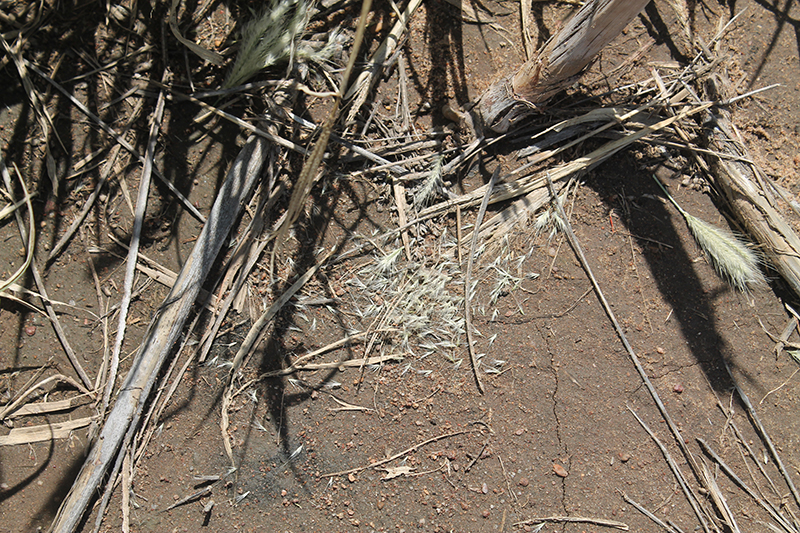 “The demonstration strips also show that residual herbicides effective on FTR must be applied before the first germination in late winter to early spring,” he says.

“If FTR does establish, it can be extremely difficult to control with post-emergent herbicides. Monitor high-pressure paddocks carefully during late winter to early spring.

"Aim to implement a robust strategy to prevent the first germination from becoming established, because large FTR is almost impossible to control without cultivation.”

Mr Congreve says managing any FTR that germinates in winter crops can be difficult.

“While some pre-emergents used at planting for the control of other winter grass weeds in cereals are effective on FTR, the efficacy of these herbicides is generally running out at the time they are needed to control spring germinations.

“In chickpeas, a residual herbicide such as isoxaflutole plus terbuthylazine (Palmero® TX) applied at planting can provide effective control.

“Should any FTR establish in the winter crop, an aggressive integrated management plan will be needed. Where plants are scattered, this may be achieved by hand removal before seed-set.

“If FTR has established in high numbers in a winter crop, consider green or brown manuring, or cutting the crop for hay.

“Follow up immediately with aggressive management targeting the surviving FTR, probably cultivation, to ensure FTR does not set seed.”

Mark Congreve, of Independent Consultants Australia Network, says some post-emergent herbicides can be effective if applied to fresh, small (less than two tillers) and actively growing weeds, when this is followed by a double knock application.

“However, relying only on post-emergent herbicide applications usually requires many applications over summer,” he says. “Often, this approach results in some weeds escaping control, which maintains the seedbank from one year to the next.”