A tiny exotic pest detected in the town of Tarlee, South Australia, in 2016 has since expanded its range across the country. It has been detected in five states in four years.

“In regions where the pest has established, every cereal paddock will most likely contain some RWA, but that does not mean it will reach damaging levels,” Dr van Helden says.

In August, the pest was detected in Western Australia in two wheat crops north of Esperance on the state’s south coast. It is also expected to spread to northern NSW and Queensland.

“Modelling shows they can establish everywhere cereal is being grown in Australia,” Dr van Helden says.

Initiated in response to the RWA incursion, the projects were led by Dr van Helden at SARDI. The initial project ran from 2016 to 2018 and the subsequent project in partnership with independent research group Cesar Australia ran from 2018 to 2020. Dr van Helden says the research in SA, Victoria, Tasmania and southern NSW showed low aphid numbers in naturally occurring populations caused no yield losses in 2018 and 2019. Conditions were generally dry before sowing in these years, but following wetter summers the risk of RWA colonisation of crops might be higher.

He says the absence of yield losses observed in the trials shows prophylactic seed treatments for RWA are often not needed so growers can avoid spending money on these treatments and determine the need for controlling RWA during the season.

To ensure this, researchers have developed a predictive approach to RWA management based on the rate at which aphid populations build to damaging densities that do cause yield penalties.

“The most accurate metric for predicting yield loss is the percentage of tillers with RWA,” he says.

The approach sees growers monitor cereal crops at growth stage 30 (start of stem elongation) to predict whether aphid numbers will cause pressure resulting in yield penalties between GS45 and GS50, when RWA populations tend to peak.

Dr van Helden says crop monitoring at GS30 enables growers to calculate the aphid population density by GS50 and determine the need for an insecticide application. This can be calculated using the new ‘RWA growth stage 30 action threshold calculator’. 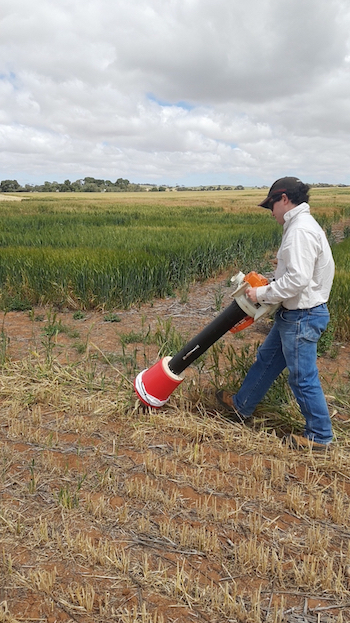 “The action threshold calculator developed for RWA is dynamic,” he says. “Yield potential, grain market prices and control costs are factored into the calculations for each season.

“The calculator will indicate the threshold when spraying is required to prevent an increasing RWA population from causing profit losses.

“The economic injury level is reached when the cost of pest control equals the value of yield loss resulting from RWA feeding damage. Beyond this point profit loss occurs.”

These new measures of aphid population build-up and thresholds to avert yield penalties were gleaned from inoculated trials where RWA had established in SA, Victoria, Tasmania and southern NSW.

There, the research team inoculated cereal trials with RWA at GS20 to promote high population pressure. About 50 aphids per square metre, or 500,000 aphids per hectare were ‘sprinkled’ on the experimental trial plots. 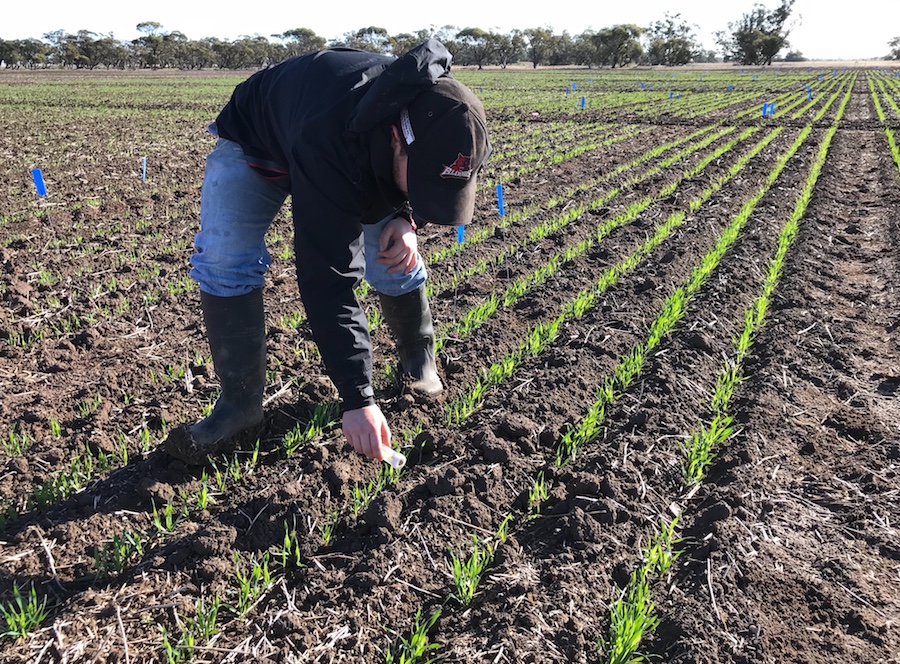 Tom Heddle from SARDI sprinkles Russian wheat aphids on a cereal trial, at a rate of about 50 aphids per square metre, to promote high population pressure in inoculated trials. Photo: SARDI

The aphids bred at SARDI were applied to 15 trials examining RWA effects on barley, wheat and durum wheat in 2019 and 2020.

Dr van Helden says the trials showed that high populations of RWA caused up to 30 per cent yield losses. This yield penalty was recorded in low-rainfall conditions at Griffith, NSW, in 2018.

“We saw the highest number of tillers with aphids and yield losses mainly in drier areas, with less than 400 millimetres of annual rainfall,” he says.

“Growers in drier cropping areas need to be vigilant in monitoring for RWA due to the higher risk of yield losses.”

He says an unexpected finding of the inoculated trials was that the rate of RWA population build-up and thresholds resulting in yield losses were consistent across different growing regions. This is despite the hugely variable crop yield potential and climatic conditions in the four states examined. 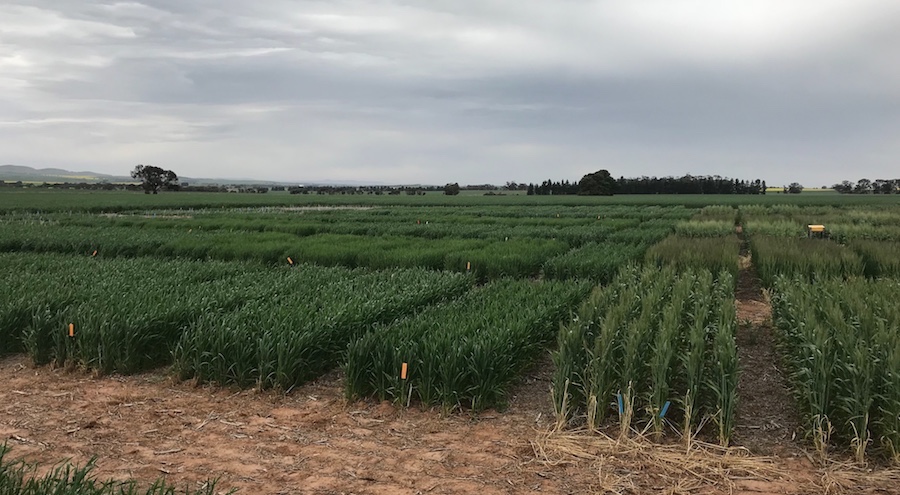 A trial site, including inoculated and non-inoculated cereal plots, to study the effects of Russian wheat aphid populations on barley, wheat and durum wheat at Riverton, South Australia. Photo: SARDI

Dr van Helden says that applying the new predictive tool, guided by monitoring at GS30, means growers can potentially avoid expenditure on chemical control measures for RWA, such as seed treatment. It can also be used to inform decisions on in-crop insecticide spraying.

“The most cost-effective approach is to put the crop in without seed treatment and then monitor to decide whether or not an insecticide spray is needed. It may not be necessary to spray the crop.”

For growers, this means a potential cost-saving on spraying and, ultimately, a lift in farm business profitability. The insecticide cost alone for an in-crop spray to control RWA is $4 to $30/ha and the contractor cost for spraying, including machinery, fuel and labour is $15 to $20/ha, he says.

However, in situations where spraying is required, Dr van Helden emphasises the importance of applying a minimum spray volume of 100 litres/ha to effectively suppress the pest. “Adequate spray volume is critical because the insecticide needs to penetrate the vegetation where the aphids tend to hide against stems and inside tightly rolled flag leaves.” Dr van Helden says symptoms of RWA feeding during the early growth stages of cereals are distinctive, providing a “warning signal” to assist with monitoring at GS30.

Indicators of RWA in wheat and barley:

But he adds that symptoms alone do not indicate whether the pest is occurring in high numbers or has caused damage resulting in yield losses and although symptoms are present, RWA may have since left the crop. “A single aphid feeding on a plant can cause symptoms,” he says.

The iMapPESTS project has facilitated the transfer of new data on the migration patterns of Russian wheat aphid (RWA) to research efforts, says Dr van Helden.

The data was captured with six-metre suction traps that collect long-distance migratory insects such as aphids. Data from the airborne pest samples collected by the suction traps can be used to infer RWA populations on a regional scale.

They are fitted to high-tech pest surveillance units, called sentinels, developed as part of the iMapPESTS project with GRDC co-investment.

Dr van Helden says sampling near Kapunda, South Australia, suggest two migrations of RWA occur during the winter cereal growing season – in March and between September and November. These migratory patterns were detected over three seasons from 2016-17 to 2018-19.

“The RWA migrations observed in March had the potential to infest crops because they coincided with sowing, meaning the pest could establish populations during the early stages of crop development,” Dr van Helden says.

“These early infestations could build up to damaging populations during spring over time.” 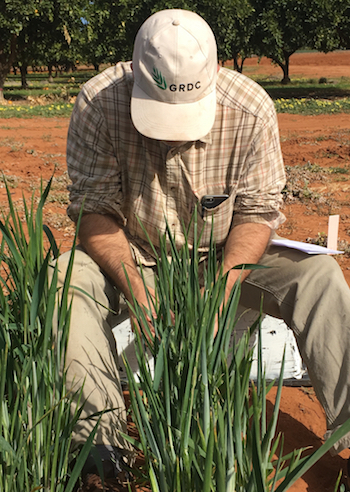 Although larger, the subsequent migrations observed from September had a relatively low risk of causing damage to mature cereal crops.

“RWA cannot establish on more-advanced crops, but they will still land on them,” Dr van Helden says.

The research indicates that yield losses only occur where aphid populations establish between growth stages 20 and 30, he says.

The inoculated trials found that once established in a cereal crop, RWA populations build slowly to damaging levels in spring between GS30 and GS50.

“The highest number of plant tillers with aphids occurred between GS45 and GS50 when the flag leaf emerges,” he says. “Aphid damage to the flag leaves mainly causes yield losses.”

Symptoms of RWA damage in the late stages of cereal crop development include:

He says the research shows the main “natural enemies” of RWA are parasitoid wasp species, which mummify the aphids to reproduce. Other beneficial insects observed feeding on RWA populations include adult and larval ladybird beetles and larval brown lacewings.

“Growers are encouraged to consider chemical control options that minimise impacts on beneficial insect populations, such as insecticides containing the pirimicarb active ingredient,” he says.

This was another finding of the GRDC-invested research collaboration between SARDI and Cesar Australia.

The plant samples, mainly grasses, containing aphids were collected with suction devices or Berlese funnels (a trap that separates insects and vegetation) from cereal cropping areas where the pest is established in South Australia, Victoria, Tasmania and southern NSW.

He says the surveys showed the main RWA host grasses that have an influence on pest population pressure when cereals are sown in autumn are barley grass and brome grass species. 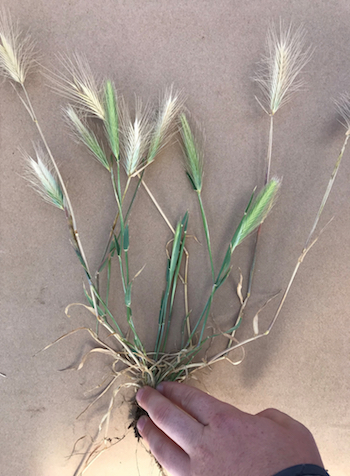 Barley grass is one of the main host plants for Russian wheat aphid. Photo: SARDI

“But it’s too hot and dry for these grasses over summer, so they only start growing with autumn rains, meaning RWA have to survive on other plants.

“We found that a summer-active native grass species, called bottle washers, was maintaining the aphid populations at low levels almost everywhere,” he says.

For instance, the pest was identified on a perennial native grass (Enneapogon nigricans) on a roadside, hundreds of kilometres from the nearest cereal crop on SA’s Eyre Peninsula in the 2019-20 summer, he says.

“RWA bunker down in this native grass to survive summer in low numbers. But following rain in autumn, the aphid can start to build its populations on other plant hosts, such as barley grass.”

The sampling also found irrigated areas, such as horticultural crops, vineyards, sports grounds, parks and gardens, provide a summer haven for RWA that can pose a localised risk to surrounding cropping areas.

Data from the study indicated RWA survival on green bridge plant refuges is linked to climatic conditions and soil moisture, she says.

“RWA persistence over the green bridge was found to be associated with moderate temperatures below 20°C and low to moderate plant available soil moisture, measuring about five per cent in the top 10 centimetres of the soil profile.

Dr Lye says data profiling the pest as part of the collaborative research has informed the development of a new tool that identifies locations where climatic conditions favour RWA populations from October to April.

“The model forecasts the locations where RWA would be most likely to persist and potentially colonise winter-sown crops,” she says.

For instance, it accurately predicted low pressure across most of the pest’s known range during the 2020 autumn. New RWA green bridge forecasts, including for the 2020-21 summer, will be published on grain extension platforms, such as future issues of PestFacts south-eastern. 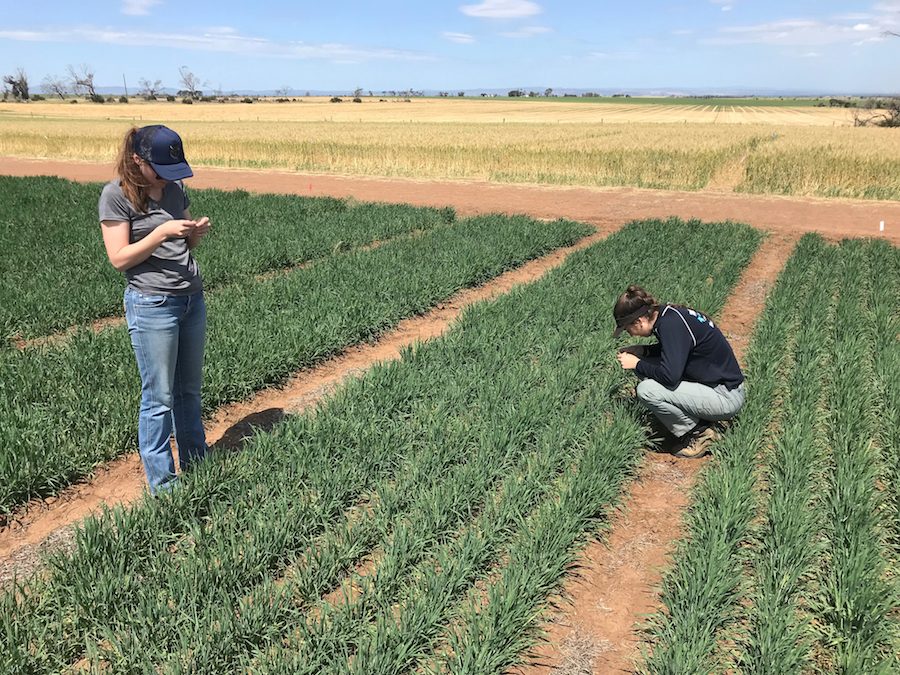