Mallee on high alert for mouse outbreak this season

Mallee on high alert for mouse outbreak this season

South Australian growers should also remain vigilant and continue to monitor crops and be prepared to bait if they find signs of mouse activity or damage.
Photo: Peter Brown

Grain growers in Victoria’s Mallee region are being urged to ‘walk through paddocks’ to check for signs of mouse activity and crop damage and apply bait where necessary to help drive down numbers before spring.

“Many grain growing regions of Victoria went into winter with high mouse numbers, so given the weather forecasts and the seasonal conditions, the modelling data now suggests mouse populations could be very high through spring and summer,” Mr Henry says.

“While in South Australia there are reports of mice in some locations, so growers should remain vigilant continue to monitor crops and be prepared to bait if they find signs of mouse damage.”

Victorian grain grower and Grains Producers Australia chair Andrew Wiedemann is concerned this season could bring a repeat of the mouse outbreak that plagued the region more than a decade ago.

“During 2010-11 in western Victoria, mouse populations plateaued or declined through the winter and rebounded the following spring resulting in significant damage in the ripening crops,” Mr Wiedemann says.

The situation has prompted Mr Henry to urge growers to get out into paddocks to assess the situation at a grassroots level.

“It is imperative growers get out of their vehicles, walk into their paddocks and get a good feel for what is going on in respect to current mouse numbers and activity,” the researcher says. 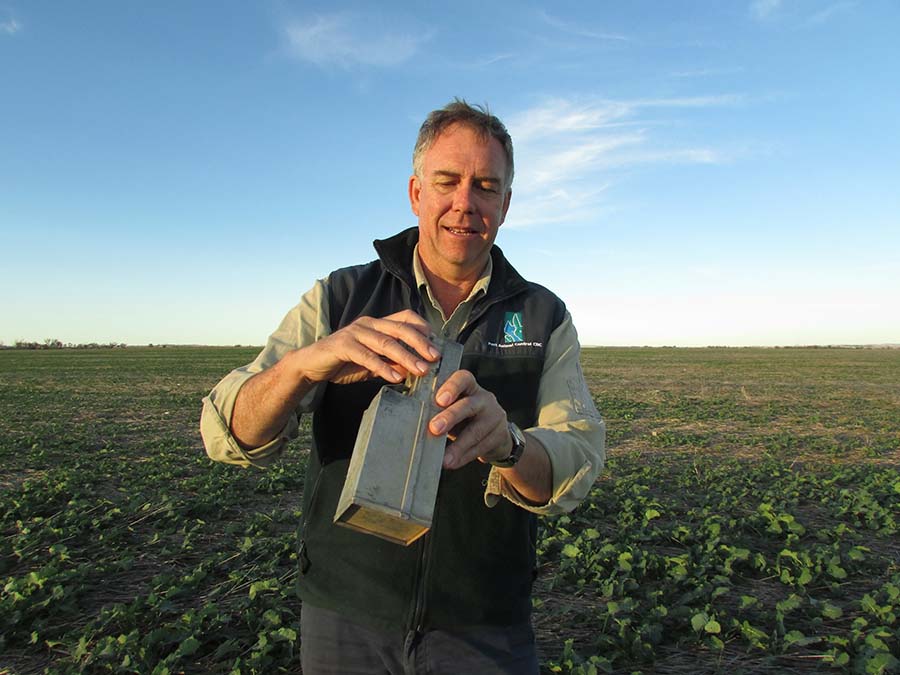 GRDC-supported mouse researcher Steve Henry is warning growers to monitor paddocks as predictive modelling based on Bureau of Meteorology (BOM) forecasts showed there was a high risk of a mouse outbreak in north western Victoria this season. Photo: GRDC

“Growers need to remain vigilant about checking for signs of active burrows or crop damage. In cereals this may be chewing at the node or stem. In canola and legume crops, growers should be inspecting flowers and pods for damage. Mouse numbers are likely to be patchy given paddock history, so it is important to look in multiple locations.

“At the first sign of crop damage in late winter and early spring, growers need to be prepared to bait, preferably with 50g/kg zinc phosphide spread at 1kg/ha. Aim to treat large areas to have a better chance of widespread impact and reduce reinvasion from surrounding areas.”

“If conditions are favourable – mice need food, shelter and moisture to thrive – the rate of population increase can be dramatic,” he says.

“Mice start breeding when they are six weeks old, and litters of six to 10 pups are born every 19 to 21 days.

“So early detection and timely application of bait at the prescribed rate is critical for reducing the impact mice have on crops.”

GRDC has produced mouse chew cards which are a highly effective yet simple tool to measure activity in the paddock. These can be downloaded along with more information about mouse control at the GRDC Mouse management page.

Despite considerable past and present investment ($6.9 million) in mouse-related research, development and extension (RD&E), GRDC recognises that mice continue to be a key constraint across the Australian cropping regions.

Studies have included searching for new tools and active ingredients, bait application strategies and ongoing monitoring and surveillance. Further investment in mouse-related RD&E is being undertaken to provide growers with new management tools and strategies for mouse management in the future.