The new cluster of surveillance machines developed as part of the iMapPESTS project, including Sentinel 2, left, Sentinel 3 and Sentinel 1.
Photo: AUSVEG

On the outskirts of suburban Adelaide, the whirr, hum, buzz and purr from a troupe of novel, high-tech machines speak the live-wire language of advancement in pest management for the grains industry.

This is the soundscape of three new surveillance machines, saddled with sophisticated technology that gears them to function as sentinels, watching over crops and monitoring them for damaging insect pests and disease-causing microorganisms.

They were built as part of the $21 million iMapPESTS project in partnership with the Federal Government's Rural R&D for Profit Program and seven plant industry research and development corporations (RDCs). Of these RDCs, GRDC has invested $1.8 million in the five-year (2017 to 2022) project led by Hort Innovation.

It also draws on in-kind investment from national and international partners, such as the South Australian Research and Development Institute (SARDI), Agriculture Victoria and United Kingdom-based Rothamsted Research and Agri Samplers Limited. 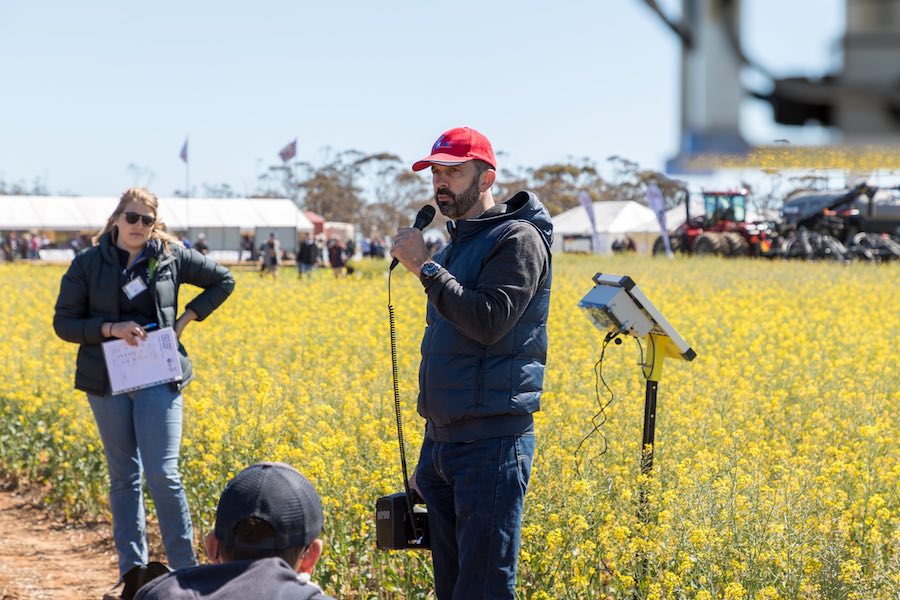 The lead scientist at SARDI for the national project, Dr Rohan Kimber, says the sentinels are the forerunners in a multi-sector approach to pest surveillance for a suite of industries: grains, cotton, sugar, horticulture, viticulture and forestry.

The aim is to monitor and rapidly report airborne insect pests and pathogens using a proof-of-concept system that Dr Kimber says is unprecedented, "not only in Australia, but globally".

"Using a combination of new air-sampling technologies and progression in diagnostic capabilities, we aim to prove we can deliver a data stream for insect pest and disease prevalence that is faster and more accurate than existing approaches," he says. "Currently, we can collect samples in one week, then analyse and report them to the iMapPESTS website in the second week."

Dr Kimber says these are the initial steps towards the ultimate goal of providing a real-time flow of pest data. The iMapPESTS system comprises four main steps. The sentinels collect samples of airborne fungal spores and insects, which are transferred to laboratories for analyses. There, teams of entomologists, pathologists and molecular diagnosticians focus on identifying target grain pest species.

Data from the analyses is uploaded to a cloud-based database and overlaid with location-specific climatic information also captured by the sentinels. The final step sees the resulting data set summarised and communicated through the iMapPESTS website (www.imappests.com.au).

Road-testing this capability was the small cluster of sentinel machines engaged in comparative testing and technical fine-tuning at SARDI's Waite campus in Adelaide during the COVID-19 pandemic.

Following its 2019 launch, the project's flagship Sentinel 1 completed two trials in SA. The trials covered grain cropping at the Hart Field Site and viticulture at Nuriootpa Research Station in the Barossa Valley. It was recalled from a third trial in sugarcane at Meringa Sugar Experiment Station near Cairns, Queensland, in late March as a consequence of the pandemic restrictions.

But Dr Kimber says its preliminary trial performance has already demonstrated the potential for the iMapPESTS system to inform on-farm pest management practices. He says data gleaned from the iMapPESTS website could alert growers to an abundance or absence of target insect and pathogen species in a cropping district.

This information, for instance highlighting an influx of migratory insects or fungal spore activity, could be used to guide and, ultimately, optimise in-crop scouting efforts to determine pest and disease pressure, Dr Kimber says.

For example, data showing an abundance of green peach aphid (Myzus persicae) might prompt an increase in on-farm scouting intensity to detect the pest during a sensitive crop growth stage. "Sentinel activity is not expected to replace scouting, but rather to help inform that crop management activity."

The reported data also provides a new channel of information that could be used to better inform the timing and frequency of established spraying regimes for insecticide and fungicide applications.

For instance, a grower might consider adjusting the timing or frequency of the farm's routine spraying program to control a recurrent fungal disease where the data shows low numbers or an absence of the causal pathogen species, reducing input costs. Aptitude for facilitating biosecurity efforts is another important capability that has emerged, to date, from the preliminary testing of Sentinel 1, Dr Kimber says.

"The system could facilitate a coordinated biosecurity response during exotic pest and disease incursions," he says.

Highlighting this proficiency, Sentinel 1 detected a pest insect species, an Asian honey bee (Apis cerana), in the trial at Meringa. This exotic discovery was quickly reported to the state biosecurity authority and the Sugar Research Australia entomologist working in partnership with the project.

The Asian honey bee was found to originate from a known local colony, but nevertheless its detection testifies to the sensitivity, accuracy and responsiveness of the biosecurity functionality for which the system was purpose-built, Dr Kimber says.

"In biosecurity situations, however, the data stream takes a different path through the appropriate biosecurity channels instead of being reported to the website."

Dr Kimber says that in addition to the discovery of exotic pest incursions, the mobile surveillance units can be deployed as a collective troupe in a coordinated biosecurity response.

For example, the sentinels could be mobilised to concentrate on monitoring in a particular growing area, such as SA's Tarlee cropping district where the Russian wheat aphid (Diuraphis noxia) was first detected on a property in 2016. 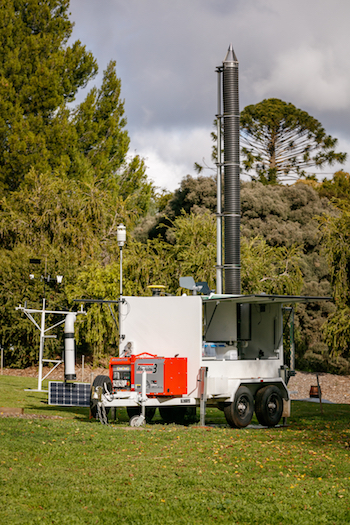 Each of the sentinels are equipped with a six metre-insect trap for collecting airborne pest samples that represent insect populations on a regional scale. Photo: AUSVEG

"A key competency of the sentinel, and its auxiliary surveillance systems, is its ability to provide localised information that impacts a specific region, which may not apply to growing regions in other parts of the country."

In contrast with conventional approaches to pest monitoring, each of the three sentinels incorporates a six-metre insect sampling device. "Samples collected with the six-metre trap mostly represent insect populations on a larger regional scale. Insects captured from a six-metre height are mainly smaller insects caught up in wind currents or larger insects that are intercepted in long-distance migratory flight."

Also supplying important context for the system's application to biosecurity efforts and farm management practices (scouting and spraying) are the climatic measurements that provide a backdrop to the sampling data.

Dr Kimber says this information helps build knowledge of the interactions between climate, weather and pest populations that could trigger damaging infestations or pest movement in the cropping landscape.

For instance, Sentinel 1 sampling at the Hart grain cropping and Nuriootpa viticulture trials showed a persistent abundance of Botrytis cinerea fungal spores. This finding was unexpected during the dry, hot conditions in late spring and early summer in 2019, Dr Kimber says.

"We were expecting to see more definitive fungal spore peaks associated with a rain front, but we found high spore numbers were blowing around in the wind all the time."

He says this new preliminary finding suggests the airborne density of botrytis spores remains constantly high irrespective of seasonal conditions, which has implications for understanding how the pathogen's dispersal patterns enable its populations to build rapidly in humid, wet conditions.

"The data set contains new layers of climatic information that could be used in forecasting and modelling.” 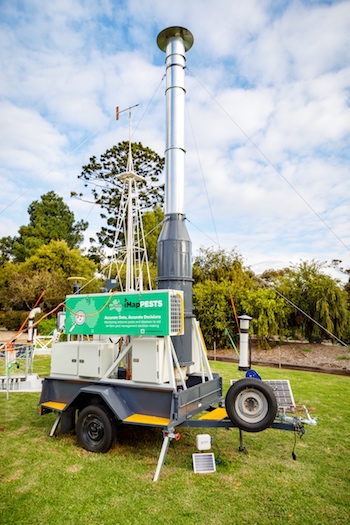 The experimental Sentinel 3, developed for $45,000, shows the potential for a lower-cost version of the pest surveillance units. Photo: AUSVEG

In future development of the iMapPESTS system, the SARDI research team is also exploring the potential for the sentinels to operate as low-cost modules that can operate independently and as part of a surveillance network, controlled by a master machine.

"A group of sentinel machines could communicate with each other and one could be used as the master unit that coordinates the communication and controls the other machines."

Mobilising the sentinels to operate as a collective network could provide district or region-based pest surveillance for grower groups, industry or government, he says.

Helping to demonstrate this possible application is the experimental Sentinel 3, which is a pared-back, uncomplicated version of its sophisticated counterparts, Sentinels 1 and 2.

The spartan design of Sentinel 3 consists of a trailer equipped with a new control system for the sampling technology. "Sentinel 3 is a testing platform for the technologies that we might adapt to Sentinels 1 and 2, or to the new modular design."

It was built at SARDI in conjunction with Adelaide-based Dematec Automation for about $45,000, roughly a quarter of the $200,000 cost of the other sentinels.

Dr Kimber envisages that the uncomplicated design of Sentinel 3 could be customised to the on-farm pest surveillance requirements of individual grain growers. "Sentinel 3 shows a lower-cost model might be viable in an on-farm context in the future.” 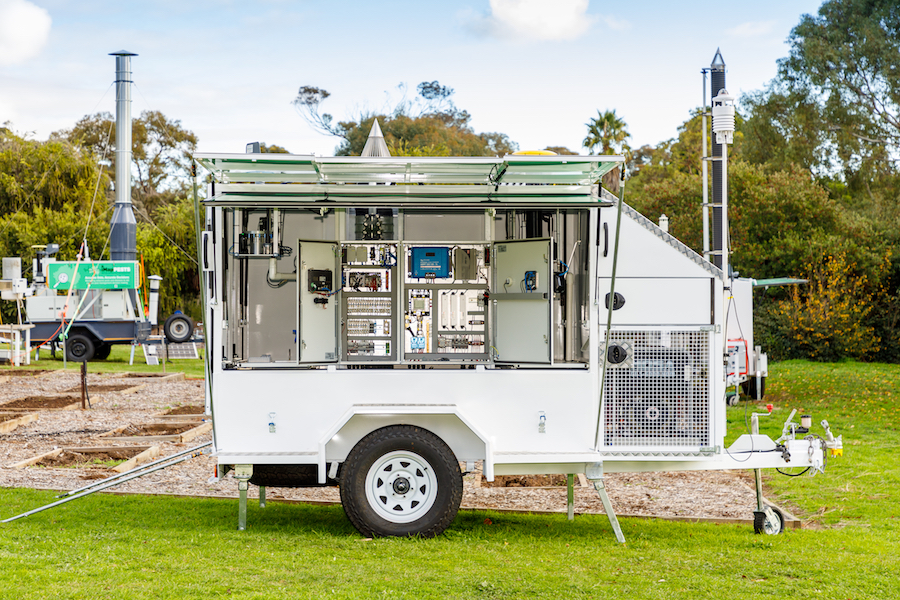 Sentinel 2 was launched at SARDI's Waite campus in Adelaide, SA, in late May. Photo: AUSVEG

The proof-of-concept project is now putting all these capabilities to the test through an ongoing trial program for the sentinels.

The planned schedule will see Sentinel 1 trialled in stone fruit and brussels sprouts in SA's Woodside area in July, before returning to Hart for a second grain cropping trial from August. Sentinel 2 is set for SA trials in a vegetable crop at Virginia from July, as well as grain cropping and forestry at Millicent from September. Sentinel 3 will continue to be tested at the Waite campus, with a focus on developing its modular design and cloud-based data system, in collaboration with Adelaide-based Data Effects.

iMapPESTS is targeting the following range of grain cropping pests, including insect and pathogen species, for monitoring and reporting. The project aims to develop diagnostic techniques and protocols for identifying the species not marked with asterisks.