Vigilance the key before canopy closure

Vigilance the key before canopy closure

Pulse growers in medium-to-high-rainfall areas in the southern region have been urged to remain vigilant against foliar leaf diseases during spring.

Growers are reminded to monitor crops closely for signs of disease due to the forecast for a wetter spring, following three years of average or below-average rainfall. A protective canopy closure spray can ensure that any disease present under the canopy is controlled.

Where moderate to severe disease is present, mid-season sprays ahead of rainfall could be needed. This is particularly the case when early disease symptoms are evident, soil moisture is high and dense canopy growth keeps moisture in the canopy.

Preparing ahead and regular monitoring will help ensure that sprays can be applied when necessary.

Buying chemicals ahead of time means growers will:

Michael Warnes, who grows lentils and beans in South Australia’s Lower North, says he has a stockpile of four chemical types, with enough on hand to spray three to four times. He monitors closely through the growing season, in conjunction with an agronomist, and says this season he is looking out for potential reduction in resistance to Ascochyta blight in lentil varieties.

Michael and his family have been growing pulses since the late 1980s, starting out with field peas, then faba beans and lentils. He says the addition of natural nitrogen into the soil outweighs the disease monitoring and control needed for pulses.

“Overall, the lentils have been a benefit for us, but now we are watching carefully because there appears to be a breakdown in resistance to Ascochyta blight in some lentil varieties and, previously, in faba beans,” he says.

“Ascochyta blight has been more of a crop downgrading issue at the end of the year in the drier seasons, but with higher disease in wetter seasons, it can decimate the crop. That is why pre-canopy closure control is so important. If we have a wet spring, we are ready to go.” 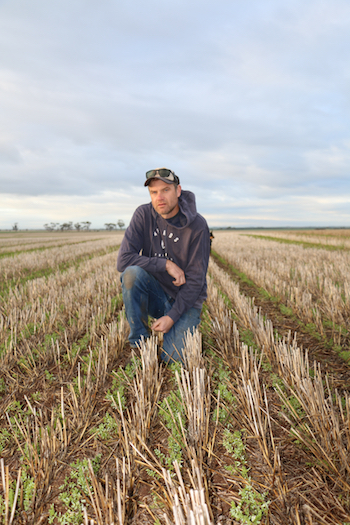 Michael Warnes, of Owen in South Australia's Lower North, says the addition of natural nitrogen to the soil by pulses outweighs the required disease monitoring and control. Photo: Supplied

South Australian Research and Development Institute research scientist Sara Blake says proactive monitoring can help growers prepare for disease control and enable them to be responsive at critical periods during the growing season.

“Fungicide sprays need to be applied ahead of rainfall to be effective and will usually provide two to three weeks of control, so regular monitoring in a wet season is critical,” Ms Blake says.

“If no rain is forecast, then sprays can be held off. Fungal foliar diseases such as Ascochyta blight are promoted by rain splash, while high humidity and warmer temperatures promote Botrytis diseases like grey mould or chocolate spot.

“Depending on the variety’s resistance rating, a fungicide spray may be required at podding to protect the developing grain and prevent seed staining, which can lead to downgraded quality.”

Current disease resistance ratings are best sourced from GRDC’s National Variety Trials website but are also available through the Pulse Disease Guides published separately by SARDI for SA and Agriculture Victoria for Victoria (see below).

In 2020, 78 plant samples from commercial pulse crops were sent to SARDI for disease diagnosis.

Ascochyta blight disease samples from pulses were also provided by growers and agronomists in response to social media campaigns, and collections were provided by pathologists from the field as part of targeted pathogen collections for GRDC national projects.

Of these samples, Ascochyta blight was found in all pulse crops, including lentils, faba beans, chickpeas, field peas and vetch, although at a low level in the dry season. This demonstrates the carry-over of disease in low-rainfall seasons for future epidemics in the next wet season.

However, this indicates that isolates that can overcome the resistance in PBA Highland XT are present in the pathogen population and could become selected for over time in farming systems where lentils are cropped intensively and under close rotation.

Shadehouse testing of Ascochyta blight isolates collected from faba beans in SA and Victoria on current faba bean varieties has resumed, supported by GRDC and in conjunction with the University of Adelaide’s faba bean breeding program.

Owing in part to the cold and wet disease-conducive conditions of the shadehouse, lesions had developed by mid-July on some plants, just three weeks after inoculation.

Ms Blake says all chickpea varieties in the southern region were susceptible or moderately susceptible to Ascochyta blight.

Ms Blake says precautionary on-farm practices during and after harvest are also vital to prevent disease spread and to minimise disease carryover into the next growing season.

As an example, Ascochyta blight inoculum could be found in four forms:

Ms Blake stresses the importance of growers working with their agronomist and SARDI or Agriculture Victoria if any disease is suspected.

“It’s best if growers or agronomists send in samples of diseased plant specimens, so that we can diagnose them accurately. It helps us determine the prevalence of certain diseases and we can then advise growers accordingly,” she says.

Instructions on how to select and send samples are available on the PIRSA-SARDI and Agriculture Victoria websites.