Crown rot has been given the elevated status of nightmare disease on the Nottle family farm at Booleroo Centre in South Australias Upper North.

The disease has been a longstanding constraint for the Nottles since the adoption of no-till farming, but back-to-back dry seasons in 2017 and 2018 have been the catalyst for a change in the way they approach managing the disease.

Matt Nottle concedes that a dynamic approach is now required to the farms crop rotation, with one-year breaks not providing an adequate buffer against the stubble-borne disease.

The family has been long-term followers of no-till for its moisture conservation and erosion-reducing benefits, but they have noticed an increasing prevalence of crown rot in wheat crops.

Crown rot has been given the elevated status of ‘nightmare’ disease on the Nottle family farm at Booleroo Centre in SA Upper North. Matt Nottle concedes that a dynamic approach is now required to the farm’s crop rotation. See here ➡️ https://t.co/1t13zRB4WV || @MattNottlepic.twitter.com/2KPSKUdFid

Dad (Trevor) used to get frustrated with it, but we just put it down to soil type and a tight finish to the season, Matt says. About seven years ago we had a patch of wheat with significant visual symptoms, including white heads.

We had three different agronomists from around the area come to look at it and they all put it down to crown rot. Previously we thought it might have been take-all, but thats when we confirmed what we were dealing with.

There is one particularly bad patch for crown rot on the Nottles home property, where Matt says across 440 hectares the disease can be found in every paddock. At its worst, crown rot can result in yield losses of up to 90 per cent on that block. Sensing this may have become a hotspot for crown rot, South Australian Research and Development Institute (SARDI) research scientist Dr Marg Evans got in touch with Matt through the Upper North Farming Systems group.

Trials conducted by Dr Evans with GRDC investment have demonstrated the effectiveness of multi-year breaks in reducing the impact of crown rot in cereal crops.

With the advent of stubble retention and direct-drill seeding there has been more instance of crown rot, Dr Evans says. Our research has shown that in situations like Matts, where there is a medium-to-high level of inoculum, a one-year break wont help to bring crown rot back to a low level.

An ideal crop in the break phase is one that closes its canopy early such as canola, creating a moist, humid environment under the canopy, which are ideal conditions for stubble breakdown and displacement of the crown rot fungus. 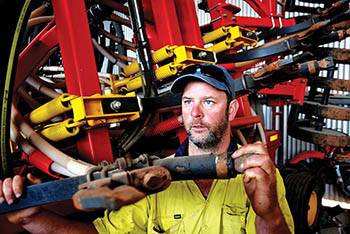 Based on Dr Evanss research, the Nottles adopted a two-year break crop strategy, which then turned into a three-year break.

In the first year we sowed barley (host) and vetch (non-host) for grazing, but it turned out to be a tighter year for sheep feed and we let the barley go through to tillering.

That meant we sprayed it out later than we should have, which in hindsight turned out to be a mistake. In the following seasons we grew canola followed by field peas before sowing the paddock back to wheat.

But even after that two-year break, PREDICTA® B testing showed crown rot inoculum levels were still high in the wheat crop.

The Nottles use a knifepoint and press wheel seeding system with the aid of real-time kinetic guidance to help them sow on the inter-row and avoid contact with old cereal stubble, which may be harbouring crown rot inoculum.

Matt intends to look into variety selection more, paying closer attention to varietal resistance to crown rot. He says encouraging the breakdown of stubble is the biggest challenge in managing crown rot. But with minimal winter rainfall, that has proved challenging.

Something I intend to examine more is the effect of strategic burning or strategic vertical tillage on reducing the stubble load and crown rot inoculum levels  just something to help start the breakdown of stubble, he says.

If we were to burn then we would do it as close as possible to sowing canola or a legume to minimise the risk of erosion.

PREDICTA® B has become an important tool to show the Nottles where the greatest risk of crown rot infection lies and help them plan their crop rotation accordingly.

Research on sampling strategies has shown it is very important to include cereal stubble from the paddock with the rest of the soil sample to help determine risk.

We have developed separate risk categories for crown rot based on whether cereal stubble was added to the sample or not, Dr McKay says.

Adding cereal stubble to the sample will provide the best results when testing for crown rot. Even if the stubble is two to three years old, it can still harbour the crown rot fungus.

Dr McKay says the number of soil cores people take as part of their sampling strategy is important, too. He says three cores are required from 15 locations across the area sampled  45 cores in total  to give best results.

If the number of cores taken is reduced then the test becomes less reliable and the chance of missing the true levels of a range of soil-borne pathogens increases, Dr McKay says.