Research exploring the genetics behind the increased incidence and severity of Fusarium crown rot (FCR) in most wheat growing regions of Australia is helping scientists to better understand the pathogen and open the way to managing the disease.

Important insights have been gained by leveraging information and DNA markers produced from a prior GRDC investment in sequencing the Fusarium pseudograminearum (Fp) genome. This is the main pathogen responsible for causing FCR on wheat in Australia. This reference sequence was completed in 2016. 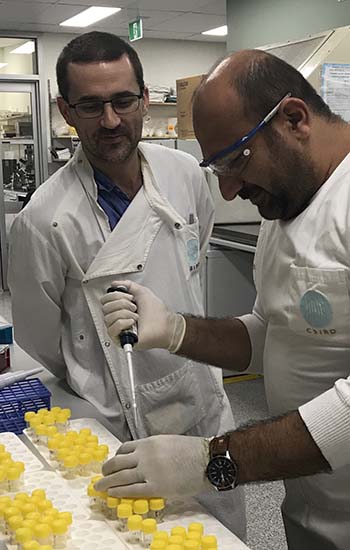 Dr Donald Gardiner of CSIRO Agriculture and Food led the genome sequencing project. He says the resulting genomic tools and insights allowed an exploration of notable shifts in FCR over time.

“We are now in a much stronger position to monitor changes in FCR population structure, incidence and aggressiveness as a result of this work,” Dr Gardiner says.

“We can also start to explore what is driving these genetic shifts, including any environmental, climatic or agronomic factors that may be applying selective pressure on disease severity.

The new work was carried out by PhD candidate Mohammed Khudhair as a part of a broader FCR collaboration between CSIRO, the South Australian Research and Development Institute, NSW Department of Primary Industries and the University of Queensland.

Dr Gardiner says that among the various shifts analysed was the growing incidence of FCR in the western wheatbelt. This work drew on the ability to use genomic tools to type the pathogen population in Western Australian paddocks over time.

The study made use of isolates collected at two previously surveyed sites at Tammin and Karlgarin. These sites were sampled in 2008 and again in 2015 to allow for a comparison.

Mr Khudhair found that Fp is growing as a proportion of all sampled pathogens at these WA sites. An increase from 59 per cent in 2008 to 86 per cent in 2015 was reported. This increase could account for the increased incidence of FCR in WA.

“The aim, ultimately, is to achieve a level of understanding that allows growers to make better disease management decisions. That will go some way towards recouping the estimated $100 million lost annually to FCR on wheat.”

“It became apparent that Fp has become the more dominant Fusarium species associated with FCR in WA,” Dr Gardiner says.

Also analysed were shifts in Fp aggressiveness. That a shift has occurred was confirmed using high-throughput crown rot seedling assays. These found that the WA samples of Fp collected in 2015 were much more aggressive than those sampled in 2008. A striking genetic difference was detected involving a gene cluster responsible for the production of a toxin, fusaristatin A.

“This gene cluster was uniformly absent in the isolates from eastern states, but present in about 50 per cent of Fp isolates from WA, with that ratio remaining constant over time,” Dr Gardiner says.

Importantly, the loss of fusaristatin A was found to be associated with faster growth rates and higher aggressiveness.

This link was confirmed through experiments that used genetically near-identical Fp strains that were tested on plants in parallel. One retained its intact genome. The other had its fusaristatin A gene cluster inactivated. The loss of the cluster was once again found to correlate with faster growth rates and increased aggressiveness.

“Clearly in the eastern part of the country, you do not need the fusaristatin A encoded compound at all,” Dr Gardiner says. “In contrast, a subset of the WA samples retained fusaristatin A. This indicates there is something unique about the WA environment that selects and maintains the gene cluster.”

As part of the FCR studies,  shifts were also detected in the type of mycotoxins present in Australian paddocks.

One of the most important classes of mycotoxins produced by Fp are the deoxynivalenols (DONs). These form part of the most diverse chemical group of all the mycotoxins.

In Australia, these toxins do not end up in the grain but rather affect pathogen virulence, which impacts disease load and yield.

Now for the first time in Australia, an additional mycotoxin has been detected: 15-acetyl deoxynivalenol (15-ADON). It was detected in 2.3 per cent and 2.4 per cent of disease-causing isolates from 2008 and 2015 respectively from Tammin and Karlgarin. The remaining isolates had the 3-ADON chemotype.

The researchers noted the possibility that the 15-ADON idiotype is unique to WA since this idiotype has not been reported in isolates from eastern Australia.

“What we need to understand next is what the drivers are of these shifts in population structure, FCR incidence, aggressiveness and in chemotypes,” Dr Gardiner says. “That will inform how we can best intervene to reduce disease loads.”

In the meantime, the new understanding, genomic resources and DNA markers will allow for enhanced monitoring efforts that capture ongoing shifts in Fp that have important implications for grain growers.