Advanced imaging technology is already used to identify plant traits that improve crop performance, resilience and yield stability – but now comes the ability to actually look inside the plant, head and seed.

This has become possible with the acquisition of a computed tomography (CT) scanner by The Plant Accelerator, the Adelaide node of the Australian Plant Phenomics Facility.

The CT scanner will significantly advance current imaging technology, which currently uses colour and hyperspectral cameras to screen external characteristics to map breeding and genetic populations. This type of analysis is called phenotyping.

Such an arrangement is ill-suited to taking images of plants and it had to be reconfigured for phenotyping applications. The device operating in Adelaide was custom-built, with the team in Adelaide working closely on the design with the Fraunhofer Institute for Integrated Circuits (Germany) and Dutch company PhenoKey.

“The custom design includes a conveyor belt and sample holders for grain spikes,” Dr Berger says. “That means phenotyping can be done in the automated, high-throughput fashion that achieves maximum efficiency for both pre-breeders working on trait discovery and breeders looking to assess breeding lines.”

To operate safely, the scanner needs to be lined with lead, which pushes its weight to about six tonnes. Its size and weight meant it could not be integrated within the so-called ‘smart houses’, where large conveyor belts transport potted plants to imaging stations that include colour and hyperspectral cameras.

Instead, the CT scanner is housed in an adjacent greenhouse. Installing it required first removing the wall of the greenhouse and then craning the device on to a specially built steel frame to spread the load. 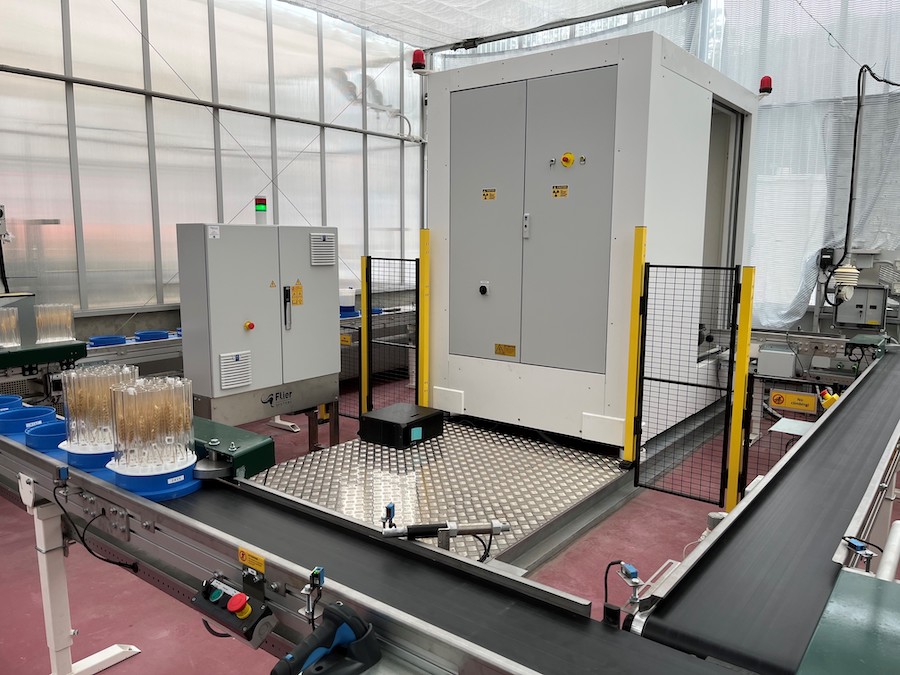 Installation got underway in October 2020 but COVID-19 restrictions prevented the European engineers – who were needed to get the device up and running – from travelling to Australia. In September 2021, one of the engineers was able to obtain a travel exemption to complete the installation with support from the team at The Plant Accelerator.

Test runs have since been undertaken, with the CT scanner used to reconstruct three-dimensional images of spike heads and seed. Thirty spikes were fitted into an individual sample holder.

A former PhD student at the University of Adelaide, Jessica Schmidt, has demonstrated the CT scanner’s utility in measuring the impact on yield of drought and heat stresses, with the images used to automatically compare differences in grain size, shape and number, as well as distribution along the spike of highly diverse wheat lines.

This kind of data massively accelerates the ability to identify genetic differences that associate with improved tolerance to a range of stresses, including frost, heat and drought.

The next stage will involve a diverse range of pilot studies, with researchers to calibrate the CT scanner data against traditional measurements. These pilot studies will get underway in early 2022.

“We started with an open call for trial project proposals, with researchers submitting project proposals for a range of research questions and crops,” Associate Professor Berger says. “These trials are the last step before opening up for business in 2022.”

Efforts are also underway to develop protocols and software tools that will allow the CT scanner to phenotype root characteristics. This work is still in the early stages, since the density of soil and the presence of organic content and moisture complicates the ability to extract images of fine roots.

“It’s been quite the journey getting the CT scanner up and running and there were a few challenges along the way,” Associate Professor Berger says. “But it has been worth it, given the detailed, ‘deep’ phenotyping it makes possible and the pivotal role this data plays driving advances in identifying stress-tolerant lines.”