Is this a renewable hydrogen source close at hand for growers? Two innovative companies are fine-tuning processes to extract hydrogen from crop straw with financial support from the Australian Government’s Business Research and Innovation Initiative (BRII) and support by GRDC.
Photo: GRDC

Roughly 95 per cent of the world’s hydrogen fuel is generated from fossil fuel. Now, with green hydrogen being pursued as a future fuel and source of ammonia for fertiliser, alternative technologies and feedstocks for the generation of hydrogen are being examined.

Ammonia is the precursor for many forms of nitrogenous fertilisers and is produced using the century-old Haber-Bosch process that reacts atmospheric nitrogen with hydrogen to produce ammonia (NH3). Traditionally, the hydrogen required for NH3 production has been obtained by reacting fossil fuels such as natural gas, mostly methane, with steam, or from cracking oil fractions.

However, consumers and ammonia producers are demanding a different kind of hydrogen – decarbonised, renewable, sustainable hydrogen – and they will require huge quantities of it. In the long term, there will be many large markets for renewable hydrogen; but in the near term, renewable fertilisers are the highest priority and represent a feasible, early market opportunity of great size. If it can be locally produced, this would be a benefit for the Australian grains industry.

Australia has developed a National Hydrogen Strategy that sets a vision for a clean, innovative, safe and competitive hydrogen industry that benefits all Australians. It aims to position our industry as a major global player by 2030.

For Australian grain growers, a feedstock that is readily at hand could eventually reduce the reliance on imported fertilisers. Two innovative companies are rapidly developing hydrogen extraction technology from this feedstock.

The feedstock is straw.

The companies are using different approaches, but both technologies have the ability to be modularised and then scaled and, potentially, coupled with new NH3 producing technology. This means the technologies could be used either on-farm, in co-operatives or in regional hubs to bring self-sufficiency and easy access to a hydrogen supply for growers.

Both companies have gained financial support from the Australian Government’s Business Research and Innovation Initiative (BRII) and are being supported by GRDC to address the challenge of turning straw into renewable hydrogen.

Initially, each company was successful in winning finance to support feasibility studies for their technology. More recently, they have received nearly $1 million each to develop proof-of-concept processes to convert biomass waste into hydrogen.

The technology being developed by both companies has potential to deliver benefits in a sustainable, circular economy on-farm through providing hydrogen on-site as fuel, for electricity generation or for chemical manufacturing together with other by-products that could be used for crop production.

These technologies are explained in the following.

In his acceptance speech for the 1918 Nobel Prize for having developed the Haber-Bosch process of NH3 production, Fritz Haber noted: “Nitrogenous bacteria teach us that nature, with her sophisticated forms of the chemistry of living matter, still understands and utilises methods that we do not as yet know how to imitate.”

Dial forward 100 years, where we now have a much greater depth of knowledge, which has allowed the development of new techniques, and the focus has shifted again to the potential use of bacteria – but this time in the generation of hydrogen.

For Associate Professor Louise Brown and her team, what started as a challenge to Macquarie University students to enter the International Genetically Engineered Machine (iGEM) competition has evolved into a start-up company.

She is now the chief executive of HydGene Renewables.

“My colleagues and I teach a synthetic biology unit in the science degree and in 2017 we put out a challenge to our students to create a genetic pathway in bacteria to produce a useful substance,” Associate Professor Brown says. 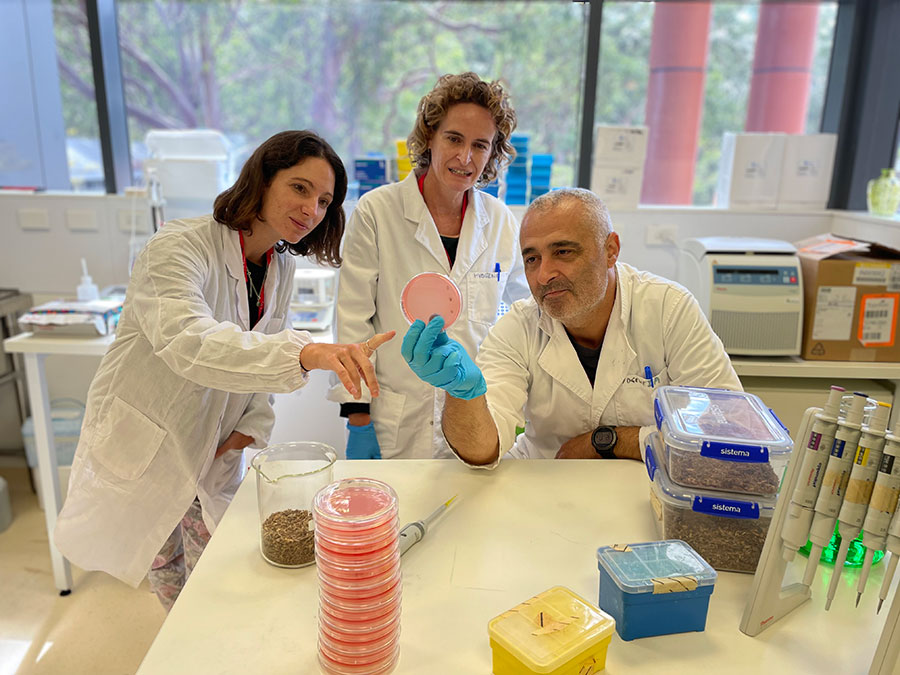 “A team of students developed a pathway in bacteria to generate biohydrogen from sugars that not only resulted in those students winning the Best Energy Project in iGEM that year but also provided us with an idea that we considered had great potential.

“We are currently in the proof-of-concept stage for turning straw waste into hydrogen using our bacterially grown, biocatalyst technology. In parallel, we are continuing to optimise the engineered bacteria that hosts our hydrogen generation pathway using synthetic biology tools. This involves optimising our bacterial strains to better use sugars for hydrogen production. We are also optimising our scale-up processes to achieve industrial-scale production from biomass sources.

“Together, from these efforts, our modelling projections show we can deliver a low-cost ‘farmgate’ price of between $2 to $3 per kilogram of hydrogen, depending on the feedstock waste source. At this low cost, we can start to compete with other hydrogen production technologies to deliver low-cost ammonia.

“Our aim for a hydrogen farmgate production cost of less than $3/kg includes the costs to the grower to collect and manage their excess waste on-site. The benefits for the grower are significant if they can use the hydrogen on-site as a clean fuel, for electricity generation or for chemical manufacturing including ammonia generation.

“For example, benefits start to arise when diesel fuel can be substituted by hydrogen when hydrogen is produced at less than $14/kg. A grower’s reliance on grid electricity can be replaced when hydrogen costs are below $7/kg. A hydrogen production cost of less than $3/kg is needed to decarbonise ammonia.”

HydGene Renewables have trialled wheat and barley straw and found these are much better than sorghum straw.

Typically, we would leave 10 to 15 centimetres of straw or stubble in the paddock for soil carbon and moisture needs, but this is up to the individual grower and their own management practice for their particular farm.

“We estimate that there is sufficient stubble on an average-sized grain farm to produce enough hydrogen to meet all their energy and fertiliser needs,” Associate Professor Brown says.

For this project, HydGene Renewables is reliant on new technologies that can directly use the hydrogen to make ammonia, such as the technology being developed by the CSIRO. However, HydGene is also investigating new ways to produce ammonia using synthetic biology methods, similar to how they have engineered the bacterial hydrogen technology.

“Our process is net carbon neutral. We are still working through the water requirement but the water used is minimal and will be recycled as part of our process.

“The hydrogen we make is very clean and can be used directly. We also produce the hydrogen on demand, so storage of large amounts of hydrogen on-site is not required, which otherwise can be very costly. With our technology, you can use the straw when you require the hydrogen, so the energy stays stored in the standing stubble or hay.”

The BRII proof-of-concept funding will also be used by HydGene Renewables to assess the commercialisation potential and opportunities for using clean hydrogen directly on the farm to generate electricity.

The second technology in development is a novel form of gasification.

Gasification is a well-known industrial process that breaks down carbonaceous feedstocks such as coal, biomass and heavy oil into synthesis gas (syngas), predominately carbon monoxide and hydrogen inside a sealed reactor vessel using controlled amounts of an oxidant at very high temperatures.

After completing a PhD in gasification in 2003 at the University of NSW, Greg Perkins spent much of his career in the oil and gas industry. By the 2010s, he was working on new gasification techniques for coal and heavy oil, alongside Denis Doucet and Grant Bollaert.

In 2016, Mr Doucet invented the concept of using a moving injection point to gasify biomass and waste materials within a sealed reactor. Recognising the need to move to greener fuels, the three men co-founded Wildfire Energy to commercialise the concept, which has evolved into the patented Moving Injection Horizontal Gasification (MIHG) technology.

The MIHG technology is a fundamentally different form of gasification that moves the oxygen to the feedstock. “This means that we can produce high-quality syngas continuously while loading the feedstock in a batch operation, which avoids feedstock pre-treatment and complex feeding mechanisms, and means we can handle feedstocks with variable quality,” says Dr Perkins, who is chief executive of Wildfire Energy.

“Our MIHG technology is especially developed for difficult solid wastes such as crop residues, domestic waste and commercial wastes, and applicable for small distributed projects. We can process whole straw bales directly in our MIHG reactors, whereas other technologies require the straw to be pelletised.

“We can also commingle different feedstocks so we can blend crop straw with municipal waste in the MIHG process. Co-processing domestic wastes in regional towns is attractive to reduce costs and reduce emissions.”

Wildfire’s MIHG system produces syngas (carbon monoxide and hydrogen), which is further cleaned to remove contaminants and then reacted with steam to maximise the hydrogen content. The hydrogen is then separated to produce a greater than 99.9 per cent pure hydrogen product suitable for use in ammonia production or in fuel cell vehicles.

In the feasibility study conducted for GRDC, Wildfire found that the levelised costs of hydrogen from MIHG were $1.50 to $2.50/kg from crop residues and could be about $1/kg when crop residues were co-processed with domestic wastes.

“CSIRO is actively developing a low-pressure ammonia synthesis technology, which would be a great complement to our technology. For customers, we envisage supplying full turnkey plants with our partners,” Dr Perkins says.

An example of the potential to develop a circular economy on-farm using Wildfire Energy’s MIHG technology.

“Our MIHG process produces green hydrogen as the major output, which can be converted to not only ammonia for fertiliser production, but also renewable electricity and heat/steam for milling operations are also possible end products. Biochar is an optional by-product that can be produced from the MIHG process and this can be used on-farm as a soil conditioner and for carbon storage.

As the MIHG units are modularised and scalable for growers, it means they could purchase a MIHG single-farm unit and reduce their fertiliser and diesel costs and sell carbon credits generated from the biochar. Alternatively, growers may pool their resources and establish co-operatives to own and operate MIHG processing plants and distribute the savings and extra revenues to the members of the co-operative.

In a feasibility study that Wildfire conducted in 2021 with GRDC and CSIRO, average savings of $293,000 per year were found for a 4000-hectare farm, mainly in the form of fertiliser savings.

“We are actively looking for partners and customers who would like to evaluate this solution for deployment in a grain cropping region, on a farm or in a rural community,” Dr Perkins says.

“Later this year we will be able to produce fuel cell grade hydrogen from any type of crop residue in our pilot plant. This will be a major milestone, so we are very keen to talk to parties who would like to know more and would consider working with us on a commercial unit.”