Improved heat tolerance has been discovered in bread wheat following an intensive five-year research effort to phenotype germplasm sourced from around the world.

Yield gains of up to 20 per cent in some lines under heat-stressed conditions were reported at the 2019 Wheat Breeding Assembly by former GRDC Scholar and postdoctoral research associate, Dr Rebecca Thistlethwaite, who works at the University of Sydney's Plant Breeding Institute in Narrabri, New South Wales.

The reported gain in heat tolerance was achieved by the best-performing lines from a pool of more than 3000 lines tested.

"We also have grain samples undergoing biochemical analysis at Flinders University and preliminary results point to increased zinc and iron - as well as reduced levels of phytate (an anti-nutrient) - in the tolerant lines.

"This may mean we have inadvertently selected for grain with enhanced nutritional value."

The yield benefit translates into an additional 700 kilograms per hectare on average in field trials in NSW and Victoria compared to established commercial varieties, such as Suntop (PBR), Livingston (PBR) and EGA Gregory (PBR).

The resulting 'recombinant lines' are undergoing field testing for the first time during the 2019 season.

GRDC has a series of YouTube presentations explaining some of the technologies being used in wheat breeding to address abiotic stresses, such as heat.

In the example below, University of Adelaide PhD student James Walter looks at the use of digital imaging and 3D laser technology to speed up phenotypic data acquisition, increase heritability and thereby contribute to advances in wheat breeding.

A three-tiered screening system was used to assess germplasm sourced from:

"What's interesting is that we are seeing Australian genotypes, such as EGA Gregory (PBR), that tolerate heat well, indicating that commercial breeding programs in Australia were indirectly selecting for heat tolerance at flowering time," Dr Thistlethwaite says.

To further enhance that resilience, the wheat lines selected for the project were first grown in large-scale field trials at Narrabri.

Subsets were assembled on the basis of performance that were additionally sown at Merredin, in Western Australia, and the Grains Innovation Park in Horsham, Victoria. 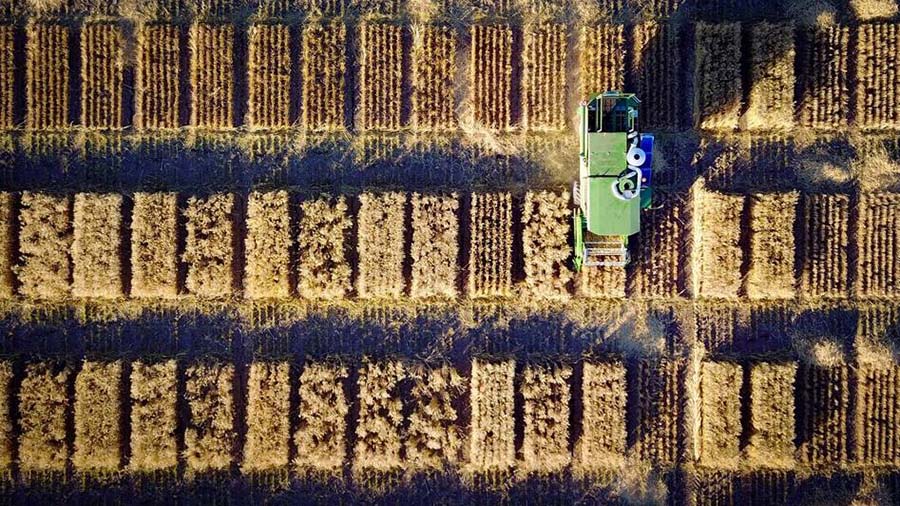 To ensure that the trial plots experienced heat stress, sowing was delayed to mid-July, with the results compared to the same lines planted in mid-May.

To assess performance, the lines were genotyped and subjected to extensive phenotyping, with the data also used to train Dr Daetwyler's AI algorithms and then assign genomic estimated breeding values - a score that summarises performance primarily based on yield and yield stability given heat stress.

In the second phase, the best lines were subjected to in-field heat chamber studies, in which paddock-grown plants were heat shocked over three days at flowering time to raise the temperature 5°C above ambient conditions.

In 2019, that meant the wheat lines experienced temperatures of 38°C at flowering.

The phenotyping included the use of drone-mounted cameras that can image in the visible, near-infrared and shortwave infrared both during the day and at night in order to examine performance differences related to night-time plant respiration.

Dr Thistlethwaite says one of the more striking examples among the visible phenotypes was differences in canopy architecture.

The findings corroborate discoveries by CSIRO's Richard Richards that a more erect canopy results in higher yields (as outlined in GroundCover™) and work is underway during 2019 to rigorously score the elite material for this important trait.

Along the way, elite germplasm has made its way to various breeding programs. But what excites Dr Thistlethwaite is the new germplasm bred in-house based on Dr Daetwyler's genomic predictions.

"Those lines are undergoing field trials for the first time in 2019 and, despite a harsh and dry season, they are holding up extremely well," she says.

The project is in its final year and Dr Thistlethwaite is now focused on maximising the project's output of exploitable data. 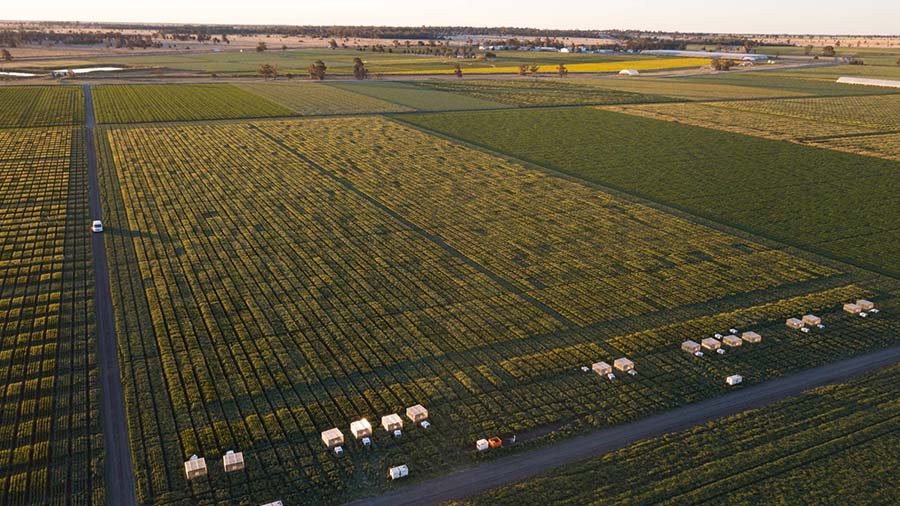 The opportunity to present her findings at the 2019 Wheat Breeding Assembly proved important. Dr Thistlethwaite networked with researchers whose trait discovery works intersect with the heat tolerance work.

Included were Dr Richards, who works on the erect canopy trait, and GRDC Scholar Ms Brooke Bruning, who is adapting the use of hyperspectral cameras to phenotype plants at the Plant Accelerator in Adelaide (as outlined in GroundCover™).

On a personal level, Dr Thistlethwaite says that the project has consolidated a passion for agricultural research and the GRDC's investment in this scientist looks likely to translate into a committed champion for the grains industry.

"I love seeing the biodiversity in the field growing under the harsh conditions that challenge grain growers," she says.

"Finding adaptive traits is the kind of challenge that drives me and I've discovered that I am well-suited to the get-down-and-dirty field work, such as harvesting our trials."

Part of the attraction is interacting with local grain growers, who are regular visitors to the research station.

She reports a two-way flow of information that includes growers pointing out what they like about the lines under development at Narrabri, based on decades worth of experience.

She might have started life as a 'city girl' in Sydney, but during the course of her studies, this former GRDC Scholar has acquired a passion for country life. She now volunteers for the Country Education Foundation of Australia to help support people from regional areas to access universities.

"I chose agricultural science based primarily on advice from my mother and father, Janette and Luke, who said to choose a discipline with long-term employment prospects and they mentioned agriculture since everybody has to eat," she says.

"It was, however, a big shock when I first moved to Narrabri, because it seemed like such a small town.

"Now, I experience this rural community as a vibrant, up-and-coming area, with world-class research facilities and great people."