Grain legumes were not part of the family farming landscape where Ash Moon grew up west of Pyramid Hill in north-central Victoria.

He became familiar with them when he was a student at Longerenong Agricultural College, near Horsham.

Ash's parents, Robert and Faye, were mainly sheep producers and cropping was a secondary enterprise in the farm business.

"Our break crops - because Dad was predominantly a sheep farmer - were clover, subclover or lucerne," Ash says.

But in the past eight years, since returning to farming, Ash has convinced his father to reduce the size of the sheep flock due to ongoing volatility in the availability and price of irrigation water.

Plus the family has increased its focus on annual barley, wheat and canola cropping - and introduced legumes to their crop rotation.

Ash and his wife Emma started farming 200 hectares of leased country and now they farm 800ha and share-crop another 900ha with Ash's parents and brother Dylan. 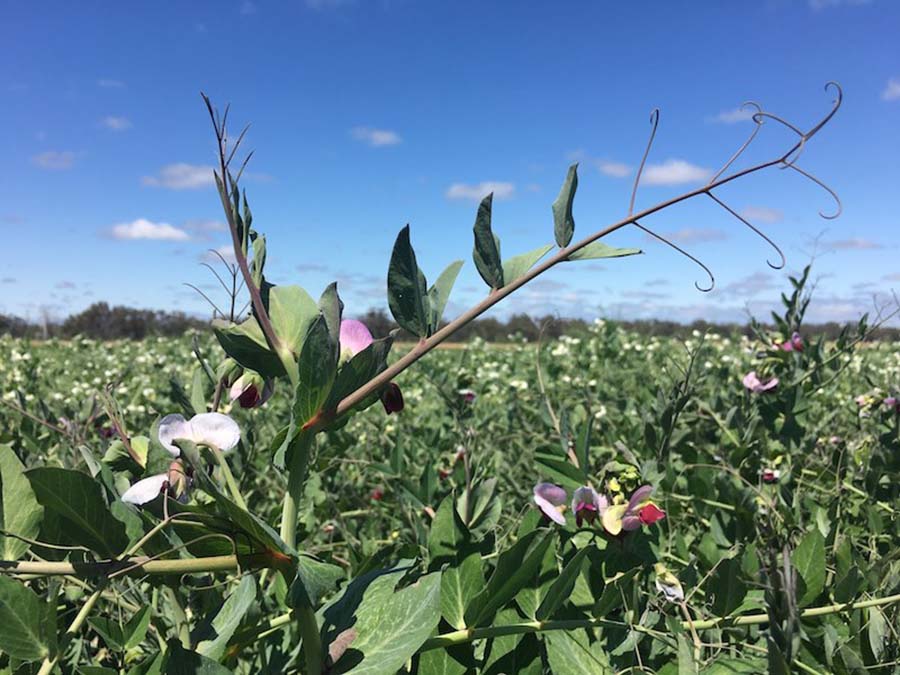 Ash recalls how pulses, including vetch and field peas, had previously been grown in the area east of Pyramid Hill. But he says they were rarely grown on the sheep and barley country west of the town.

He says farmers showed little interest in alternative break crops, such as pulses, during the Millennium drought. In those years, wheat and barley were the main crops grown in the area.

"We had some water again and that is when people showed more interest in pulses."

Ash describes mixed success with his first crop of field peas in 2013.

He says a late-season frost reduced the crop's yield potential from two to 2.5 tonnes per hectare to 1.5t/ha.

"The first year was probably the best year I have had with field peas," he says.

"After that, we had a run of frosts and dry years and we were not losing money - but we were not really making money.”

This experience of pulse growing prompted Ash to become part of a pulse discussion group.

His participation in the group followed a four-year Farming for Sustainable Soils (FSS) project, in which Ash and other growers contributed to a soil testing program across the district.

The program examined soil types, which vary from lighter loams in the Yarrawalla area east of the Loddon Valley Highway to heavy Tragowel and Macorna clay where Ash and Emma farm between Serpentine Creek and the Loddon River, near Durham Ox.

The soil tests showed the soil was not deficient in macro-nutrients, mainly due to the history of pasture crops, but zinc levels were low.

"The biggest constraint is the soil's sodic layer at 40 centimetres," Ash says.

"After a few dry years when you have cut back on inputs, you are only mining the soil - you can buy urea or you can grow (the nitrogen)." 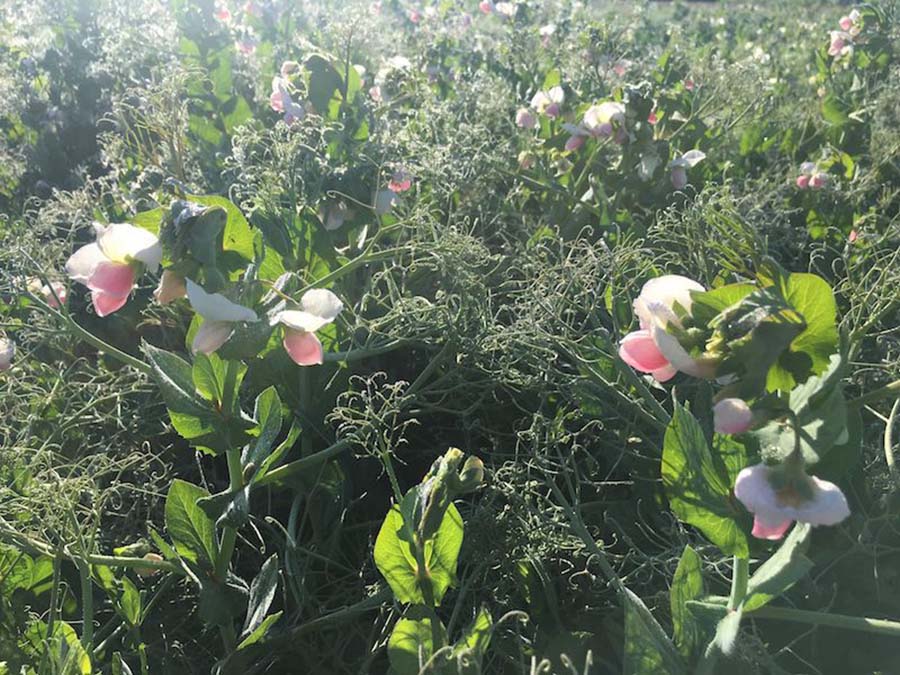 Field peas and other pulse crops have improved the performance of the Moons' cereal program. Photo: Clarisa Collis

This was illustrated in the 2015 season, when the quality of his barley crop was downgraded by a five-day heatwave in early October.

"But barley grown on the pulse stubble from the year before still made F1.

"There was no difference in barley management that year.

"The crop got going a bit quicker and probably had moisture from the year before.

"It did not have to compete with weeds or disease, so it was a healthy crop when that heat hit."

The FSS group explored ways to address soil constraints, which included improving soil structure through boosting its organic matter, and it asked the Birchip Cropping Group to run a pulse trial.

GRDC then invested in the Southern Pulse Extension Project that saw the establishment of the Pyramid Hill Pulse Check discussion group, which includes Ash.

Replicated trials were set up at two sites to examine the different soil types to the east and west of Pyramid Hill as part of the GRDC-invested project.

"In our first year of trials in the area, we saw some possibilities," Ash says.

"Even on pretty ordinary ground, especially the east side of Pyramid Hill, it showed we could grow some of these pulses until we ran out of moisture at the end of the year.” 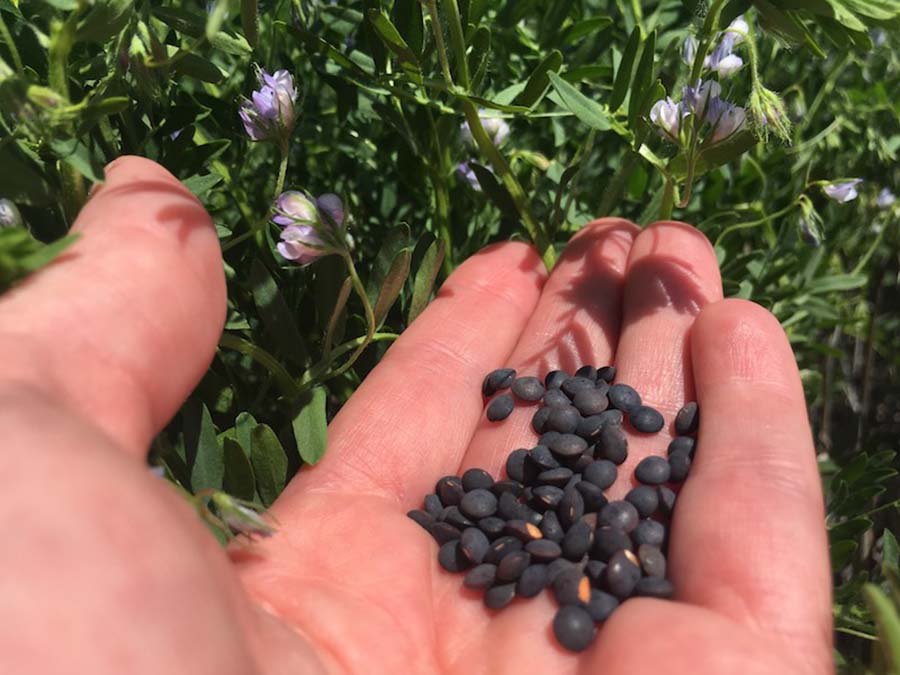 The Moons opted to sow lentils instead of field peas into a new paddock containing herbicide residue in 2019. Photo: Clarisa Collis

The group has also explored different ways to set up headers.

Ash says the Pulse Check group has highlighted that vetch can be a profitable crop, in part because of the district's proximity to vetch hay markets.

"But pulse prices can be volatile," he says.

"A grain marketer warned that if you are going to grow lentils, you have to be prepared to store them for a couple of years. It is not like wheat and barley, which you can cash-in at harvest."

Ash has grown faba beans under irrigation since 2015 and is now looking at pulses suited to dryland production.

He sowed 30ha of PBA Hallmark XT (PBR) lentils in 2019 on a new paddock that could not be sown with field peas because of herbicide residue.

However, the lentils appear to have been damaged by clopyralid herbicide residues still present in the soil from two years earlier.

"I learnt the hard way there," he says.

"I only got the chemical records for last year, but it is only a small paddock, so it is not the end of the world."

Ash is keen to learn more about different pulse varieties and see the results from the district's 2019 time-of-sowing trials.

Pulses are typically planted last in Ash's sowing program for two reasons: to help maximise soil moisture availability; and avoid producing an overly bulky crop canopy that can be susceptible to disease.

But this approach to pulse sowing has also exposed crops to greater risk of heat shock later in the season, he says.

As a consequence, Ash is considering sowing pulses earlier.

"Perhaps we should be changing our ideas about time of sowing," he says.

"Even if they do get frosted, at least we would get a paddock full of canopy bulk that will be good for the soil, or we can make hay."

Even though pulse cropping has provided a range of long-term benefits, including nitrogen fixation, a disease break and the opportunity to tackle Group A herbicide-resistant ryegrass, Ash says he wants to see better gross margins.

"If we can make more money out of them, we might grow them one in three years instead of one in five years.”

A major benefit of the Pulse Check group has been the opportunity to network with other farmers and agronomists across northern Victoria, Ash says.

"I find it interesting to hear what other people do and get different ideas to try.”