Inoculant development a key to growing pulses on acidic soils

Inoculant development a key to growing pulses on acidic soils

The GRDC Southern Pulse Extension project was established to help growers maximise income from pulses. GroundCover™ spoke to some of the people involved in the project about its outcomes

Growers in north-eastern Victoria have a long history of growing pulse crops, but they have not always been successful. Pulses prefer well-drained soils with a pH greater than 6.0, which is almost the opposite of many of the region’s soils.

Third-generation grower John Alexander, who returned to the family farm at Bungeet in 1973, recalls starting with lupins in the late 1970s after he was joined by younger brother Peter.

The area under cropping was expanded and lupins accounted for one-third of the crops until they became prone to sudden death syndrome, later identified as a root rot caused by the soil-borne fungus Phytophthora medicaginis.

“In the wetter years we were having at that stage on our soil types they were nearly totally dying,” John says. “We nearly had total loss with narrow-leaf lupins. We’ve dabbled a few times in narrow-leaf lupins since, but our heavier soils over Bungeet way didn’t handle it.”

The lupins performed better near Devenish on sandy loam, even with acidic subsoil, but falling prices led the Alexanders to choose canola as their main break crop when triazine-tolerant canola varieties were released. 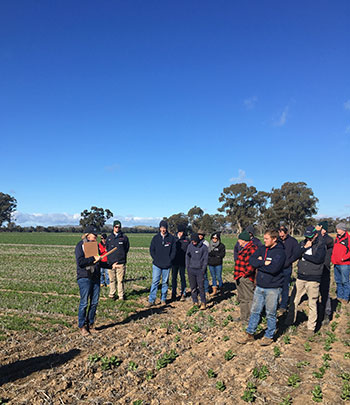 John says their next foray into pulses was faba beans on heavier soils at Bungeet, which have been very successful for the past 20 years.

He suspects many growers in the area have been deterred from growing faba beans by previous bad experiences, as well as the inconvenience of changing over equipment and sowing at slower speed because of the heavier seeding rate. Other obstacles include the larger seed, requiring specialised seeding equipment, and inoculation issues.

“Now people have moved into large-scale cropping, most are going flat-chat,” he says. “One of the disadvantages of beans is it’s a bit like hitting a brick wall with the sowing program: it really slows you down. A lot prefer to keep life simple: stick to canola and wheat and just go for it.”

Even though faba beans are prone to disease and require proactive management, John says the rotational benefits make it worthwhile. “Despite requiring extra management, we grow faba beans because it is another break crop and the value of the break goes for two years, which gives more reliability to the rotation,” he says. “A bean/canola/wheat rotation gives us a double break for weed and disease control.”

The Alexanders have also tried growing chickpeas and field peas, but not lentils.

“We did grow chickpeas for two years, but won’t be growing them again,” John says. “We have been trialling them in our Devenish country, but they are struggling to grow very well in the acid subsoil and we feel it is too big a hurdle with the current inoculants.”

Field peas have also been removed from the program because of unreliable yields and susceptibility to disease. “We had to sow them late and a lot of our failures were because we were sowing them late and then getting washed out or we couldn’t sow because it was too wet,” he says.

Even sown early they still got ringbarked with disease ... if you did have a successful crop it would blow up all over the fences and then you would have erosion issues because there was no stubble left.

He says the key to greater adoption of pulse crops is development of inoculants that are more suited to acidic soils.

Examination of the faba bean roots in September 2019 showed good nodulation in the test strip and the rest of the paddock, validating the soil test results. However, the test strip without inoculant yielded 300 kilograms per hectare less.

If background rhizobia testing becomes commercially available, Ms Coffey says it will provide valuable information to growers about the likely response in their paddock to inoculation.

New South Wales Department of Primary Industries (DPI) development officer Helen Burns attended a Pulse Check field walk in 2018 and demonstrated how some paddocks are developing an acid layer about 5 to 15 centimetres below the surface. This restricts root and plant growth, especially in pulse crops.

Application of lime can remediate acid topsoils, but John regards acid subsoils as the metaphorical “elephant in the room” and he considers Ms Burns’ visit a light bulb moment.

“It’s been an eye-opener the past few years through the Pulse Check discussion group to see just how acid the subsoil is in some of these soils,” John says. “Our Bungeet country is naturally alkaline subsoil and tends to get acid topsoil, which we can correct, whereas on the Devenish country we’ve been correcting the topsoil and growing good crops.”

John says traditional liming rates targeting a pH of 5 to 5.5 improve the topsoil and allow for the production of better crops. But growing better crops reduces the subsoil pH. Correcting this subsurface acidification requires even higher rates of lime, so the excess lime can eventually increase pH in the deeper layers.

It takes a long time for lime to move through soil. Delving, deep ripping or spading can incorporate it more quickly, but these practices carry the risk of bringing up toxic subsoil. GRDC, NSW DPI and Riverine Plains group ran a joint trial at the Alexanders’ Devenish farm during 2019 and 2020 to assess the efficacy of deep placement of lime. The Alexanders also are reviewing their lime application rates and trialling broadleaf lupins at Devenish.

John subscribes to what he calls the old leaky barrel theory, which prescribes first fixing all the leaks in the farm “barrel” such as pH, phosphorus, nitrogen and summer weeds to prevent losses. He also swears by direct drilling and uses a 3612 Conserva Pak air-seeder that he says is good for harvesting moisture.

“We don’t want to have water in our dams,” he says. “From a moisture harvesting point of view you want it to run into the ground where it falls so you can grow a crop over the whole paddock.”

On the rocky hill country unsuited to cropping, the Alexanders run 800 to 1000 first-cross ewe lambs that they usually buy each January and sell in November. That gives them the flexibility to tailor stock numbers to available feed – including pulse stubbles after harvest – and avoid interruptions from lambing at peak periods in the cropping calendar.