Jock Binnie in a crop of Scepter (PBR) wheat on his family’s farm near Bungeet, Victoria.
Photo: Rob Lacey

Jock Binnie has an inspiring level of enthusiasm for the task of marrying familial wisdom with the latest scientific knowledge to hyperdrive wheat yields.

The 21-year-old started farming full time when he was 16 and has spent a lifetime learning all he can from his father Travis, grandfather Bruce and uncle Jason Dyer.

Together, the family continuously crop land at Bungeet in northern Victoria and at Merriwagga in the northern Riverina region of New South Wales.

But it is Jock’s openness to combining experience from his family with the latest agronomic know-how that marks him as a humble yet solid achiever.

“You can never stop learning and striving for efficiency and timeliness,” he says. “There’s always something we can learn to improve how we run the farm.”

His approach was rewarded earlier this year when he earned two accolades in GRDC’s 2020 Hyper Yielding Crops (HYC) awards.

The awards are part of the GRDC HYC initiative, led by Field Applied Research (FAR) Australia, which spans the high-rainfall areas of Victoria, South Australia, Tasmania, NSW and Western Australia.

During August, HYC national extension coordinator Jon Midwood, of TechCrop Services, named Jock as the winner of the ‘Highest Yield’ and ‘Highest Percentage of Potential Yield’ in northern Victoria.

These accolades were earned with a 30-hectare crop of Scepter wheat, which weighbridge tickets confirmed produced 7.58 tonnes/ha of grain during 2020.

Mr Midwood says Jock’s achievements were significant because he was the only grower among the 65 entrants to produce a wheat crop that yielded higher than its biophysical potential. In the case of Jock’s paddock, the potential yield was 7.26t/ha.

“Jock’s crop outcompeted its potential yield by more than four per cent and was ranked first nationally in 2020, which was a fantastic performance,” Mr Midwood says.

“Scepter was the right variety for his environment, which hit the optimum flowering date perfectly.

“Jock has a good understanding of his soils and used on-time management to grow a high-yielding crop.”

Kate Coffey, a project officer at Riverine Plains, encouraged him to become involved after she spent the preceding three years facilitating a Pulse Check group at Dookie, of which Jock was a member, as part of the GRDC Southern Pulse Extension project.

“We worked together and shared experiences about what has worked and what has not worked when growing pulses,” Jock says. “It enabled us to tweak our management to improve our pulse production.”

In his opinion, more people would grow pulses if they were easier to sell. Nonetheless, he feels marketing will become easier in future as food manufacturers incorporate pulses into a broader range of products.

When the pulse extension project ended and the HYC initiative started, Jock says it was a natural progression to become involved.

He attended an online meeting in September 2020 and learned the aim of the four-year project was to lift the yields of wheat, barley and canola in high-rainfall areas.

Aside from visiting on-farm trials and learning about the results of replicated HYC plot trials, Jock decided to enter one of his family’s paddocks – ‘Thirty Hectares’ – of wheat into the awards program.

“I wanted to be part of the benchmarking program because we were hoping to use what I would learn to tweak our operation,” Jock says. “The benchmarking report has allowed us to see where we sit compared with other people in our area.”

Specifically, an entry to the awards involves contributing a season’s worth of data from one wheat paddock.

During August 2020, Jock selected a wheat paddock that had been sown into lupin stubble.

“It was a well-drained paddock of Scepter wheat, which we thought was showing the best potential for high yields,” he says. “As it turned out, it was the best-performing paddock on our Bungeet farm in 2020.”

All participants’ data from the benchmarking program is combined. An individual’s data, then, is compared with figures from a grower’s region and reported back to each grower in the form of a report. All data is anonymised to protect the privacy of individual businesses. 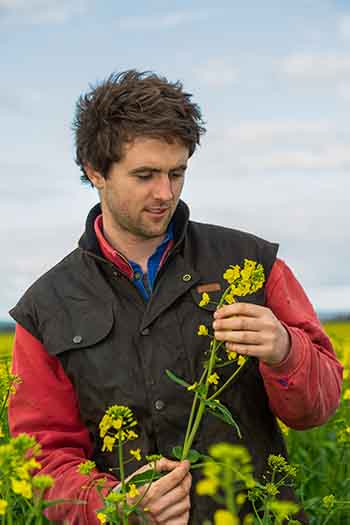 Canola is an important break crop on the Binnie family’s farms. The family prefers to grow Clearfield® and Roundup Ready® canola varieties.

“The benchmarking report has given us some suggestions of areas we can tweak in our system to improve our yields further,” Jock says. “And although we want to grow the big crops, we will weigh up what’s been suggested to maximise yield for the least cost.”

When Jock indicated he wanted to participate in the program, Mr Midwood and Ms Coffey organised the rest. This involved collecting soil, crop tissue, grain samples and various checks during the growing season.

Jock says his involvement was minimal, only calling for his participation at field days and documenting when various treatments were applied. He also provided weighbridge tickets to verify the crop’s grain yield.

Soil moisture at the Binnies’ farm during the first three months of 2020 was above average. April saw double the median rainfall, with conditions turning drier than average during May.

‘Thirty Hectares’ was prepared for cropping with an application of 118 grams/ha of pyroxasulfone (Sakura 840 WDG) on 10 May 2020. He sowed Scepter at 75 kilograms/ha on the same day using knife points.

Residue from the previous season was retained and an 18.29m Seed Hawk precision air drill set on 304.8mm row spacings was used to sow the crop in between rows of lupin stubble from 2019.

The Binnies’ drill is a double shoot system, enabling on-ledge sowing of seed and fertiliser placement into the bottom of the furrow.

Flutriafol was added to the fertiliser to protect the crop against stripe rust, Septoria tritici blotch and take-all.

“Lower-than-average rainfall during June and July was a welcome relief, reducing the instance of waterlogging across many areas where it typically occurs.”

According to Mr Midwood, these conditions set up the crop for a high yield potential.

On 3 July, a tank mix of 0.6 litres/ha of MCPA Ester and Diflufenican (Tigrex®) plus 0.06L/ha of Clopyralid (Lontrel® Advanced 600) was applied to take out in-crop weeds.

At growth stage 39, when the flag leaf had fully emerged on 18 September 2020, Jock applied 0.5L/ha epoxiconazole (Opus® 125) to protect the crop against disease.

“There were some frost events during winter but, fortunately, few, if any, in October and November,” he says. “Temperatures during the critical period in October to early November, about three weeks before flowering, were about 2oC warmer than the long-term average of 19.5oC.

“These warmer temperatures would have slightly shortened the critical period as crop growth would have been quicker during this time.

For the HYC awards, Mr Midwood says models were developed to consider the three climatic drivers of yield. These are water, temperature and radiation.

The calculated biophysical yield potential for Jock’s winning paddock was 7.26t/ha, which meant his percentage of potential yield was 104.41 per cent.

Looking back, Jock says participating in the 2020 HYC awards has given the family a confidence boost that they are on the right track.

“It was incredible to learn that we were able to exceed our potential yield,” he says. “We’re always aiming to grow the most profitable crops for the inputs applied.”

Nonetheless, the HYC benchmarking report showed soils on ‘Thirty Hectares’ were low in some trace elements compared to other paddocks in the region.

“We hadn’t considered trace elements, but the report has certainly alerted us to the fact that our potassium levels were below the critical level,” he says.

Jock says frost is one of the biggest constraints on the farm. The topography includes undulating country, valleys and steep hills.

Accordingly, the family likes to only sow one wheat variety from late April to mid-May to ensure all wheat does not flower on the same day to minimise the frost risk.

In drier years, Jock says income stolen by cold temperature during spring is clawed back by bailing frosted crops for hay.

“If frost hits, we generally have enough biomass to make more money out of hay than we would from the frosted grain,” he says.

Another constraint is acidic soils. Soil pH (CaCl2) was noted in the HYC report as being slightly low in ‘Thirty Hectares’.

Consequently, Jock says he looks forward to the wider release of acid-tolerant rhizobia products. It is hoped these will improve pulse nodulation and yields on low-pH soils.

Variable-rate lime is also on the agenda to better match tonnages applied to soil needs.

“Last year, we recorded just enough rain, without seeing too much waterlogging, whereas conditions this year are slightly too wet,” he says.

“We’ve had the helicopter applying fungicide on our faba beans because we haven’t been able to traffic some of our wetter paddocks.” Although faba beans can require up to four fungicide treatments via a helicopter in high-rainfall seasons, Jock says they are his pulse of choice when it comes to boosting the yields of following wheat crops.

He plans to enter a wheat crop into the 2021 HYC awards. “I don’t know which one yet because I haven’t got a crop that’s been planted into a pulse stubble,” he says.

And although faba beans might be costly to grow, he says the pulse certainly lifts yield and profit in subsequent crops through added nitrogen.

Knowing this, he is inspired to keep looking for ways to lift the bar higher for yields, while also boosting organic carbon levels in the family’s soils.

“I just really love working on the land and making our soil as healthy as I can,” he says.