James Venning prefers to select wheat varieties that avoid flowering during high-risk frost periods, rather than bale affected crops: “I try to stay away from the hay market,” he quips.
Photo: Catherine Norwood

Only a small portion of the land that James Venning farms on South Australia’s Yorke Peninsula is subject to frost, but it is this area that has been the focus of his recent experiments with new wheat varieties.

Scepter is the district standard around Bute, where James farms with his family, and it makes up the bulk of his own cropping program.

But last year he trialled two longer-season winter wheats on low-lying areas that are frost-prone, to optimise water use efficiency and avoid early flowering during high-risk frost periods.

In any one year, only 100 hectares of the 300ha of frost-prone land are planted to wheat, which has proven to be the most susceptible in the regular wheat/barley/lentil rotation.

“I think with frost, you have to work with the statistics. In our area, if you change the flowering date from late August to early September, that one-week delay in flowering reduces the risk of frost exposure by 50 per cent. And you only increase the drought risk – the likelihood of a hot day and dry finish – by five per cent.”

His data comes from the Australian CliMate app, which allows him to analyse local weather stations and related frost and drought risk. “So, I planned winter wheat in those frost zones, with spring wheat all around it, thinking it would mitigate the risk.

“If you delay sowing a spring wheat as an alternative method of avoiding frost, I find you lose too much of the potential yield on the non-frost-prone areas. The plan with the winter wheat is to hold the high-end yield potential over the whole paddock while dodging the frost in the lower-lying areas.”

However, his experiment, using DS Bennett and Longsword , was not quite the success he had hoped – thanks to a late frost. It was not a disaster either, with yields of three tonnes per hectare. But, for 2021, he had a rethink. The start of sowing was so late that the frost risk at flowering is expected to be minimal. But James is also concerned that the available winter wheats are not quite suited to South Australian conditions.

This year most of his wheat is Scepter . With the delay in rain, the early season Catapult stayed in the shed. He has plans to add Vixen as a shorter-season variety to his cropping next year, which would give him more flexibility with a later planting option to follow Scepter .

If more information was available about the phenology of the crop, such as flowering time and time to grain fill, he says it might give more confidence in his plans for Vixen , and for other new varieties.

His focus on these details arises from his need to optimise results from the low-nutrient, sandy soils he farms.

“So we found ourselves planting earlier and earlier, but then in 2017 we got severe frost on several paddocks. That’s what has prompted us to be smarter with varieties and to be more aware of flowering times.”

James is looking forward to having more-accurate and locally relevant information available as a result of the GRDC’s National Phenology Initiative, which will also produce data for inclusion in the South Australian Crop Sowing Guide, along with other data from the GRDC National Variety Trials.

“I think it will give us more confidence to make decisions, particularly when it comes to new varieties.”

Differences in flowering times were evident in the winter wheats he planted last year. “Longsword was quite slow to flower, but once it did flower, grain fill was fast. DS Bennett was also slow to flower but grain fill took much longer. It didn’t senesce until mid-November, whereas the other varieties were ready to harvest in early November.”

DS Bennett was also free of powdery mildew, which has become an increasing problem for wheat across the district. James says it particularly affects crops on the sandy soils across his farm, rather than the lower loamy areas.

A sampling workshop conducted with growers across the Bute region demonstrated powdery mildew with decreased sensitivity to Group 3 herbicides, and up to 50 per cent resistance to Group 7 herbicides. “We need some new varieties with improved resistance; there’s nothing really available for us at the moment.”

The barley is mostly Leabrook as a replacement for Compass , and one paddock of Spartacus CL , which has become the region’s preferred variety based on its tolerance to imidazolinone herbicides. This allows growers to use a pre-emergent to spray-out brome grass.

Lentils have become a regular part of the rotation since 2015, with 1900ha of Jumbo2 and PBA Highland XT lentils planted this year, along with 150ha of chickpeas (Genesis 090), which are planted opportunistically to take advantage of markets or seasonal conditions. “I have water at depth, and they perform well on a late start, compared to other crops,” James says.

James uses variable-rate fertiliser at seeding, which takes advantage of pH mapping of the farm to tailor applications to soil and crop needs.

He has trialled several businesses and techniques when it comes to soil mapping and has settled on the use of a Veris machine. This is a towed implement behind a tractor and collects 10 or 15 samples per hectare and logs the sampling points as the tractor moves along. From this it produces a map that shows pH levels across the paddock. 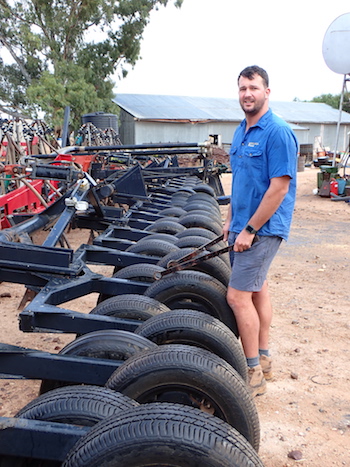 A few reference samples are laboratory-tested to calibrate the results. His agronomist, Sam Trengove, provides the machine and a driver and uses the Vennings’ tractor for the mapping.

James says this process is perhaps less accurate than other mapping services that lab-test every sample. “We only send a few samples to get tested, but we have a higher rate of sampling to compensate. And soils are so variable that I feel the higher rate of testing and the sheer volume of data works here.

“Anywhere that has a higher pH than 7.0, we use a higher rate of phosphorus – up to 30 units. So if we are using MAP with 22 per cent phosphorus, that equates to 150 kilograms/ha on those zones.”

The pH mapping was done largely as a result of a GRDC-invested project led by Trengove, which involved mapping and zoning paddocks based on the areas where phosphorus was being tied up in the soil and was unavailable to plants.

This aim of the project was to identify how variable-rate applications could target areas in need of extra nutrients and make more cost-efficient use of fertilisers.

The Vennings hosted a phosphorus trial as part of this research in 2020. James is also president of the Northern Sustainable Soils Association, a local grower group that has been following the project and visiting the research trial sites for the past two years. The association is also involved in GRDC liming trials and the Sandy Soils project (CSP00203), which have also led James to undertake an extensive liming program across the farm.

When the Sandy Soils project researchers were testing an underperforming site on his farm for a trial site, they quickly identified high acidity in the subsoil as the issue.

District practices have generally sampled the top five centimetres, where the pH is “mostly reasonable”, James says. “But we’re finding that our acidity peaks at 4.5 or 4.0, at depths of 20 to 30cm, before the alkalinity begins to increase again.” He uses a magnesium carbonate sourced locally to lime any soils that have a pH of less than six, and deep rips with inclusion plates, ideally the following year.

He began this process in 2019 and expects to finish the liming program early in 2022. If possible, the ripping is undertaken ahead of a barley crop, which provides more weed control options for grasses. Ryegrass is the main issue, but there is increasing resistance to available pre-emergent herbicides.

For the past three years, James has been using a chaff deck on his header, collecting any weed seed with the chaff into tramlines, which are then burnt as part of his weed control strategy. He is yet to see any major impact as a result of this strategy, but he is persisting on the advice of others in the district who say there will be signs of improvement in year four, and a significant improvement in year five.

In the coming season, James says agronomic practices, including weed and disease control, will be a priority. “With the late break, the soil was cooler at sowing and the nutrients less available. So, we might need to use more fertilisers and pay more attention to the growth factors compared to when you have an early sown, healthy crop.