While Pieter-Willem Hendriks was growing grain in France, he learned Australian scientists had developed wheats with the potential to suppress in-crop weeds.

As the son of Dutch parents who moved to France to expand their farming operation when he was 12, Mr Hendriks knew weed-competitive wheats were important.

“What farmers know better than anybody else is there are no ‘silver bullets’ when it comes to dealing with weeds, and each tactic has positives and negatives,” he says.

“Herbicides have enabled us to improve grain yields, but overuse speeds the onset of herbicide resistance and risks off-target effects.

“By contrast, there seems to be no negatives with weed-competitive wheats, which are established just like any other variety and will help to prolong the effective life of current and yet-to-be released herbicides.

“Also, they could be a cost-effective and easy-to-apply tool in the integrated weed management toolbox.”

With GRDC co-investment, Dr Rebetzke leads a team of scientists responsible for developing elite weed-competitive wheats as part of a CSIRO pre-breeding program.

Mr Hendriks first met Dr Rebetzke after completing a bachelor’s degree in biology at the Francois-Rabelais University in the city of Tours, France.

“I was working towards a master’s in agricultural engineering through the Higher National Institute of Agricultural Science, Food and Environment in the French city of Dijon,” he says.

“While completing my master’s, I visited Australia twice to research reduced tillering in wheat at CSIRO, and it was during this time I met Dr Rebetzke.”

For 14 years he sold produce direct from the farm to supermarkets, butchers, restaurants and private clients.

“While I loved farming, I could never quell the intense curiosity I had for grains research,” he says.

Accordingly, when he reached out to Dr Rebetzke in 2018, he was delighted by the response.

“You’re in luck mate,” Dr Rebetzke said at the time. “A position has just opened up for a PhD scholarship, but you’ll need to apply and be ready to move here straight away.”

After selection as the successful PhD candidate, Mr Hendriks and his family made the journey from France to Australia.

Since then, he has worked under the supervision of Dr Rebetzke and Charles Sturt University (CSU) research professor Leslie Weston, with support from CSIRO Agriculture and Food postdoctoral research fellow Dr Cathrine Ingvordsen and CSU research fellow Dr Saliya Gurusinghe.

Mr Hendriks’ task has been to better understand the above and below-ground mechanisms that make vigorous wheats competitive against weeds.

The mechanisms employed to outcompete weeds at the root–soil interface are considered the next frontier for significant grain yield improvements.

After arriving in Australia in October 2018, Mr Hendriks joined Dr Rebetzke on a drive from Canberra to Wagga Wagga. The aim of the road trip was to meet Professor Weston and Dr Gurusinghe, and to inspect research already underway.

The resulting progeny were then assessed for seedling vigour and weed suppression in replicated field trials under rain-fed and irrigated growing conditions at Wagga Wagga, Yanco and Boorowa in southern New South Wales.

“We compared the high seedling vigour lines with their parents, other weed-competitive commercial varieties such as Janz and Condo, the heritage variety Federation, a cereal rye cultivar and triticale over three seasons,” Mr Hendriks says.

“The high seedling vigour wheat lines had larger seedling and flag leaves, which led to early canopy closure, shading at the soil surface and superior light interception in dry and wet seasons.

“Accordingly, there were 50 per cent fewer weeds under the high seedling vigour lines and no significant effects on grain yields when compared to Yitpi and Wyalkatchem.

“Further analysis showed light interception from Zadok growth stage 21 (30 days after sowing), and ground cover at the end of tillering (41 days after sowing) were the most important variables for predicting a wheat cultivar's capacity for weed suppression."

When Mr Hendriks turned his attention to the below-ground traits, the data confirmed the high seedling vigour weed-competitive wheats also had root systems that typically penetrated deeper into the soil earlier in the season.

“We found that increased seedling vigour resulted in smaller but more cells and this led to a higher density of longer root hairs and more stomata on the leaves.

“While root hairs are important for the uptake of water and nutrients, stomata are the microscopic openings on the surface of plant leaves through which carbon dioxide and water enter from the atmosphere, thereby facilitating photosynthesis. which is known as the rhizosphere.

“The increased early growth of the high seedling vigour wheat lines leads to rapid canopy closure, which is critical for depriving nearby weeds of light, water and nutrients needed for growth.”

“These bio-herbicides are released into the interface between the root system of a plant and its surrounding soil, which is known as the rhizosphere.

“Data analytics are now underway to confirm whether the allelochemicals released into the rhizosphere of high seedling vigour wheat lines accumulate at concentrations sufficient for suppression of nearby weeds.”

“It is great to know the best elite germplasm from CSIRO’s weed-competitive wheats pre-breeding program is already in the hands of Australia’s commercial wheat breeders,” Mr Hendriks says.

“All going well, hopefully we will see weed-competitive wheats released commercially in the near future to maximise returns for Australian grain growers.”

Pieter-Willem Hendriks says he is grateful for co-investment from Australian grain growers through GRDC to complete his PhD.

“Completing a PhD requires supervisors, mentors and technical staff, whose input I have found stimulating and inspiring,” he says.

“I am grateful to GRDC, Charles Sturt University, CSIRO and the AW Howard Memorial Trust through the Tim Healey Memorial Scholarship, whose combined co-investment made my postgraduate research possible.” 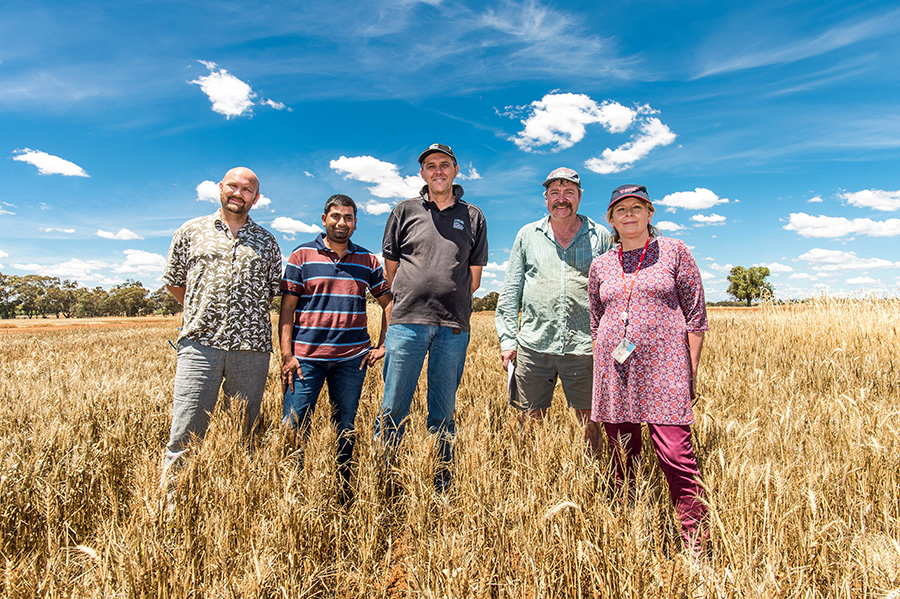