Decision-making is an essential element of farm business management. Grain growers are often confronted with complex decisions that are made difficult due to a range of reasons.

Yet we still need to make a decision, even if it is to do nothing.

We don't often think about the process behind the decisions we make. Decision-making is a skill. Often in farming, decisions must be made with a lot of factors that are unknown or uncertain.

The good news is that there are processes that can be followed to guide a decision.

Elements of a good decision

1. You appreciate the consequences and likelihood of various actions you could take. In other words, you 'understand the odds'.

2. You understand the level of regret you will have with each possible outcome. We often appreciate regret only after a negative result rather than before. You need to be open about what could go wrong and how you would feel. Taking the time to structure up a decision matrix of your own may help you understand what factors, influences and biases are at play in your thinking. Photo Brad Collis

Decisions are influenced by our head, our heart and our gut.

Using the head is the logical or orderly approach to analysing and solving a problem.

The heart provides the emotional influences on the decisions. These are based on our values, beliefs and fears.

The gut refers to the intuitive influence on a decision and is shaped by our experiences and knowledge.

The relative influence of the head, the heart and the gut often depends on the type of decision we need to make.

The more difficult or complex a decision is, the more we rely on experience or gut to inform the decision. Complex decisions don't have a single 'right' answer, instead they have many possible approaches to achieve the same desired outcome.

Commonly they have pros and cons to consider, so the decision needs to be made 'on balance'.

Working through a decision - frost damage

An example may help illustrate how these various forces shape the decision we might make.

Imagine you wake one morning when crops are flowering and there has been a severe frost overnight in the district. You have experienced severe frosts many times before and last time decided not to cut the crop - instead it was taken through to grain.

Yields at harvest were estimated to be 70 per cent lower than the unfrosted areas, with much higher screenings.

In hindsight, you kicked yourself for making the 'wrong' decision - you should have cut the crop.

This time, without hesitation, you decide to cut it for hay. Regret or pain from the previous experience is heavily influencing this current decision. The pain of loss has been described as twice the pleasure of gain.

In other words, erasing the psychological pain of the previous loss requires a gain at least double the actual loss incurred.

A critical skill to learn in decision-making is to recognise and acknowledge that these negative feelings - and the unconscious requirement for a big win to make the choice attractive again - might be influencing the next decision you make.

A way of structuring a good decision

Developing a decision matrix can provide a structured and balanced approach to key decisions.

This combines the elements of what makes a good decision and helps balance the influence of the head, heart and gut.

If used for a recurring decision, it can be refined over time as your knowledge and experiences build.

So how could the decision matrix be applied to the frosted crop decision?

A seven-step approach is recommended:

Step 1: Clearly define the decision you need to make

In this case it is: 'Should I cut this crop for hay or take it through for grain'?

Step 2: List the major considerations that should influence the decision

Remember to check for any new information or research on the topic. Usually there are only four to eight considerations.

In the frosted crop example, it could include obvious things, such as the estimated area frosted and the grain value, if harvested, compared to other uses for the hay. But it could also include other factors, such as the likelihood the unfrosted parts of the crop will finish as grain, whether the hay can be stored, whether there is a market to sell into, and the presence of problem weeds that could be cleaned up by hay making.

Step 3: Take each major consideration in turn and ask 'at what point would I think differently about my response'?

For the estimated area of frosted crop, it might be:

For the value of the crop (which includes yield and price) it might be:

This is repeated with the other major considerations. Once all considerations have been examined, a table can be created (see Table 1). 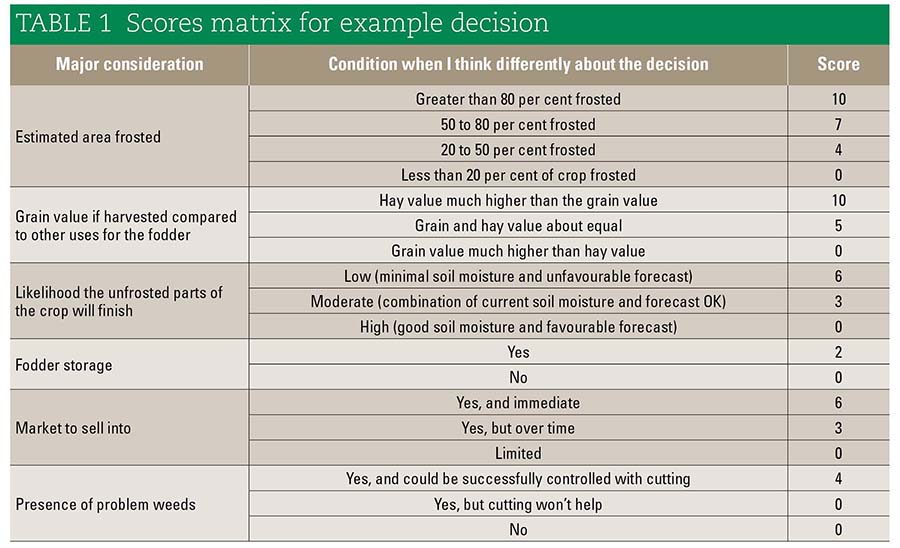 Step 4: Assign scores to each condition

A handy tip is to assign all the lowest conditions as zero. Then consider the highest described condition and give them a score relative to the other highest conditions.

Once the top and bottom are established, it is relatively easy to fill in the remaining condition scores.

Don't be afraid to ask an external specialist for assistance in understanding the facts of a decision - but remember that it is your decision to make, not theirs.

Another question to ask yourself is 'what can I do to prepare myself with more objective information next time'?

For example, in the case of frost, temperature data loggers to check actual overnight temperatures in the crops are commercially available.

Step 5: Add up the maximum score if all conditions were at their highest (maximum is 38)

This is relatively easy because it is black or white. It becomes more difficult in the grey area, where there are pros and cons.

The best you can do is fill in other possible decisions you could make in between the two extremes.

In this case, a wise decision might be to hedge your bets and do a bit of both. Assign some preliminary scores (see Table 2).

Step 6: Think of an extreme historic example (usually a year or season) when, in hindsight, it was the 'right' decision

This would be such as deciding to cut crops for fodder in the frost example.

Calculate the score for that example at the time the decision needed to be made.

Does the 'right' decision correspond with the score, as outlined in Table 2? If not, adjust the score accordingly.

Repeat with another extreme, but opposite, example. Then estimate the score or scores in between the extremes and run a less clear-cut example.

S tep 7: Test with a series of hypothetical examples (so you get a score) and fine-tune the decision score if required

For example, if about 40 per cent of the crop was frosted (4), the estimated value of the fodder (yield times price) was much greater than the grain (10), the chances of a good finish to the crop were moderate (3), we couldn't store the fodder (0), there was immediate market demand (6) and there were no weed problems (0), then the score would be 23.

The suggested decision would be to cut some for hay (the frosted bits). However, if there was no market for the fodder, the score would be 17 and the decision to take through for grain becomes stronger.

Farm business management decision-making is rarely perfect and often complex decisions must be made in very short timeframes and with incomplete information.

Taking the time to structure up a decision matrix of your own may help you understand what factors, influences and biases are at play in your thinking. It is also a way of explaining and sharing your decision process with other family members and business partners.