New research shows more profit is available for those willing to make even just a few adjustments to their farming systems.

The changes – including shifting to March sowing and allowing sheep to graze cereal and canola crops, integrating appropriate legumes into the system, and applying appropriate nitrogen rates – were all explored in a three-year farming systems project with GRDC, CSIRO and NSW Department of Primary Industries (DPI) co-investment. 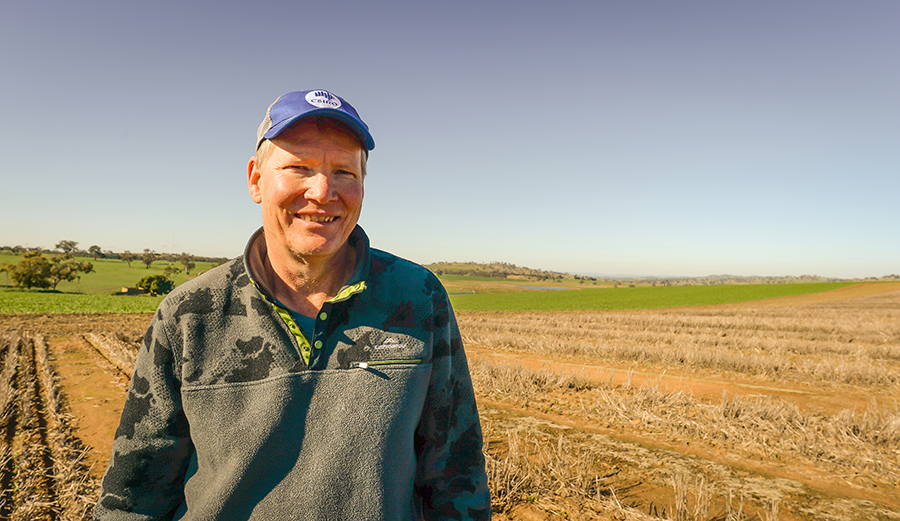 “Profit and efficiency in terms of dollars per millimetre of rainfall can be lifted by making some simple, but targeted, changes to your cropping sequence, sowing time and nitrogen strategy.

“There isn’t a single recipe for improving returns, but a range of ways to achieve a profit lift that will be suitable for farms with and without livestock, and operators who may or may not be willing to grow pulse crops.”

Since 2017, CSIRO and NSW DPI researchers worked with local agronomists and growers to establish farming systems experiments at four sites across southern and central NSW.

Grower collaborators nominated the baseline systems for each site, which included either canola/wheat/wheat or canola/wheat/barley sown from late April to early May (timely) and a conservative or low (decile two) nitrogen strategy (see Figure 1). 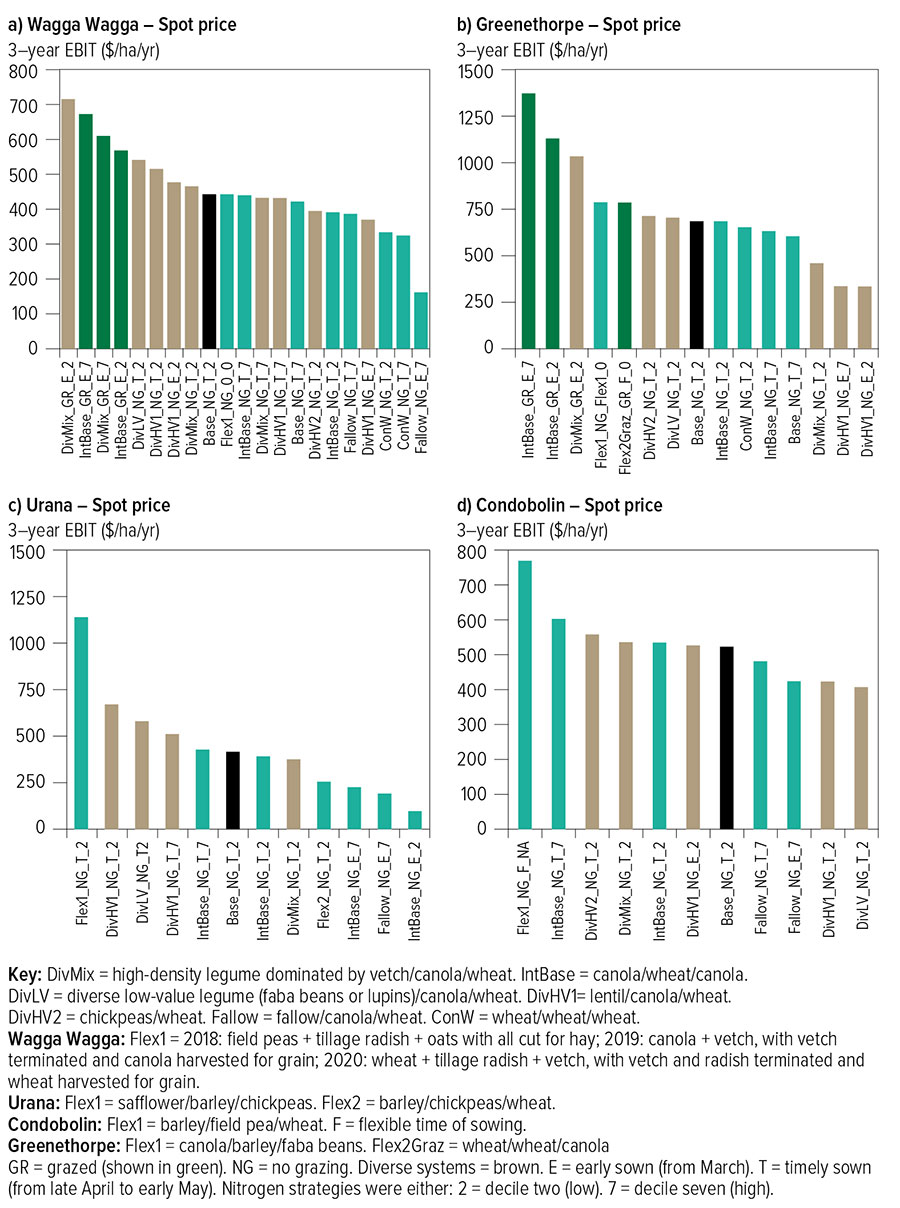 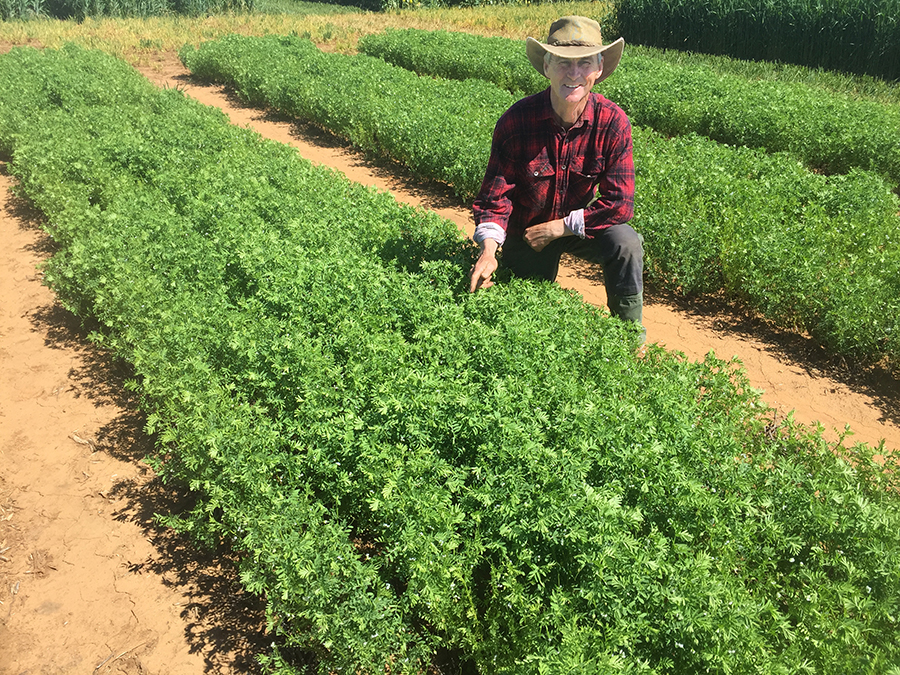 Grower and consultant collaborators also selected a subset of 16, 12 and 11 farming systems for Greenethorpe, Condobolin and Urana respectively. 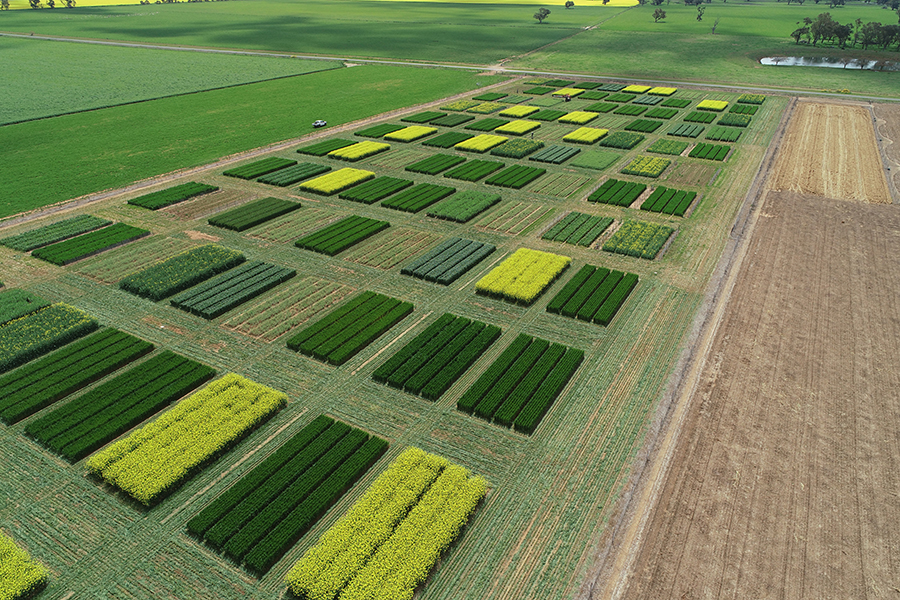 At all sites, the systems evaluated were replicated three times and phased (alternated) to capture seasonal interactions.

In addition, a ‘flexible’ treatment managed by consultant collaborators, at each site, was included to investigate the value of a more ‘tactical’ approach.

Management protocols for inputs and decisions such as tillage and stubble management, variety choice, herbicide, fungicide and pesticide applications were agreed by the project team. Decisions were based on best practice and were reviewed continuously.

In addition to baseline sampling and soil characterisation, the researchers collected common measurements to fully understand each system’s performance.

The data collected enabled further research via the Agricultural Production Systems sIMulator (APSIM) and an analysis of the economic returns from various systems and long-term risk. 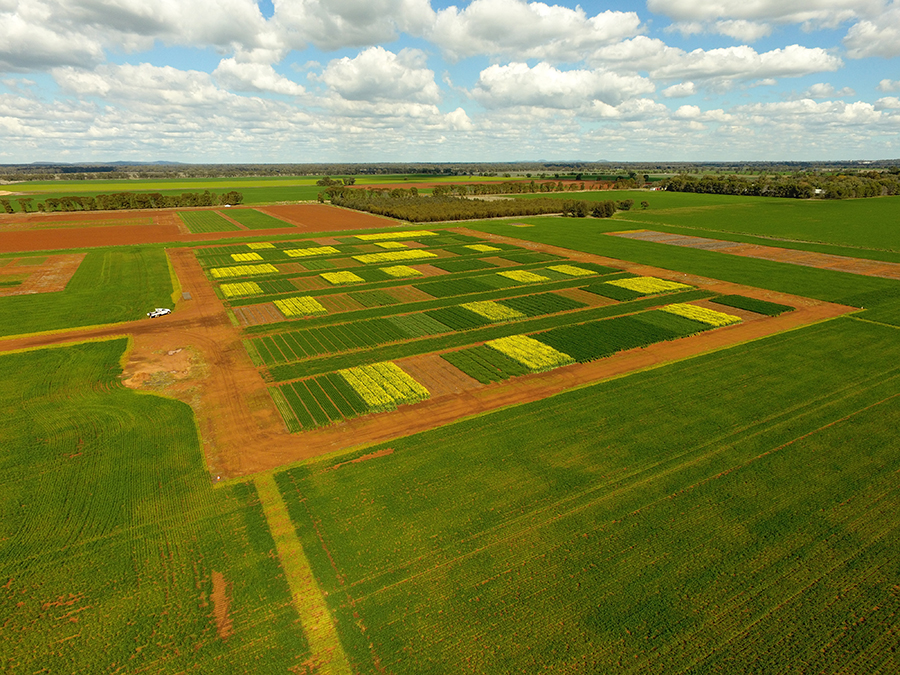 “The average EBIT ranged from $200 to $1200/ha, with some systems demonstrating resilience by showing stability in ranking across years,” Dr Kirkegaard says.

At two sites, he says, there were farming systems that produced annual average profit that was $700/ha more than the baseline.

Some of the diverse cropping sequences with legumes outperformed the canola/wheat/barley and canola/wheat/wheat sequences at all sites during the dry seasons and at two out of the four sites in the wet 2020 season. Dr Kirkegaard says this resulted from the profitability of the legumes, and in some cases the significant legacy of increased soil water (an extra 20 to 60mm) and/or soil nitrogen (an extra 50 to 100kg/ha) available to subsequent crops.

“The legacies of extra water left at harvest had diminished by the following sowing, in some cases, due to reduced soil cover after the pulses, but this depended on the pattern of summer fallow rainfall,” he says.

“Of the non-grazed farming systems, the most consistently profitable system was timely sown, high-value legume, which was either chickpeas or lentils followed by canola and then wheat with a decile-two nitrogen strategy.”

“Farming systems with early sown and early grazed crops were two to three times more profitable than non-grazed equivalents in the dry seasons, even without the added income of the grain harvest, and highly profitable in wetter years,” he says.

“Nonetheless, the legacies of dry soil reduced available grazing biomass and grain yields in the second dry year, especially on the shallower soil at Wagga Wagga.” Grazed wheat and canola crops produced more forage and higher grain yields, he says, demonstrating they were responsive to higher nitrogen supplied by fertiliser and via legume crops grown in rotation.

“In all cases, the early sown and non-grazed farming systems were less profitable than the baseline, partly because of the limited variety choice for this practice and the high value of the grazed forage,” he says.

Dr Kirkegaard says the optimistic (high) nitrogen strategy provided increased biomass for grazing crops or hay cuts but had either no effects or negative effects on grain yield and profit in the dry 2018 and 2019 seasons.

“Nonetheless, nitrogen that was not used in the dry seasons carried over to improve biomass and grain yields in the wet 2020 season, where residual nitrogen from the legume crops and applied fertiliser significantly increased grain yields,” he says.

“Accordingly, the decile-seven nitrogen strategy was more profitable over three years than the decile-two strategy in the canola/wheat/wheat/ and the wheat/canola/barley systems. 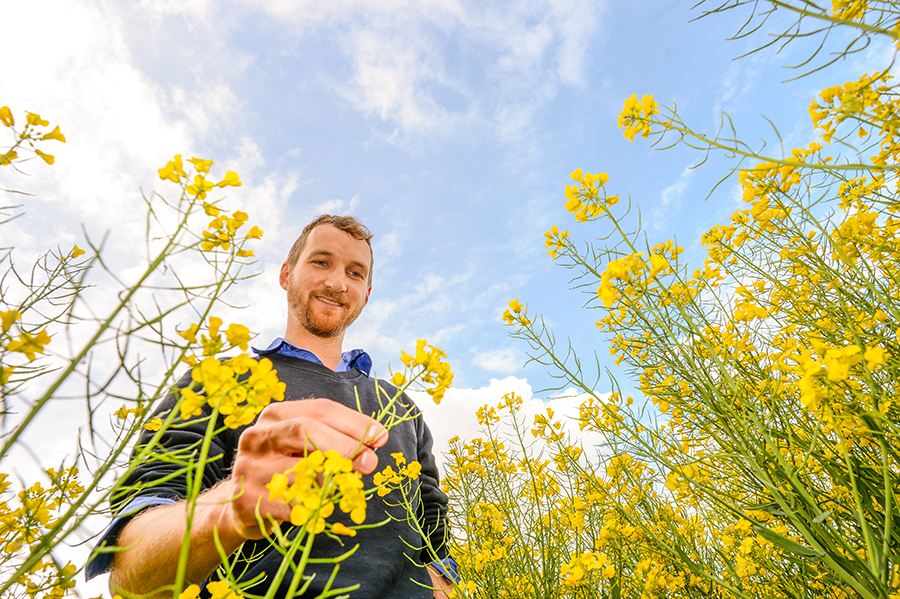 Dr Kirkegaard says average annual EBIT were calculated over the three-year period from 2018 to 2020 for each system and these were ranked from highest to lowest.

“We used actual ‘spot’ costs and prices and compared the results with long-term average costs and prices,” he says. “The analysis showed, with a few exceptions, that there were only minor changes to the ranking of the systems that were cost or price dependent.”

CSIRO farming systems scientist Dr Jeremy Whish performed a range of long-term simulation studies, which capture the water and nitrogen impact only (not weeds and disease).

Dr Kirkegaard says these showed the annual median EBIT of different systems in the range of $400/ha to $1400/ha, which was consistent with the experimental outcomes.

“Interestingly, at all sites, the diverse crop sequences incorporating legumes with lower nitrogen rates are generating some of the highest gross margins with less variability across seasons,” he says.

“These diverse options also combine higher average profit with higher profit in the lowest 20 per cent of years, demonstrating their value in reducing risk and increasing resilience because they are more water efficient in average and poor seasons.”

Disease inoculum levels were measured in 2018 (before) and after the three-year phases in the different sequences (2021) varying in diversity (intensity of cereals).

Dr Kirkegaard says all sites were initially relatively free of serious cereal root disease levels, with only crown rot at Urana in the high-risk category and take-all at Greenethorpe in the medium risk category.

“Over the course of the experiment, there were relatively few concerning increases in disease levels overall, however there were significant changes at some sites in disease inoculum levels according to the sequences.”

Some of the consistent and noteworthy shifts in disease inoculum levels included:

In terms of disease expression, he says, the major disease observed in 2018 and 2019 was crown rot.

“In the wetter 2020, leaf diseases were more critical, with a significant number of fungicides used to control disease in all crops,” he says. “Before fungicide was applied in July, the severity of yellow leaf spot was ranked at Greenethorpe.”

The results showed continuous wheat (wheat/wheat/wheat) had the highest disease severity at 4.5 on a zero to 5 ranking, followed by the baseline (canola/wheat/wheat) at 3.2 and the diverse systems (legume/canola/wheat) the lowest at 1.0 to 2.0.

By way of example, he pointed to the Wagga Wagga results, where the continuous wheat (one-in-one intensity) yielded 5.2t/ha of grain.

“The one-in-two canola/wheat/canola sequence and two-in-three canola/wheat/wheat or canola/wheat/barley rotation yielded 6.4 to 6.9t/ha,” he says. “Diverse sequences with only one wheat in three years yielded 7.0 to 7.5t/ha.”

In addition, he says, the more-diverse rotations were more responsive to higher nitrogen, indicating higher grain yields may have resulted from healthier roots.

Initially, Dr Kirkegaard says, there were no problematic weeds at any of the sites.

“We used best-practice weed management in each system, so the effects of different farming systems on weeds are reflected more in the average annual weed control cost and in changes in weed number and spectrum based on weed seedbank counts,” he says.

“After three years, overall weed numbers declined at Greenethorpe and Urana by about 50 per cent and remained relatively unchanged at Wagga Wagga and Condobolin.”

By 2020, there were few differences in weed numbers between the different systems at all sites.

“At Wagga Wagga, where toad rush and annual ryegrass were issues, and Urana, where toad rush, Indian hedge mustard and wild oats were the main weeds, there was no difference between the different farming systems,” he says.

“At Greenethorpe, where fumitory, mustard, fleabane, prickly lettuce and Shepherd’s purse were the key weeds, weed numbers were lower in continuous wheat, presumably because effective control of broadleaf weeds occurred every year.”

“There was no annual ryegrass issue in the experiments, but glyphosate-resistant ryegrass was encroaching from the surrounding paddocks,” he says.

“At Condobolin, there were lower weed numbers in the canola/wheat/canola system, presumably because of the option to use herbicide-tolerant canola every second year.”

Dr Kirkegaard says some of the important observations about weed control costs included:

Experiments at all four sites will continue for another three years to explore the long-term impacts of different seasonal conditions, farming systems, sowing times and nitrogen strategies on system profitability, efficiency and risk in converting rainfall to profit.