Dryland farming and crop rotation in times of drought

Dryland farming and crop rotation in times of drought

Canola crops are an important part of the rotation on Ton and Whitney van Dijks' Gippsland farm, in Victoria.
Photo: Jeanette Severs

Ton and Whitney van Dijk began cropping at Winnindoo, in Victoria, when they bought their 100-hectare dryland farm in central Gippsland, in 2009 - which was an extremely dry year. They later extended their holding with a lease on 185ha.

Like many operations in Gippsland, their cropping program is mixed with livestock - in their case, raising, breeding and trading cattle.

Ton, originally from Holland, was brought up on a small farm.

He completed an agriculture degree and worked pro bono establishing a farm at a Romanian orphanage. He arrived in Australia 14 years ago to research dairy farm grazing regimes.

"They wanted someone with fresh eyes and a different perspective," he says.

That led to another dairy role on a Winnindoo farm - and more time at the Romanian orphanage - until an opportunity came to buy land. For Ton van Dijk, adding canola to his crop rotation significantly improved the health and fertility of his soil. Photo: Jeanette Severs

Ton and Whitney were already leasing a block at nearby Seaton, where they raised beef-dairy-cross calves for the meat market.

"This farm at Winnindoo came on the market," Ton says.

"We had nothing, but my sponsor helped me negotiate a purchase agreement to buy 45 per cent of the farm, providing the investment. We began cropping on day one."

They purchased the remainder of the property with a commercial loan.

"I took advice and direction from what other farmers were doing in the district," Ton says.

"After four years, I decided to grow canola and that has changed so many things.

"It's something else in the rotation. It fixed the soil up and I consistently grow a 2.5 tonne/ha crop.

"I had to learn about the soil.

"You have to fall a couple of times before realising - 'I'm doing something wrong here'."

It's something else in the rotation. It fixed the soil up and I consistently grow a 2.5 tonne/ha crop. - Victorian grower Ton van Dijk

The majority of soils within the region do not naturally contain lime.

"The fertility of (our) soil is getting better every year," Ton says.

"I'm happy with where it is, but it can definitely still improve.

"I've taken soil tests that showed me pH needed to be addressed, which we have been doing through the application of potash.

"In a normal year, I apply potash with urea as a top-dressing. Potash is really important for root development.

"Phosphorus and pH levels have gone up to a level I'm happy with and gives me a buffer to pull back in a year like this."

Normally he would sow seed with 80 to 100 kilograms/ha of monoammonium phosphate.

"I always put a bit more gypsum than I need to with canola, so I'm building up the soil level; it works like a conditioner," Ton says. 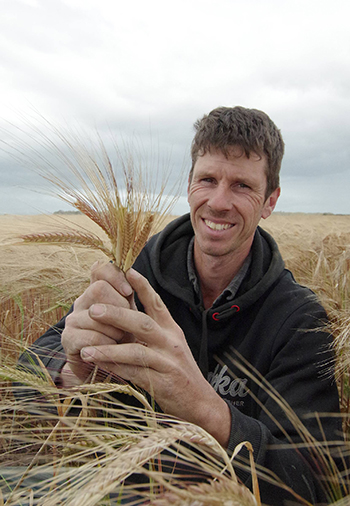 During the drought, Ton van Dijk is focusing on cropping barley on half of his Gippsland farm. Photo: Jeanette Severs

The crop rotation includes sowing: a Pioneer long-season canola; winter wheat - Revenue (PBR) - for several years; before growing Manning (PBR) in the past two years - and the remainder to Beaufort (PBR) spring wheat, barley, oats or triticale. Fungicide is limited to one to two passes annually.

With drought affecting the growing season over the past two years, Ton had to rethink his crop rotation, placing a greater emphasis on barley this year.

"Three years ago I'd never have got a barley crop up on my farm," he says.

"Last year, we entered the cropping system with a bit of subsoil moisture, the crops germinated on no rain, but the weather stayed dry," Ton says.

"When the grain cleaner arrived in January (2019), I told him to clean enough barley so I could sow a mono-crop if I had to."

Sowing in 2019 was at the start of May. The ground was dry, with a 17-millimetre rain event in March and 17mm in April coming off the back of a hot summer.

"It's not enough. We had zero subsoil moisture," Ton says.

"Then in May, we got 66mm and it rained until September.

"Effective rainfall during the year was above 250mm, but less than 300mm.

"But I think we were better off last year, because we had the rain at the right time.

"I wasn't going to sow canola, but I got offered Victory, an imidazolinone-tolerant variety, so I monitored it to see how it grows.

"I sowed it and it started raining and at the start of harvest I headed a couple of rows that (were indicating) it was likely to go 1.8 to 2t/ha."

Ton says in 2019, close to half the cropping area was planted to Planet (PBR) barley, sown at 80kg/ha.

"I budgeted for a 3.5 to 4t/ha yield. I'm still learning how to gauge yields. It looks like it's going to go 5t/ha, and the agronomist says it's got every potential to go 5 to 6t/ha," he says.

"If half the farm is in barley this year, what will I put in next year?

"Some of it will be canola obviously.

"Oats, giving flexibility, can be used for grazing, silage or hay.

"In Gippsland, our challenge is the weather. For croppers, we need to work out, if we can get these type of yields in a tough season, how we can push inputs to achieve better yields in a good season, while still looking after soil health?"

GRDC has set up an information hub for dealing with the dry.