The grains industry is a critical part of regional centres and contributes to their economies.
Photo: Arthur Mostead

Australia may have ridden on the sheep’s back for a large part of the 20th century, but nowadays agriculture’s contribution to the economy is more evenly spread across several sectors. Grain and oilseed production are worth about $9 billion a year at the farm gate and represent nearly one-quarter of farm exports.

A new GRDC-invested report has drawn a comprehensive picture of the grains industry’s value to regional economies. Produced by the Regional Australia Institute (RAI), the report highlights the importance of grains to rural employment, as well as detailing other positive socio-economic impacts in rural areas.

The report, “The grains industry’s value in regional economies”, was based on quantitative and qualitative research which looked at how the industry’s value differs across different types of regions. The measure of ‘value’ included total grains employment and the proportion of grain jobs in local economies, as well as measures of gross value and tonnage. The report also draws on in-depth case studies in the northern, southern and western grain-growing regions.

The research shows that for every 100,000 tonnes of grain produced, there are an average 87 grain production jobs in the northern growing region, 121 in the southern region and 54 in the western region. 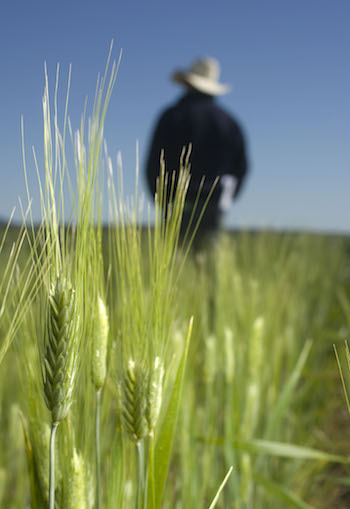 A report has uncovered a significant fall in the number of people employed in grains production in recent years. Photo: Paul Jones

RAI chief economist Kim Houghton says the research looked holistically at grains production and employment in Australia “to see which areas really stood out, and what that meant for the flow-on effects of grains production in these regional economies”. It combined analysis of Australian Bureau of Statistics data with on-the-ground research in three regions – Goondiwindi in Queensland, the Indigo Shire in northern Victoria and the Beverley shire in Western Australia.

Dr Houghton says the report’s primary author, RAI senior researcher Hayley Achurch, spent time in each region talking to people involved in grains production, processing and transport. “Hayley got a real sense from those people about how the industry fitted into the other things that were going on.

That is where we started to get the sense that grains processing was gradually being centralised in places other than those three shires, and that there was often a tension in relation to managing the peaks and troughs in employment, both in processing and production.”

The report will be valuable when considering the infrastructure needs of different regions, Dr Houghton says. “The report shows how important grains production and processing is for different parts of regional Australia. And when it is important, just what that looks like in terms of a share of a local economy or share of local employment,” he says.

“It shows that there are more jobs associated with grains production in some parts of the country than others. So the prospects for grain as a driver of rural economies varies quite a bit, depending on which grain growing region you are in. And I think there are some interesting implications there for regional development – how the shape of those economies is going to change over the next 10 to 20 years.”

Dr Houghton says the research uncovered a significant fall in the number of people employed in grains production in recent years. “On a dollar-for-dollar basis, the contribution of grains to regional economies is strong, and likely to keep growing given the way our farmers are improving their production values. But the direct employment contribution is generally going to keep falling.

“With growers adopting new technologies to adapt to labour shortages and to remain internationally competitive, there is a growing shift from low-skilled agricultural workers through to medium and high-skilled technologists. They will be smaller in number than the labourers used to be, but they will still be there. And that is where there might be some skill shortages.

“In higher-skilled and professional aspects of grains production, particularly in some parts of the country such as WA, there is some transferability between those skills and the mining sector, for instance. So we get a sort of tension in the labour market in WA between people who have the skills and capabilities to work at the more advanced end of grain production, the processing, versus the lure of mining jobs in the same state. There is an interesting medium-term implication there for grain growing regions.

“So while we might worry that there are limited options for future agricultural work for labourers, I think the sky's the limit in terms of some of these technology-related jobs.”

Comparisons of employment levels with financial value and tonnage revealed three points about how the grains industry operates in different regions. The report found:

For regional economies, the proportion of local jobs that grains contributes is important, not just the raw total number of jobs. This requires different consideration than the overall industry productivity view.

Backbone of the regions

GRDC head of industry and government relations Justin Crosby says the report shows there is one grain production job for every 1196 tonnes of Australian grain produced.

“This report clearly shows that grain growers are the backbone of many of Australia’s regional economies and demonstrates the critical importance of ensuring that they continue to be profitable,” Mr Crosby says.

“Regions with a high proportion of grain production jobs, compared with the national average, have a specialisation in grain production and are more dependent on the success of the grains industry for economic outcomes,” he says.

“These specialised regions are strongly concentrated in the WA wheatbelt, the Yorke and Eyre peninsulas in SA, the Grampians region in Victoria, central NSW and inland south-western Queensland.”