A diverse collection of chickpea lines has been imported from hot locations around the world, such as ICARDA in the Middle East, by the University of Sydney through the Australian Grains Genebank.
Photo: Brad Collis

Hot finishes are common in the northern cropping region and result in significantly lower quality and yield for chickpeas. As the climate changes, these hot finishes are expected to become more frequent, lowering grower returns.

For this reason, over the past four years the Legumes for Sustainable Agriculture research hub at Narrabri in north-western NSW has been researching strategies and producing pre-breeding lines that will allow growers to produce the best possible yields and quality in these circumstances.

With GRDC investment, a diverse collection of chickpea lines has been imported from hot locations around the world by the University of Sydney through the Australian Grains Genebank.

These locations include the International Crops Research Institute for the Semi-Arid Tropics (ICRISAT) and other institutions in India, the International Center for Agricultural Research in the Dry Areas (ICARDA) in the Middle East, and countries in Africa, Asia, Europe and North America.

The collection amassed some 1200 lines from a wide range of latitudes and longitudes across the world, as shown in Figure 1.

Figure 1 Countries from which lines have been sourced for heat stress testing in Australia. A range of traits were selected to ensure a wide genetic variability to capture heat-tolerant types. Seed colour has no known connection with heat tolerance and needs to be bred out of commercial lines to meet market acceptance. Breeding out traits such as this is one of the reasons pre-breeding and breeding can take so long.

Figure 2 (A) Seed of BH 112, a heat-tolerant line from India. (B) The green-seeded trait has been removed through crossing with PBA Seamer. 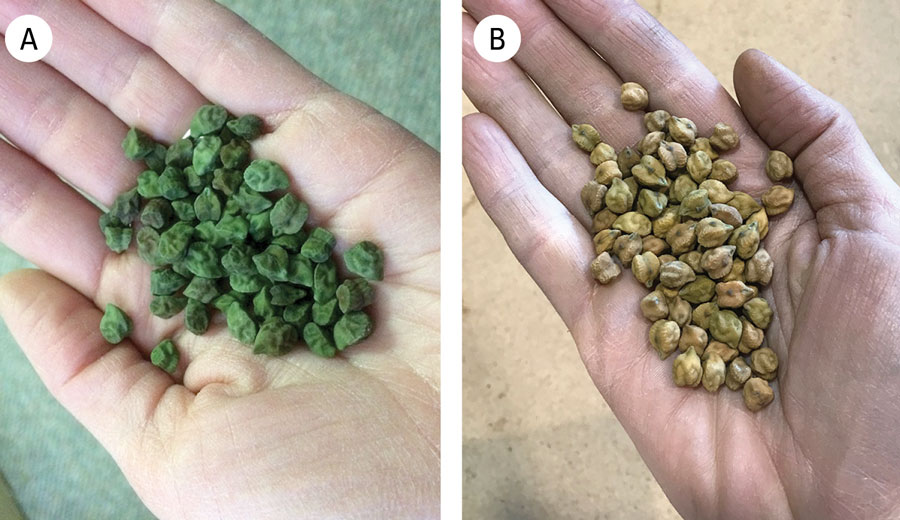 The agronomic suitability of these lines was checked in the field at Narrabri and the best of these were tested in delayed sowing or summer trials to check their performance under heat (also at Narrabri).

Basic yield potential, flowering time (to check that the lines do not flower late), plant structure (which relates to harvestability with Australia's large headers, as some of the internationally sourced chickpea lines are very short and/or prostrate) and seed size were all determined in these field trials.

Several mechanisms for heat tolerance have been validated in the northern region through this process, building on previous work by other researchers. This has included maintaining pollen fertility at high temperatures and the ability to recover quickly from (or adjust to) high temperatures.

As chickpeas are known for dropping early flowers, also of interest are lines that initiate podding earlier and finish before the weather heats up, and lines that can fill pods in a short period of time using stored carbohydrates or other mechanisms.

Chilling tolerance (to facilitate early finishing) is being investigated by another GRDC investment led by the NSW Department of Primary Industries. Collaboration between researchers is leading to gains in both areas.

One example is a landrace/traditional cultivar labelled ICC 12654. This is a short, small-seeded desi chickpea from Ethiopia. This line was identified as being heat-tolerant in large field trials in India and has been shown to pod earlier than Australian cultivars in Narrabri field trials in both winter and summer.

An ability to fertilise flowers under hot and cold conditions makes it a prime candidate for increasing temperature tolerance in Australian cultivars.

The time taken to reach podding in summer trials is used as a proxy for reproductive heat tolerance, as lines that can form pods by late January in the field at Narrabri are truly heat-tolerant. This trait is difficult to screen for among early flowering lines in winter trials as they usually mature before they receive extended periods of heat stress.

The research team at Narrabri crossed the most heat-tolerant chickpea lines with adapted Australian cultivars to combine the tolerance with other traits of importance to Australian growers, such as disease resistance and harvestability.

The offspring were tested again over multiple generations to identify the individual plants that had inherited the desirable traits from both international and Australian parents.

This was achieved through a winter/summer rotation that identified heat-tolerant lines in summer, high-yielding lines in winter, and used a combination of short rows, yield plots and single plant selections (see Figure 3).

Figure 3 Pre-breeding cycle for heat tolerance, taking advantage of both summer and winter to select for different characteristics important to growers and simultaneously speed up the breeding process.

Multiple seasons per year provided an accelerated breeding process and a large amount of data available alongside the pre-breeding seed. As the project started in 2016, commercial breeding companies will be able to select lines from the first pre-breeding cycle to cross with their latest breeding material for growers at the end of 2020.

As well as genetic solutions to coping with hot finishes, possible agronomic solutions are being explored.

To this end, 'autumn' chickpeas, where lines are sown in late January/early February and harvested before frost damages productivity (and possibly before a winter crop needs to be sown), are being trialled. This means plants are producing the most valuable part of their growth (the seed) during the milder weather of late March, April and early May.

Preliminary 'autumn' trials found some current cultivars, including PBA Seamer,were able to produce yields similar to conventional sowing dates. However, harvest was difficult as the plants did not 'crisp up and stand up' when it came time to spray out. The appearance and behaviour of plants in April is similar to what is observed in September, except pods have already been set.

In the preliminary trial, multiple sprays were required to kill trial plots and branches were very low to the ground and difficult to harvest. Seed varied in quality as plants had pods at various stages of maturity when they were sprayed out.

Further, there were multiple questions raised about the way such a growing season would fit with farm operations, particularly disease carryover, plant-back periods for residual herbicides and management of summer pests such as heliothis.

Farming systems approaches as well as genetic solutions need to be investigated for chickpea production in a changing climate.

Further experiments are considering ways to overcome such limitations, including:

1. Fitting varieties to the agronomy. The ideal varieties for this system need to be shorter season and less sensitive to photoperiod than current varieties, and have a mechanism by which they stop producing flowers in mid to late April to ensure immature seed is not on the plants when sprayed out. Some cross families produced for the Legumes for Sustainable Agriculture heat-tolerance work already have some of these traits and are being tested.

2. Fitting the agronomy to the varieties. Often shorter-season lines have less branching and may need to be sown at a higher rate. A higher rate may cause moisture stress in April, which may help the plants to finish and dry out even though the air is temperature is mild to cool. Sowing rate and time-of-sowing treatments were included in trials in autumn 2020 to explore these issues.

This preliminary trial at Narrabri will form the basis for larger multi-site research in the future.