A low-risk alternative to irrigated cotton is performing well in western Queensland.

Harvesting his first ratooned crop of irrigated sorghum in late May, western Queensland grower Andrew Milla was happily surprised with the results: the ratooned sorghum yielded 7.5 tonnes per hectare, about 75 per cent of the first harvest's yield.

Andrew has 410 hectares of pivot-irrigated and 1000ha of dryland farming land at Surat, 450 kilometres west of Brisbane. He says the yield exceeded his expectations and the decision to plant sorghum, not cotton, on one of his irrigated paddocks was made last year as a dry-season risk management strategy.

Dr Joseph Eyre from the Farming Systems Research Group at the Queensland Alliance for Agriculture and Food Innovation has been working with Andrew as part of the GRDC-funded "Optimising Sorghum Agronomy" project.

'Dr Eyre says growers could be looking for alternatives this summer too as water storages hit record lows. "It's a topical subject. Bureau of Meteorology figures show that water storage is at its lowest level since the Millennium Drought."

The early sown and opportunistically ratooned irrigated sorghum cropping system offers a lower-risk alternative to cotton in a variety of ways, he says.

The sown crop can be conventionally harvested for grain when water is limiting. Or, in above-average-rainfall seasons, it can be ratooned for a second grain harvest in less time than re-sowing. Abundant ratoon crop residues can also provide additional revenue as hay. 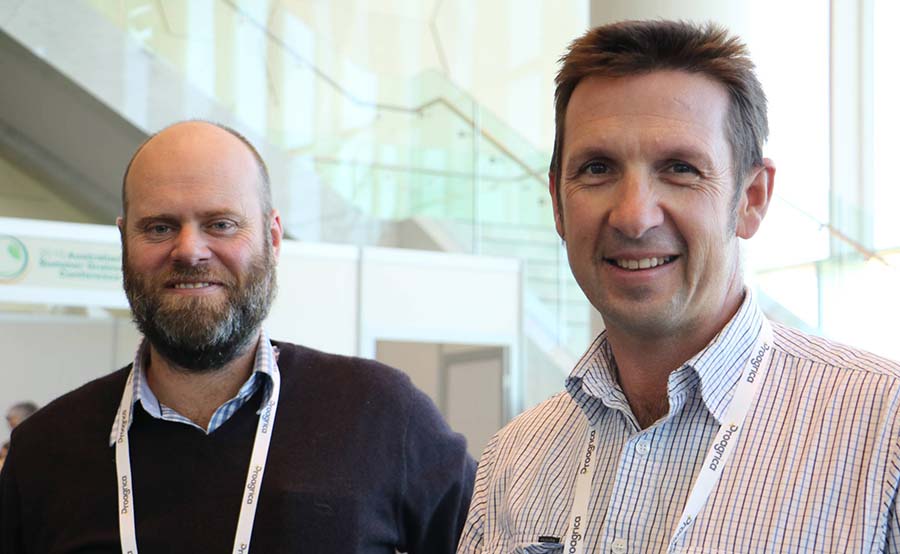 Sorghum is more resilient to drought conditions and requires less water to produce a profitable yield. It also provides a less-risky option than cotton if spray drift from neighbouring paddocks using 2,4-D is an issue. Dr Eyre says sorghum thereby offers growers additional income opportunities and options to manage risk, which are spread over time.

For Andrew, irrigated sorghum provided him with three income opportunities. The original sorghum crop was planted in August 2018, harvested for grain and ratooned in January 2019.

The sown crop averaged 10.1t/ha, his ratoon 7.5t/ha and he baled 7t/ha of stubble for hay. "So, we grew two grain crops and one hay crop in nine months. I think we've found a good alternative. It's been a great result. We're really happy.

"Effectively, we are doubling our income off one pivot for only a few more months of time. If we had not ratooned the sorghum, we would have fallowed to our usual winter crop of wheat or chickpea."

Although Andrew concedes that cotton prices are high this year, he says irrigated sorghum offers other benefits, including flexibility.

"If we had been running out of water, we could have stopped at the first harvest. However, we harvested the grain, then fertilised with urea and turned the water back on for our ratooned crop. If we'd still had water after that, we would then have had the opportunity to plant a winter crop of chickpeas or wheat into the sorghum stubble."

Being able to ratoon sorghum has been helped by QAAFI's work on early sown sorghum as part of the GRDC-funded project.

"We had to plant sorghum as early as possible to do this and had been following the QAAFI work with early sown sorghum," Andrew says.

Dr Eyre says that early sowing increases growing season length for summer crops and that Andrew's success with his ratooned sorghum has shown that it is possible in growers' fields.

Although some growers in central Queensland ratoon sorghum, the practice is newer to cooler southern regions. "It is not common to ratoon grain sorghum but other Surat farmers that attended our field day intend to trial it this coming season," he says. "We are now re-evaluating the critical temperature thresholds for sorghum growth, development and killing frosts. Then we can quantify production potential and risk more widely across the northern region."

As well as the results from Andrew's sorghum crop, the QAAFI team is also getting good results from small plot trials at Surat. Planted on three different dates, each has nine hybrids and four population densities.

Of particular interest are the differences between the sorghum sown on 28 August last year - the second sowing date - which was ratooned at the same time as the third crop was sown on 24 January this year.

"Grain yields were similar for the ratoon and the third sowing date in this dry year when irrigation ran out during flowering for both," Dr Eyre says.

He found the ratoon sorghum was one to two weeks faster and had a larger root mass than the third sowing date treatment. "This suggests that the ratoon crop could avoid water stress. This experiment also highlighted interesting trade-offs between yield potential of ratoon compared to re-sown sorghum and season length."

Andrew's initial success has encouraged him to plant irrigated sorghum again, with the aim of increasing grain yields. "It's a lower-risk crop and you can call it quits if you need to. It is also hardier when water is limited compared to cotton. Sorghum is more forgiving than cotton. With cotton you can see the serious impacts of low water.

"This is our first go. We were not sure when we would get it off or how it would work and it's been great to have Joe and the QAAFI team's input and expertise."

This year, the QAAFI team will trial irrigated winter sown and ratoon sorghum at Cecil Plains, west of Toowoomba. A field day around the end of August will be announced at crop establishment.

Helping will be Dr Erin Wilkus, who joins the QAAFI team for a new GRDC-funded project. It will further investigate what is happening below the ground in early sown sorghum and what that may mean for drought stress.