Scott and Alaina Smith, always on the hunt for productivity improvements, have hosted the first hyper-yielding crop trial in Western Australia on their property at Green Range, 60 kilometres north-east of Albany.
Photo: Evan Collis

Increasing crop yield performance in high-rainfall environments comes with its own unique challenges. Having access to suitably adapted germplasm, managing increased disease and pest risk, high nutrient requirements, standability of crops and paddock waterlogging are just some of these.

“The project has a framework analogous to a pipeline and we are examining the best levers to pull to achieve higher yields at the end of the pipeline,” says FAR Australia managing director Nick Poole.

“There are five field research centres that we call HYC Centres of Excellence, which have about 1000 experimental plots each, covering wheat, barley and canola,” he says.

“There may be four to 10 experimental trials or projects at each centre, depending on crop and region.

“Attached to each centre of excellence are five focus farms – 25 farms in total – and a lead grower network tasked with taking research and development learnings from small plot to paddock scale.”

A comprehensive extension and communication plan is integral to the pipeline and involves field days, results meetings, a media campaign, videos and podcasts, direct mail-outs, social media presence, grower case studies and even a series of HYC awards. “As we are considering both genetic and management levers for production in these environments through this framework, we can pinpoint which has the greatest effect and then fast-track it to adoption through the pipeline.”

WA hosted its first HYC Centre of Excellence at FAR Australia’s Crop Technology Centre in 2020 on Scott and Alaina Smith’s property at Green Range, 60 kilometres north-east of Albany, which had a major focus on barley. Although it is only the first year of data for the site, it is already throwing up interesting findings.

“Matching barley phenology to this shorter-season environment is the major approach to maximising productivity. This has been observed in both winter and spring barleys tested in our first year.

“Longer-season varieties which have performed well in longer-season scenarios in the eastern states have been unable to produce the harvest index and head numbers necessary to achieve high yields in WA."

“However, Rosalind , Laperouse and Maximus CL plus a number of coded lines, look like promising starting points to improve yield potential in high-rainfall regions and then boost performance further with best management approaches. These management tools need to address disease management and head loss if these traits are not inherent in the varieties.”

“Disease resistance and standing power are important genetic traits for crop production in high-rainfall environments. Standing power and resistance to head loss in barley is especially important in coastal regions where winds can cause excessive head loss,” Mr Poole says.

Across all environments an elite screen was conducted with the objective of examining the yield potential of new winter and spring barley germplasm suited to HYC management packages against spring and winter controls in the traditional late April/early May sowing window.

“This means that we have some material that is provided exclusively for the purpose of being evaluated in high-rainfall environments and with appropriately tailored management practices.”

The elite germplasm screening was sown on 1 and 2 May at Scott and Alaina Smith’s property- on a shallow duplex sand-over-gravel-over-clay. The property was clayed in 2017 and then spread (smudged) in 2019-20. This barley was the first cereal sown after two years of pasture followed by canola. Twenty lines were sown in small plots with HYC high-input management and a full foliar fungicide program.

“2020 was a tough year at this site as it received only decile-one rainfall up until the start of August and yields across the board were low for high-rainfall areas,” Mr Poole says (see Table 1).

Table 1:  Yield performance of barley varieties under Hyper Yielding Crops management practices at the Green Range site in 2020. The 20 varieties have different head morphology (2 row or 6 row) and development speed. 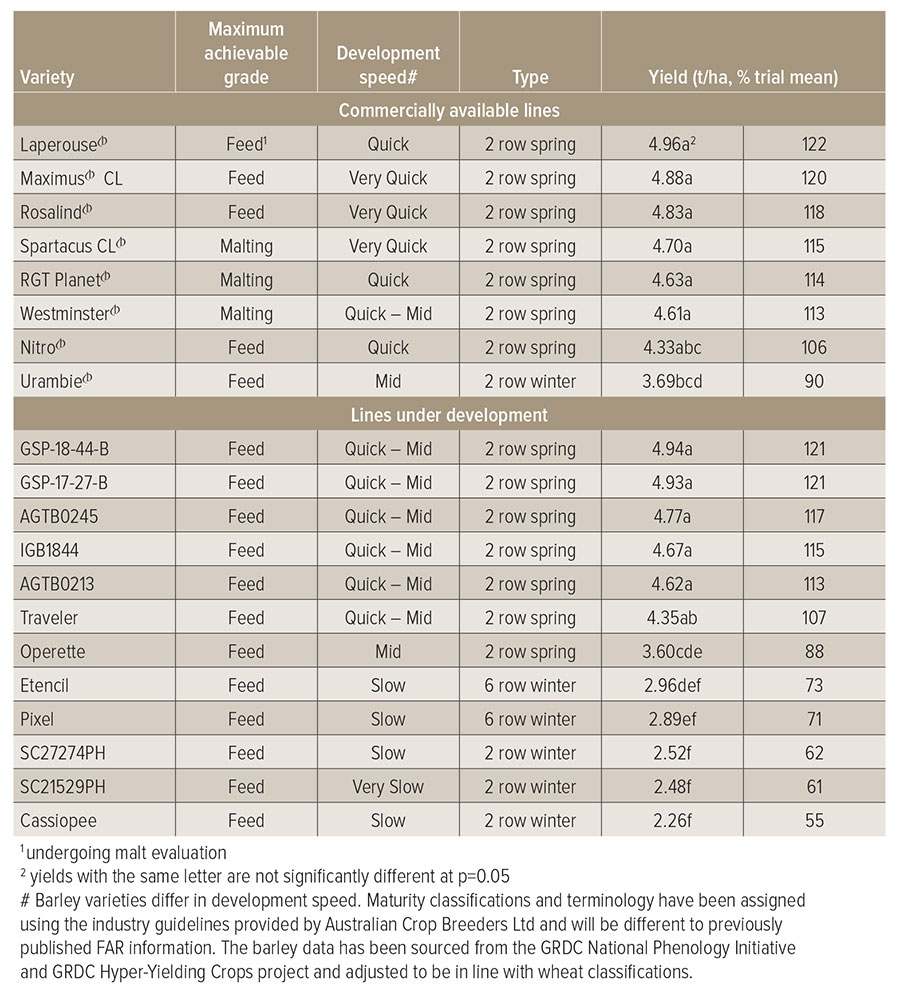 “For this season, we found that the quicker-developing spring varieties were significantly higher-yielding than winter varieties. A dry winter and increased heat during grain fill reduced yields relative to other hyper-yielding environments. Quick spring cultivars achieved higher yields by accumulating more biomass and a higher harvest index.”

Mr Poole says the highest-yielding spring cultivar was Laperouse , a new Australian release, at 4.96 tonnes per hectare and similar to the quick spring cultivar control Rosalind at 4.83t/ha, while the other quick-to-mid control, RGT Planet , yielded similarly at 4.63t/ha.

Urambie was released in 2007 and has an interesting pedigree. It is a cross between a very early barley, Yagan, introduced by the International Maize and Wheat Improvement Center (CIMMYT) and released in WA in 1989, and Ulandra, a dual-purpose grain and graze variety developed by the former NSW Department of Primary Industries barley breeding program, with a cross-back to Ulandra. It has a sowing window from early March to mid-May in southern and central NSW and is therefore adapted to early sowing.

“Results from 2020 suggest faster winter types are required for Australian high-rainfall regions, particularly in the west,” Mr Poole says. “It will require a targeted breeding effort for improved yield potential and faster development speed if we are to improve on older varieties such as Urambie .”

Commercial Australian breeding programs have bred for broad adaptation to yield-limited environments, and for barley the focus has been on quality and uniform seed size for the malt industry – although the introduction of RGT Planet from Europe has shown European spring cultivars are capable of achieving yields similar to Australian material that has been bred for the lower to medium production environments.

Protein levels for this trial were in the range for malting; however, test weights were less than 60 in all winter cultivars, particularly in the six-row winter cultivars consistent with other sites across Australia and experience internationally.

“Overall, matching crop development (faster-developing spring cultivars being favoured) to environment, and fungicide management, had the greatest effect on yield at this site in 2020. This was due to greater harvest dry matter and a better harvest index mirrored in higher head numbers,” Mr Poole says.

“There was limited visual disease symptoms at this site in 2020; however, a significant yield response to fungicide was measured.”

The treatment combining Systiva seed dressing, Folicur at GS31 and Radial at GS39-49 yielded 0.58t/ha higher than the untreated control but was not significantly greater than the single fungicide application. The results were a surprise to the project team, bearing in mind the widespread resistance and reduced sensitivity in a number of pathogens to tebuconazole.

Improving yield in high-rainfall environments might be a matter of better manipulating the components of yield.

“In this respect, we could sow early to capitalise on root growth and greater carbohydrate reserve, and initiate more tillers rather than utilise current winter germplasm options sown early in the HRZ. But we need to know if spring barley is more sensitive to changes in plant density than winter barley,” Mr Poole says.

A trial with increased seeding rates of Urambie , RGT Planet and Rosalind was undertaken to address this idea and phenology deliberately held back by grazing or defoliation in faster spring barley early sown crops.

“Despite the later-than-recommended defoliation date in Rosalind , there was a significant delay in crop development. In other early sown experiments, Rosalind has responded well to this treatment and in frostier environments or in higher-production environments it may be possible to increase yield with this strategy from earlier planting date.”

In a quest for a more reliable high-rainfall environment west of the Albany Highway, the trial site has been relocated to Frankland, 120 kilometres north-west of Albany for 2021. Pipeline activities will continue with research trials and field days and communication activities.

“Research activities will cover the same breadth of GEM aspects as the first year to further consolidate our understandings of the best levers to pull to maximise productivity in these high-rainfall regions,” Mr Poole says.