Oats play a critical role on grower Ash Wiese’s Highbury farm as both a rotation and cash crop.

As such, Ash, who is chair of the Grain Industry Association of Western Australia (GIWA) Oat Council, leapt at the chance to host a trial site for a two-part WA Department of Primary Industries and Regional Development (DPIRD) project, supported by GRDC. The project aims to improve oat agronomy and evaluate domestically and internationally sourced germplasm.

“Our markets are expanding in the food sphere,” Ash says. “Almost all the oats we produce go into human food now, not animal feed. Australia has done well in positioning us into the health and food markets. Our customers want plump grain with high milling standards.

“Previously our receival standards reflected the requirements of the feed market. That’s no longer acceptable to a mill, so we have had to tighten receival standards. We need to protect our reputation as a supplier of premium milling oats, by providing high-beta-glucan, high-fibre, plump oat grains.”

In 2018, a GIWA standards review implemented tightened receival specifications for the 2019-20 harvest. These changes included reducing the groat count from 144 to 72 per two black plastic measures, and introducing an Oat 2 screenings limit of 15 per cent through a two-millimetre sieve, where previously there was no limit.

DPIRD research scientist Georgie Troup, who is leading the oat research project, says these tightened standards mean there is a cliff face if grain quality falls outside the Oat 2 specifications, with no delivery grade consistently available for lower-quality grain.

“Based on an analysis of grain quality from trials in below-average rainfall seasons, it was purported that in those below-average seasons, growers may be required to clean grain before delivery, creating additional work for growers, slowing harvest operations and reducing grower profit,” Ms Troup says.

She says the tightened receival standards mean research is required to support growers to ensure consistency of supply to export markets.

“Previous research has highlighted the range in quality between varieties in response to May sowing, plant density and nitrogen rate, helping advisers and growers to implement the best-bet agronomy for milling oat production. However, there has not been research using varieties currently grown when sown in early April, nor has there been research investigating the influence of changing nitrogen strategy on grain quality, yield and profitability of these early sown crops,” she says.

Ash says he has seen advantages in sowing oats early. “Here we can get April rain and not be able to sow wheat because of the risk of frost damage in spring,” he says.

“Oats are more frost-tolerant, so it allows us to sow early and not be as concerned about the frost window. We’ve changed our system quite dramatically over the past decade. We’re looking for varieties that meet milling quality and give us the flexibility to play the season.”

Ms Troup is excited to continue working with growers to boost productivity. “What we are investigating is how growers like Ash can sow early and be confident that they are growing the right variety, with the best agronomic package to maximise their profitability.

“We also need to understand the impact on the farm business of altering the sowing date. Mother nature doesn’t always deliver rain on schedule; sometimes it’s a late summer rain that can get the crop up and away, and other times the season break isn’t until mid-June. By continuing our efforts in oat agronomy, we are building a resource for growers and advisers that allows them to understand the impact of changes in crop germination date. This understanding will assist with variety selection, agronomy and yield estimates.” 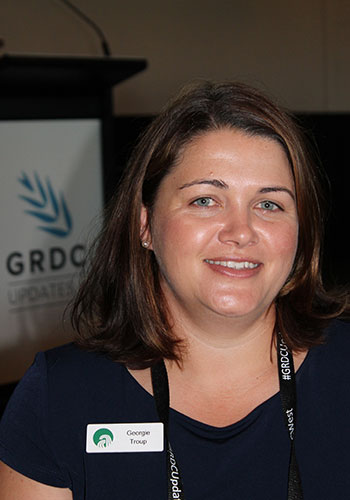 DPIRD established trials on WA farms at three locations in 2019 (Bindi Bindi, Nunile and Highbury) and three locations in 2020 (Dale, Muresk and Wongan Hills). The trials were designed to investigate the opportunity that early April sowing could provide, as well as what the best-bet nitrogen rate and timing is for April-sown oats to increase the likelihood of growers meeting tightened milling specifications.

The trial on Ash’s farm in 2019 illustrated that delaying sowing from early April until early May resulted in an average yield penalty of 11 per cent across all treatments. Yield dropped from 4.3 tonnes per hectare to 3.8t/ha. At the Nunile trial site, the yield penalty because of delaying sowing until early May was 18 per cent. At Bindi Bindi there was a 36 per cent penalty.

In addition to yield improvements, the early-April-sown oats had a higher hectolitre weight and lower screenings than the early-May-sown oats. Early sowing improved the probability of delivering Oat 1-grade oats in a season with a dry finish.

At Bindi Bindi and Highbury, it was also found that the grain yield of the early-April-sown crop was responsive to increasing applied nitrogen rate. However, this response was not evident when sowing was delayed to early May. This is likely to have been due to the relatively short growing season that many areas experienced in 2019. The influence of nitrogen timing in 2019 was not consistent across the three sites.

Ms Troup says that from the results collected in the project so far, it is not possible to recommend a nutrition strategy because the three sites performed differently. She hopes the 2020 harvest results provide more guidance than the results the team observed in 2019.

The project also assessed a wide selection of oat germplasm for its suitability for the WA growing environment.

“With exciting variety development happening both domestically and globally in other commodities, we felt there was an opportunity to investigate what lay beyond the varieties that are currently available to oat growers in the western region,” she says.

“Blakely Paynter (DPIRD research scientist) and I reviewed what was available from the national archive at the Australian Grains Genebank and selected 330 varieties that had a wide range of maturity. In addition, Dr Pamela Zwer of the National Oat Breeding Program provided advanced breeding lines to complete the trial entry list, totalling 360 entries. The trial was sown at Northam and Katanning in 2019 and 2020, in mid-April and May.

We have seen some fascinating oat plants in this trial, with some oats looking more like ryegrass than oats, and some with leaves nearly the width of my hand.

“From the 20 different countries that are represented in these trials, we are working to identify which varieties or breeding lines have a ‘fit’ for the growing season in the western region, by monitoring when the variety reaches the critical growth stage of panicle peep (Z49).

“We sowed in mid-April and late May last year and again this year. By the end of November 2020, there were still a few varieties that had not reached Z49. Some just haven’t been able to reach that critical growth stage, which makes it easy to determine they don’t have a fit for this environment!

“We have seen some fascinating oat plants in this trial, with some oats looking more like ryegrass than oats, and some with leaves nearly the width of my hand. Plant height of the international entries was topped by Sunrise (a selection from an Algerian oat), which reached 2.3 metres. The trial was irrigated at sowing in mid-April to germinate the seed, and then only received growing season rainfall, so there are some impressive performers in there.”

“It might not be the actual germplasm that is used, but the breeders will have the information from this research to guide their development of future varieties, with an understanding of the maturity types that exist and their fit for the western region.”