Standing in front of the seed increase trial at Warwick, Queensland, during 2020, Dr Samir Alahmad holds one of the new experimental lines with modified root traits. The new lines will be evaluated in 2021 to determine the value of the root traits to support yield in key durum growing regions.
Photo: Lee Hickey

A Queensland Alliance for Agriculture and Food Innovation (QAAFI) researcher has identified genes that improve durum wheat yields under drought conditions, as part of work focusing on the architecture of plant roots and how it contributes to yield stability.

Dr Samir Alahmad, who is a previous recipient of Monsanto’s Beachell-Borlaug International Scholarship, discovered the two genes while investigating traits that durum wheat uses to survive in water-limited conditions.

“In dry seasons like 2018 and 2019, farmers suffered significant losses due to reduced grain quality and yield,” Dr Alahmad says. His current research is part of a postdoctoral fellowship funded by GRDC.

Stabilising yields and quality for the crop in a variable climate is a continuing challenge for growers, while demand from international markets is consistent. More than 80 per cent of Australian durum wheat exports go to Italy, where they are used for pasta production.

The first step in Dr Alahmad’s research was establishing links with durum breeder Dr Filippo Bassi at the International Center for Agricultural Research in Dry Areas (ICARDA) to source elite durum lines that were originally bred for very dry conditions in Syria.

Collaborating with Professor Jason Able at the University of Adelaide, Dr Alahmad then crossed the ICARDA lines with the leading Australian durum wheats DBA Aurora and Jandaroi, subsequently developing a large experimental population to study their traits.

“You need six generations to develop genetically stable lines that are suitable for evaluation,” Dr Alahmad says. “I used speed breeding technology, which involves growing plants under optimal light and temperature conditions, to reduce generation time, and refined the population in just one year.”

The next step was to study the durum wheat population for root growth angle using transparent garden pots. Dr Alahmad matched this information with DNA marker data to perform a genome-wide association analysis. The result was the discovery of a major gene located on chromosome 6A in durum wheat.

Over the following two seasons, he set up field trials in Queensland, South Australia and Morocco to better understand the value of the gene in improving yields under different drought conditions.

“We found there was an association between the root angle gene and grain yield,” he says. “In Queensland, root angle appeared to be important for maximising the length of the grain-filling period.”

In another genome-wide association analysis, the location of the gene responsible for high root biomass was identified on chromosome 6B.

“One of the most exciting aspects of the research was discovering that combining the root angle and root biomass qualitative trait loci resulted in a yield benefit of up to 0.9 tonnes per hectare under drought conditions,” Dr Alahmad says. 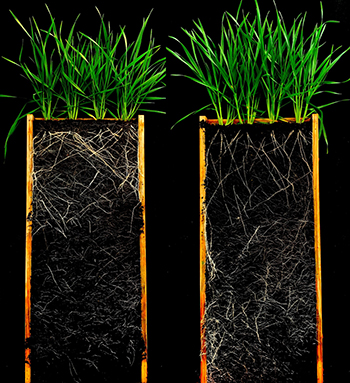 However, more insight is needed to determine how much root branching is beneficial at different soil depths to sustain grain yields in different environments. Another challenge is understanding the complex interactions between root and canopy traits that influence the timing of water use.

During 2020, seed of the elite lines with modified root traits was bulked-up at Hermitage Research Station, Warwick, Queensland. In 2021, field trials will be set up in Queensland and South Australia.

To take the research to the next level, Dr Alahmad is using unmanned aerial vehicles to look at the effect of above-ground traits on drought tolerance.

“We will use this knowledge about the above-ground traits to better understand the value of root traits and the link between root and shoot dynamics,” he says.

“We want to help wheat breeders design future crops for farmers that provide more-stable yields across seasons despite variable rainfall. In the next 12 months we will try to understand the traits that sustain grain yield in different seasons.”