“We need to focus more on a longer-term strategy rather than relying on a short-term tactical approach,” Dr Hunt said.

At the February 2021 GRDC Update at Wagga Wagga, New South Wales, Dr Hunt said yields and profits could be increased and soil organic matter maintained with a longer-term approach to nitrogen management.

Dr Hunt encouraged a review of nitrogen management by considering how much Australian Standard White (ASW) and Australian Premium White (APW) wheat is produced on farms.

“If you’re achieving ASW-grade wheat with less than 10.5 per cent protein, your yields are almost certainly nitrogen-limited and profits will almost certainly be increased by increasing nitrogen application rates,” he said.

“If grain protein is between 10.5 and 11.5 per cent (APW), yields are probably nitrogen-limited, and profits are likely improved by increasing nitrogen application.” For paddocks producing 11.5 to 13 per cent protein grain (Australian Hard wheat), he said yields are most likely not nitrogen-limited.

If protein is more than 13 per cent (Australian Prime Hard category), he said growers might be over-applying nitrogen at the expense of some yield and perhaps profit. However, this depended on whether price premiums were paid for high-protein grain.

“Partial nitrogen balance is the sum of nitrogen inputs from fertiliser and legumes minus the amount of nitrogen that has been exported in grain or hay,” he said.

He pointed to a simple spreadsheet to calculate partial nitrogen balance on the Birchip Cropping Group website: https://www.bcg.org.au/understanding-crop-potential-and-calculating-nitrogen-to-improve-crop-biomass-workshop-recording.

A partial nitrogen balance will indicate whether soil organic nitrogen is in net deficit across the rotation, Dr Hunt said.

He said a high positive nitrogen balance (hundreds of kilograms per hectare of nitrogen) indicates chronic over-application of nitrogen and, while this might be building soil organic matter in stubble-retained systems, increased profitability might be achievable by reducing nitrogen rates. A pre-sowing soil test is essential to determine how much nitrogen is available in the soil. Photo: Nicole Baxter

He said many businesses were not producing wheat that reached its water-limited yield potential, because soil testing and using tools such as Yield Prophet® were time-consuming, complex and considered too difficult, and consequently are not being used widely.

“I think people fear over-application of nitrogen and part of that is concern about losses and haying off. This is a powerful psychological consideration as the belief is ‘I’m paying more to make less’. However, haying off is not as common as it used to be when crops were frequently grown in rotation with legume pastures.”

Consequently, Dr Hunt is encouraging a shift in thinking to long-term nitrogen management.

“Experiments by CSIRO’s Dr John Kirkegaard and NSW Department of Primary Industries collaborators show that if nitrogen is over-applied, most carries over and remains in the soil, available to next season’s crop.”

Additionally, he said it was difficult to hay-off crops with modern agronomy. This was because:

Accordingly, Dr Hunt has developed the concept of the nitrogen bank, or N-bank, where enough nitrogen is supplied each year to maintain nitrogen at a level sufficient to achieve water-limited yield potential in most seasons. In practice, this means choosing an environmentally appropriate N-bank target dictated by annual rainfall and potential yield for each crop location.

Dr Hunt said the N-bank targets for different environments can be derived from crop simulation and represent the most-profitable or least-risk and lowest-loss treatments over the long term.

For example, at Birchip, Victoria, where average yields are three to four tonnes a hectare, he said, the target N-bank was simulated as 125kg/ha. In higher rainfall areas, such as Horsham, Victoria, he said the N-bank target would be higher – more like 175kg/ha.

In a 2021 paper published in Field Crops Research entitled ‘Evaluation of nitrogen bank, a soil nitrogen management strategy for sustainably closing wheat yield gaps’, Dr Hunt said the data showed there was a good relationship between annual rainfall and the optimal N-bank target for the four Victorian locations used for the simulation study (see Figure 1).

“However, this method for calculating the N-bank target rate may not hold up for areas where rainfall is more summer-dominant,” he said. “It may also not work in high loss systems and more research is needed to validate the calculation across a wider number of locations.”

Once the N-bank target is known, Dr Hunt said, mineral nitrogen (nitrate and ammonium) needs to be measured using a soil test any time from March through to June. If done after June, he encouraged sampling the soil from the inter-row to avoid fertiliser that was applied at sowing.

Ideally, he said, soil cores should be one metre deep and segmented into different depths, with at least six cores taken per paddock or production zone. The six cores should be mixed carefully to provide one bulk sample, kept cool and sent to a laboratory as soon as possible after sampling.

“It is best not to include in-season mineralisation in the calculation for required nitrogen, because mineralisation is cancelled out by immobilisation in systems where organic matter is being maintained such as in stubble-retained systems with a neutral to positive nitrogen balance,” he said.

“It is beneficial to soil sample high and low-yielding zones of paddocks independently to get a better picture of what is happening across the paddock. This sampling can also be extended to high and low protein zones for variable rate nitrogen applications.”

Dr Hunt said some growers, such as Broden Holland from Young, NSW, were making variable-rate nitrogen applications for wheat based on protein maps from previous wheat crops.

“Broden is reporting success at achieving higher yield and protein, lower protein variability and has avoided under and over fertilisation within paddocks,” he said.

“But while protein maps are an effective way to inform how nitrogen is best allocated across a paddock, they can’t help with estimating the base rate. Soil testing and the N-bank system is still necessary to achieve this.”

If tested soil mineral nitrogen is below the N-bank target, Dr Hunt said to top up the bank with nitrogen fertiliser using best-practice application tactics. This is generally achieved by applying the most crop nitrogen during early stem elongation (July to early August).

He said the advantage of top-dressing during early stem elongation was there were less likely to be significant nitrogen losses. For example, if 70kg/ha of mineral nitrogen is measured in a paddock, and the N-bank target is 150kg/ha, he said 80kg/ha of fertiliser nitrogen needs to be applied using best practice to top up the supply. This is then repeated every year.

With investment from La Trobe University and the Mallee Catchment Management Authority, Dr Hunt, in collaboration with Birchip Cropping Group and CSIRO, established a long-term experiment at Curyo in north-western Victoria to test the N-bank concept.

The results showed an environmentally appropriate N-bank strategy and Yield Prophet® (matching nitrogen to seasonal yield potential), used similar amounts of nitrogen, were equally profitable and maintained the soil resource. This result was confirmed by simulation studies over many seasons. The experiment and simulation studies indicated that profit was maximised at neutral to slightly positive nitrogen balances.

Dr Hunt said modelling had also shown the N-bank strategy works in southern NSW across a rainfall gradient from Griffith to Young in free-draining soils with at least 147mm of plant-available water capacity.

“Nitrogen losses from the N-bank approach are no worse than they were from Yield Prophet®, but under both of those strategies the losses are higher than what you would see if you applied the national average fertiliser nitrogen rate of 45kg/ha per year.”

CSIRO’S Dr John Kirkegaard said the N-bank approach was about a total nitrogen budget, which needs to be added to crops in the most appropriate way for any given location.

“If you’re cropping on a soil where heavy rainfall events are likely, then the appropriate way for you to add nitrogen might be as smaller multiple applications during the season,” he said.

“The N-bank just tells you the rough total to aim for and then you can decide the most appropriate tactical approach to apply urea on top of that to reduce avoidable losses.”

During the past three years, southern NSW farming systems experiments led by Dr Kirkegaard, in collaboration with the NSW DPI with GRDC investment, have used different crop sequences and nitrogen strategies that exemplify the concept of taking a longer-term view with nitrogen management.

Dr Hunt said the experiments included two nitrogen targets for urea top-dressing decisions, with the first targeting decile-two conditions, which is conservative, and the second decile-seven conditions, more like the N-bank approach.

“The results, during the two consecutive decile-one years of 2018 and 2019, demonstrated the decile-seven approach was less profitable in those years; however, the decile six 2020 season showed significant responses to carry-over nitrogen that had been applied in previous years,” he said. 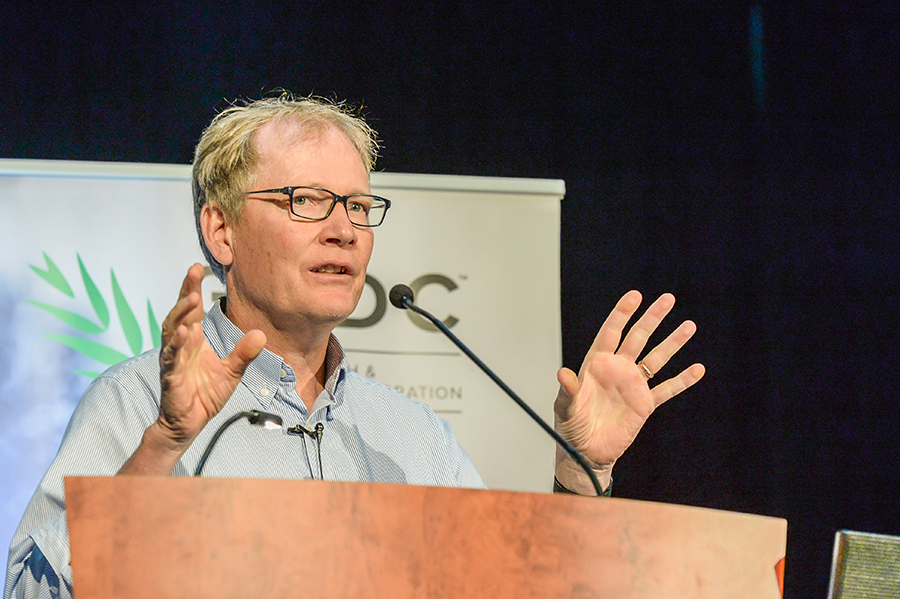 Dr Kirkegaard said the decile-seven strategy approach was often more profitable over the three-year sequence in the canola/wheat/barley sequence.

While these results were encouraging, Dr Hunt said the research to test the N-bank concept had only been done at one site over three seasons.

“We don’t know yet what the N-bank target should be in specific environments and need to better understand how much nitrogen is being lost and immobilised,” he said. “We also don’t know about the effects of how the N-bank strategy interacts with legumes.”